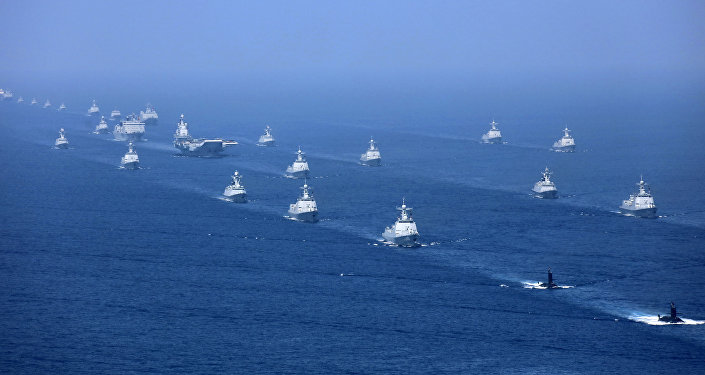 Although the US does not officially challenge Beijing's position that Taiwan is part of China, Washington has been contacting Taipei directly and recently increased its navy activity in the Taiwan Strait under the pretext of ensuring free passage through it.

The United States administration is becoming increasingly concerned that Beijing might be ready to “take more risks” in relation to Taipei, with Chinese President Xi Jinping expected to embark on a third term, the Financial Times reported.

“China appears to be moving from a period of being content with the status quo over Taiwan to a period in which they are more impatient and more prepared to test the limits and flirt with the idea of unification,” an unnamed senior US official told the outlet.

According to the official, the new US administration monitored Beijing’s behaviour for the past two months before reaching the conclusion.

The official said that the Biden administration is concerned that the Chinese president “sees capstone progress on Taiwan as important to his legitimacy and legacy."

“It seems that he is prepared to take more risks,” the official said.

Top White House Asia official Kurt Campbell also told the FT that compared to other policy areas, China has been the most assertive in its approach to Taiwan.

“…nowhere have we seen more persistent and determined activities than the military, diplomatic and other activities directed at Taiwan,” he said.

Taiwan on the other hand doesn’t seem to share the concerns, as one senior Taiwanese official said there was no sign of an imminent attack, the FT says.

The news comes amid continued tense relations between Washington and Beijing, after the first high-level, in-person talks between the US under the Biden administration and Chinese officials in Alaska.

The Secretary of State Antony Blinken said before the meeting that the US would “discuss our deep concerns with actions by China, including in Xinjiang, Hong Kong, Taiwan, cyber attacks on the United States, economic coercion of our allies,” and White House Press Secretary Jen Psaki said that the Biden administration would approach its relations with China “in lockstep” with its partners.

After the meeting, the US State Department said that the parties had “serious discussions,” while China's top diplomat said that "many major differences" remained.

Previously, Blinken used the word "country" when he mentioned Taiwan during a congressional hearing, breaking a previous taboo among US officials about using such language to refer to the self-governing island to avoid irritating China.

China considers Taiwan as a breakaway province that should be reunified with the mainland, and Chinese authorities often protest strongly if government officials or companies around the world call Taiwan a country.

According to a bilateral State Department fact sheet, the US and Taiwan are in an unofficial relationship, but Washington does not support the island's independence. A 1979 pact with China switched US diplomatic recognition to Beijing, although the Taiwan Relations Act, passed by Congress the same year, allows Washington to support the island's defensive capabilities.