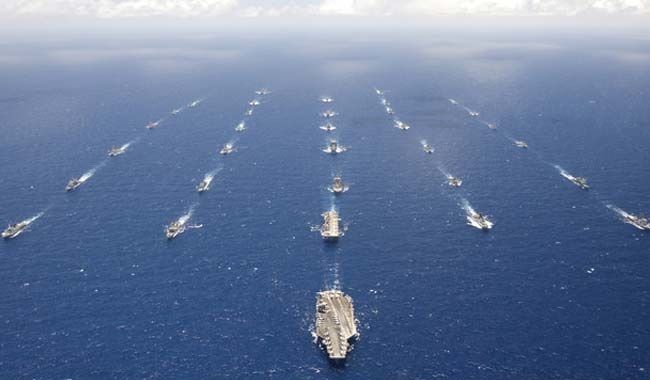 Japanese PM and US Admiral John Aquilino shared concerns regarding China's unilateral attempts to alter the status quo in the region and exchanged views on North Korea's test-firing of missiles, Kyodo News reported citing the Japanese government.
Amid China's military rise, Japanese Prime Minister Fumio Kishida on Thursday met with the commander of the US Indo-Pacific Command and agreed to strengthen their alliance for a free and open Indo-Pacific.

The US Indo-Pacific commander committed to "deliver a free and open Indo-Pacific, and peace and stability and prosperity for the region." Aquilino also met Thursday with Japanese Defense Minister Nobuo Kishi and newly appointed Foreign Minister Yoshimasa Hayashi.

This comes after General Koji Yamazaki, Chief of Staff of the Japan Joint Staff and Admiral John Aquilino bilaterally presided over the eleventh Joint Senior Leaders Seminar in Tokyo, from November 9-10.

The US Indo-Pacific Command, in a statement, said General Yamazaki and Admiral Aquilino acknowledged the common security challenges and a shared vision to transform the Alliance, in which interoperable units seamlessly conduct bilateral operations in peacetime and during regional contingencies.

"Under dramatically changing security environment, Japan-U.S. Alliance has been the cornerstone for the peace and stability of the region for over 60 years, and it will continue to be so. To that end, I continue to share the visions for the future with ADM Aquilino like we just did through the seminar," said GEN Yamazaki. "Furthermore, SDF will accumulate truly effective effort, such as bilateral exercise with the U.S., to swiftly respond to any contingencies."

Both leaders agreed to implement a shared vision to strengthen Japan Self-Defense Force and US forces interoperability, future readiness requirements, and integrate JSDF involvement in a multilateral regional security framework.

"The strong bond between Japanese Self-Defense Force and the U.S. Joint Force represent an important aspect of our alliance," said Adm. Aquilino. "Our common devotion to freedom, democracy, human rights, and the rule of law, unites us, and events like JSLS help us continue to prepare for tomorrow's challenges together."

The Japan-US Alliance is vital to peace and stability in the Indo-Pacific, and Japan Joint Staff, US Indo-Pacific Command, and US Forces Japan remain committed to strengthening the Alliance together, the statement said.
Add Comment