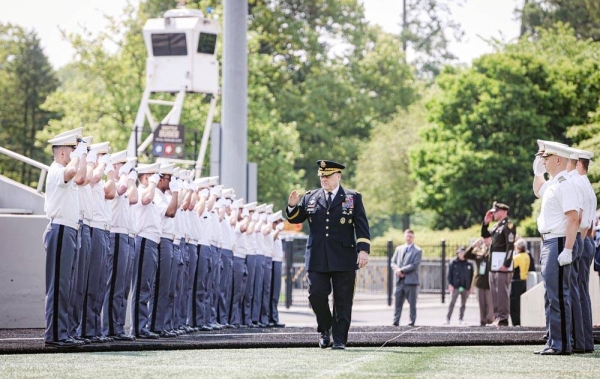 US challenged in every domain of warfare - Gen. Milley

The United States Chairman of the Joint Chiefs of Staff Mark Milley said Saturday that the United States of America “is challenged in every domain of warfare: space, cyber, maritime, air and land.”
Milley told the US Military Academy Class of 2022 graduation ceremony in West Point, New York, “There is the mother of all technologies, artificial intelligence, where machines are actually developing the capacity to learn and to reason.”

He stressed, “In your world, you’re going to have to optimize yourselves for urban combat, not rural combat. That has huge implications for intelligence collection, vehicles, weapons design, development, logistics, camo and all of the other aspects of our progression.”

Furthermore, Milley said, “It will be your generation that will carry the burden and shoulder the responsibility to maintain peace, to contain and to prevent the outbreak of great-power war.”

“We are also on the cusp of a change in the fundamental character of war,” he continued. “The nature of war is not going to change. It’s still a political act. It’s a decision by humans to impose their political will on their opponent by the use of violence.”

Milley also reiterated that the 2022 graduates of the US Military Academy are the United States’ most valuable assets; its most significant asymmetric advantage and they represent what is inherent in the US military.

As keynote speaker at the graduation ceremony today, the chairman told the graduates they are critical to the military. “[You] have become a team,” he said. “And you’re going to be drawing upon each other for the rest of your lives.”

Milley told the graduates, who were commissioned as second lieutenants, they represent the quality that gives America its unique strength. “You are what makes the United States undaunted by the difficult, and motivated by the impossible,” he said.

It was at the end of World War II that leaders designed the US military’s rules-based international order, and that structure is today under intense stress, the chairman said.

At this very moment, a fundamental change is happening in the very character of war, he said. “We are facing, right now, two global powers: China and Russia, each with significant military capabilities, and both fully intend to change the current rules-based order.”

And in Ukraine, we are learning the lesson that “aggression left unanswered only emboldens the aggressor,” Milley said. “Let us never forget the massacre that we have just witnessed in Bucha. Know the slaughter that occurred in Mariupol. And the best way to honor their sacrifice is to support their fight for freedom and to stand against tyranny.”

As the United States is entering a world that’s becoming more unstable, the world the graduates are being commissioned into has the potential for significant international conflict between great powers, he told them. “And that potential is increasing, not decreasing,” he added.

“You’re entering a different world,” he said. “The United States is under significant challenges in Europe, Asia, the Middle East and Europe. We see revanchist Russia, as we have just witnessed another invasion in Ukraine.

“In Asia, we are in the third decade of the largest global economic shift in 500 years, resulting in a rapidly rising China as a great power with a revisionist foreign policy backed up with an increasing capable military.”

Also, in Asia, the United States is faced with North Korea, which is rapidly increasing its missiles and deliverable nuclear weapons, he said, adding in the Middle East and in parts of Africa, we continue to see instability from terrorism in many places.

“[The] maturity of various technologies that either exist today or are in the advanced stages of development, when combined, are likely to change the character of war just by themselves,” Milley noted.

In the future, the chairman said, we can, through rigorous analysis, determine what the world will look like. There will be a lot of surprises along the way in development of forces and weapons, but the structure and organization of our joint forces is going to have to change drastically, he said. All of us must be open-minded. We can no longer cling to concepts and organizations and the weapons of the past, he added.

And we must develop leaders who have incredible character under the intense pressure of ground combat, and there is nothing greater than ground combat leaders who will make the right moral and ethical choices, along with the right tactical choice in the most emotionally charged environment you will ever face, he told the graduates, adding, “Each of you are those leaders.”

“As you march into your future, have the vision to change and to prevent war from happening in the first place,” he said. By maintaining peace through the strength of the US military, and the example of our values, it is up to you, today,” he added.
Add Comment