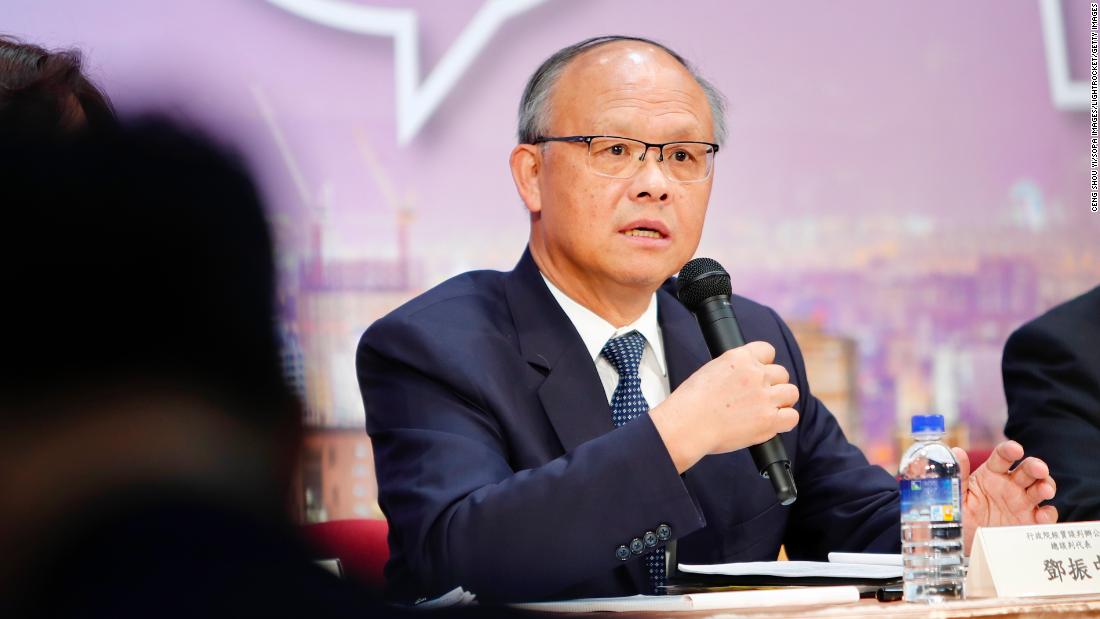 Listen to the article
0:00 / 0:00
Voice by MediaWorks
The US and Taiwan unveiled a new trade initiative, Taiwan's trade representative announced Wednesday, after Taiwan was excluded from the US Indo-Pacific economic initiative that President Joe Biden formally announced in Asia last week.
The new initiative -- the US-Taiwan Initiative on 21st Century Trade -- marks the official launch of trade negotiations between Taiwan and the US. It is a precursor to signing a free trade agreement, Taiwan's trade representative John Deng said at a news conference on Wednesday.

The Office of the United States Trade Representative said in a statement that a key goal is to "develop an ambitious roadmap for negotiations for reaching agreements with high-standard commitments and economically meaningful outcomes."

Deng hailed the initiative as a "historic breakthrough" for Taiwan as it opens up space for more trade and economic cooperation with the US. He added that it includes important elements of a regional trade agreement, which could lead to a prompt inking of the "highly anticipated" bilateral trade agreement between Taiwan and the US.

The launch of the initiative will run parallel towards Taiwan's continuous efforts in joining the Indo-Pacific Economic Framework for Prosperity, Deng added.

Deng will travel to Washington, DC, at the end of June to participate in the first meeting under the initiative.

The Biden administration said Tuesday that US officials were negotiating with Taiwan to develop a new trade initiative.

In a call with reporters, an administration official said through the initiative, "we intend to explore ways we can deepen our bilateral economic and trade relationships and deliver concrete outcomes for our people."

"In the days and weeks ahead, we will move we will move quickly to develop a roadmap for possible negotiations, followed by in person meetings in Washington DC next month," the official said. "Key areas for our negotiations include trade facilitation, regulatory practices, agriculture, anti-corruption, supporting our small and medium sized enterprises, outcome on digital trade, labor rights, the environment, standards, state owned enterprises and non-market practices and policies."

The talks come after Biden unveiled his long-awaited Asian economic plan in a speech in Tokyo -- the Indo-Pacific Economic Framework for Prosperity, or IPEF -- which includes 13 partner countries. But it doesn't include Taiwan, which had been an open question as Biden was preparing a plan meant to create an economic sphere to counter China's growing influence in the region. On Tuesday, officials seemed open to ultimately including Taiwan in IPEF - even while developing a similar framework bilaterally.

"We are committed to finding ways to deepen trade investment with Taiwan, which is why we developed this initiative," a senior official said. "We think that this initiative will allow greater focus on our partnership with Taiwan and greater tailoring of the conversation and the unique characteristics of our trade relationship."

The official said that while that while Taiwan wasn't included in the "initial launch" of IPEF, "going forward, we intend to take a flexible and adaptable approach to IPEF participation."

"There's still ... time in the process," the official added.

The deal won't require congressional approval, officials said, because there are "no market access requirements" included. Still, one official wanted to "underscore that we will be engaging ... pretty substantially with Congress and other stakeholders."

"Obviously, there's a lot of interest more broadly on the Taiwan relationship and on the substance of what we are doing here," the official added. "There obviously is a lot of dialogue happening with Congress more broadly on these issues, and we'll be going forward with them."
#Joe Biden
Add Comment