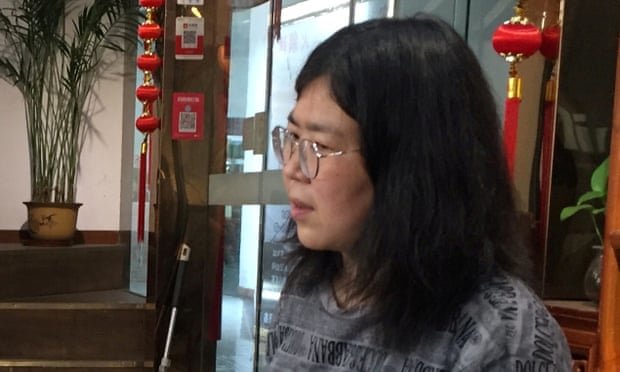 US and EU pressure China over release of Wuhan citizen journalist

Zhang Zhan, who reported from city at start of pandemic, was sentenced to four years in jail
The European Union and United States have demanded that China release a citizen journalist jailed for her reports on the early outbreak of the coronavirus pandemic from Wuhan.

A Chinese court handed down a four-year jail term on Monday to Zhang Zhan, who reported at the peak of the crisis in the city where the coronavirus first emerged. Her lawyer said Zhang was jailed on the grounds of “picking quarrels and provoking trouble”.

The US secretary of state, Mike Pompeo, said in a statement he strongly condemned Zhang’s conviction and called for her immediate and unconditional release, accusing the Chinese Communist party (CCP) of restricting and manipulating information about the Covid-19 outbreak in Wuhan.

US-China relations have plunged to their worst level in decades as the world’s top two economies spar over issues ranging from the coronavirus outbreak, Beijing’s national security law for Hong Kong, trade and espionage.

The EU also called for Zhang’s immediate release, as well as for freedom for the jailed human rights lawyer Yu Wensheng and several other detained and convicted human rights defenders and individuals who engaged in reporting in the public interest.

“According to credible sources, Ms Zhang has been subject to torture and ill-treatment during her detention and her health condition has seriously deteriorated,” an external affairs spokesperson for the EU said in a statement.

In a statement, the EU called for the immediate release of the group and their swift return to Hong Kong from Shenzhen, where they went on trial on 28 December in a closed court and without appointed lawyers of their choice.

The EU criticism over the cases comes a day before EU and Chinese leaders are expected to clinch a deal to give European companies better access to the Chinese market.

Zhang was among a handful of people whose first-hand accounts from crowded hospitals and empty streets painted a more dire picture of the pandemic centre than the official narrative.

Critics say that China deliberately arranged for Zhang’s trial to take place during the holiday season in the west, to minimise scrutiny.

“The restrictions on freedom of expression, on access to information, and intimidation and surveillance of journalists, as well as detentions, trials and sentencing of human rights defenders, lawyers and intellectuals in China, are growing and continue to be a source of great concern,” the EU spokesperson said.
#COVID-19  #Covid  #Coronavirus
Add Comment