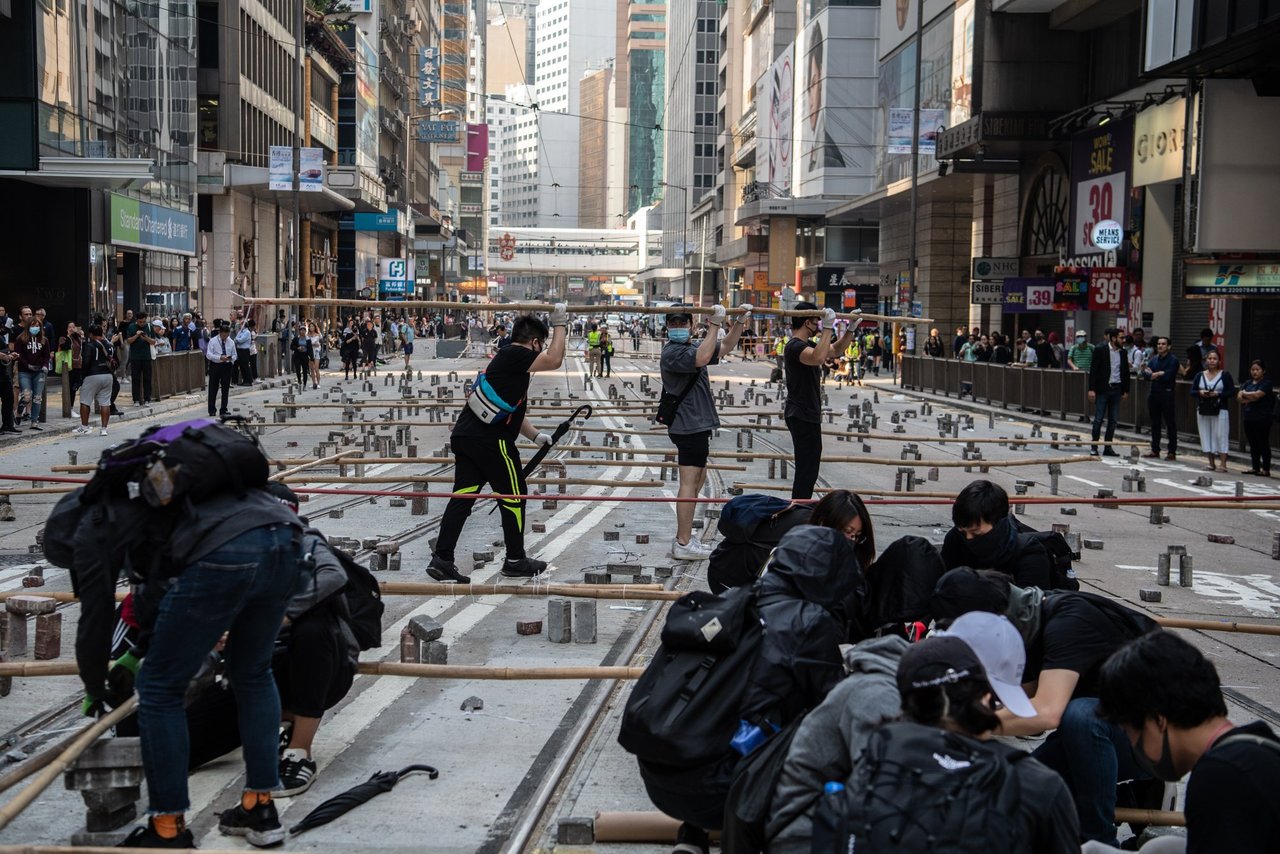 Hong Kong has seen many violent days since the unrest began in June, but the disruption this week has taken things to a new level -- and fears are growing as to what may come next.

Protesters paralyzed the city on Wednesday for a third straight day, disrupting subway lines and blocking roads. Tear gas swirled through the Central financial district, while police also battled university students far from the city center. A 70-year-old man was in critical condition after being hit by a brick-shaped hard object during scuffles, according to local newspaper Ming Pao.


More disruption was expected Thursday, with subway operator MTR Corp. suspending part of its rail network. The Cross-Harbour Tunnel, a main artery between Kowloon and Hong Kong Island, was blocked after protesters vandalized toll booths. Schools from kindergarten to college were also shut on Thursday, the first time the government ordered them to close during the unrest.

The prolonged turmoil marks a shift in intensity in the protests, which have mostly been confined to the weekends apart from sporadic efforts to disrupt the Monday morning commute. That has raised fresh worries about an economy already in recession, with the Hang Seng Index losing 1.8% on Wednesday for its lowest close in three weeks.

“At the 30,000 foot level, you’re seeing a confluence of rising violence but also dwindling protester numbers,” said Kevin Yam, a lawyer, political commentator and member of the Progressive Lawyers Group, which has pushed for greater democracy in Hong Kong. “If you ask me where this is going to go, I have no idea,” he added. “In many ways we’re in slightly uncharted territory.”

Hong Kong’s government again sought to reassure residents it could contain the chaos and called for an end to the violence. Lam has repeatedly insisted she won’t give in further to protester demands, which include an independent inquiry into police violence and the ability to nominate and elect the city’s leaders.

In Beijing, state-run media ratcheted up the rhetoric. Hong Kong is at “the most critical juncture” as violent acts of “black-clad rioters” come close to terrorism, the official Xinhua News Agency said in a commentary.

The Global Times hinted in a Wednesday commentary that the central government could employ “direct intervention” under the Basic Law it uses to govern Hong Kong. “The rioters’ rampage is a short drive from the nearest outpost of the Shenzhen Armed Police Force and a short walk from the People’s Liberation Army in Hong Kong,” it said.

Yet while fears of a Chinese intervention have long persisted since the demonstrations began, it’s unclear if the situation has reached a tipping point. Any Chinese troops or police in Hong Kong would raise questions about the city’s autonomy, potentially putting at risk U.S. trade privileges at a time when the mainland’s economy is struggling.

In the U.S. on Tuesday, Senate Majority Leader Mitch McConnell vowed to work on legislation supporting pro-democracy protesters in Hong Kong, drawing a rebuke from Beijing. The bill would subject the city’s special U.S. trading status to annual reviews and provides for sanctions against officials deemed responsible for undermining Hong Kong’s “fundamental freedoms and autonomy.”

The latest spell of violence in Hong Kong intensified on Friday after a student died of injuries sustained near a police dispersal effort last week -- the first fatality linked to protests after months of unrest. Things got even worse on Monday after a protester was shot by a traffic cop, triggering widespread violence that has continued ever since.

The Hong Kong Police Gunshot That Unleashed a Day of Mayhem

Commuters found themselves stuck again on Wednesday morning as activists disrupted rush-hour traffic in protest of the government’s response and police tactics. Services including the entire East Rail Line and parts of the Kwun Tong and West Rail lines were shut due to vandalism and protest actions, and numerous bus lines halted.

Even the city’s famed big banks, for which employee safety memos have become routine, have expressed new caution in urging staff to work from home as violence escalates on the streets outside their doors. A popular annual Oxfam hiking fundraiser was also canceled.

The Chinese University of Hong Kong, which has seen some of the most intense clashes in the past few days as police sought to retake a bridge over a busy expressway near the campus, announced it was canceling classes for the rest of the semester.

“There has been a gradual escalation,” said Joseph Cheng, a retired political science professor and pro-democracy activist. “But the mood so far is still very much against the government, and that explains why the disruptions on weekdays are still being tolerated.”

The protests kicked off in June over opposition to legislation allowing extraditions to mainland China, and soon morphed into a wider movement about China’s increasing grip on power. Though they started peacefully, protests have become increasingly violent in recent months with no end in sight.
For now, the government is just trying to get life back to some semblance of normalcy in Hong Kong.

“We’re moving from protests to cat-and-mouse, individual acts of violence,” said Lam from the Progressive Lawyers Group. “That could well be where we’re going with this, unless the government does something to defuse the situation. But it doesn’t look like it’s doing that.”