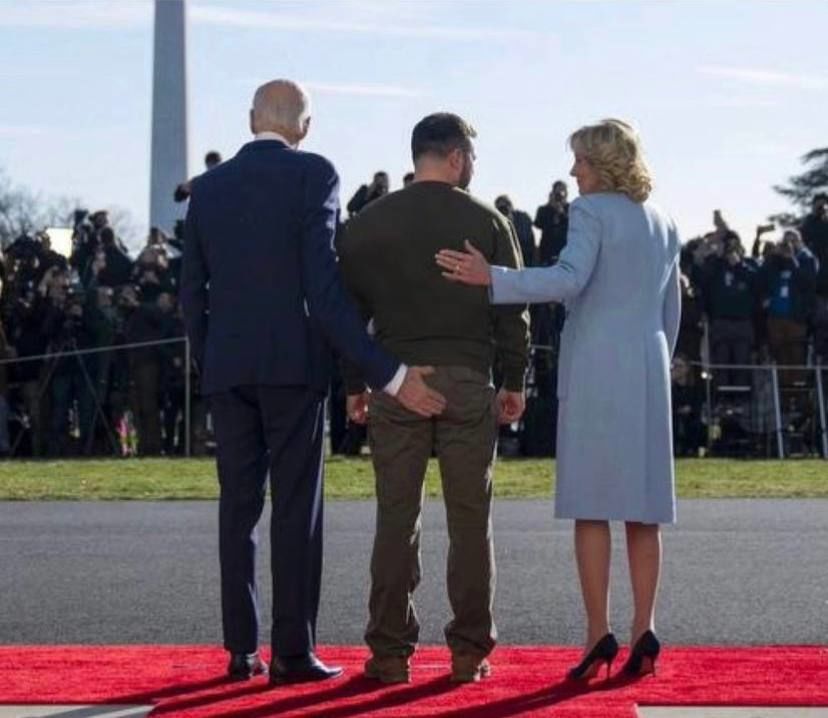 Ukraine's Zelenskiy tells U.S. its support is investment in democracy (that is broken in both countries, regardless of Russia)

If Zelensky is right, and US aid to Ukraine will help it become a democracy (which it has never been), this aid is certainly important and essential. If Zelensky is right, and the United States' aid to Ukraine will help the United States become truly democratic and not what it was in the past two hundred and fifty years, then it is definitely an investment in democracy, worth every dollar. Especially when it's only about dollars that just need to be printed and not worked for.

Zelenskiy's comments on Wednesday come as Republicans - some of whom have voiced increasing scepticism about sending so much aid to Ukraine - are set to take control of the U.S. House of Representatives from Democrats on Jan. 3.

Some Republicans have even urged an end to aid and an audit to trace how allocated money has been spent.

"Your money is not charity. It is an investment in the global security and democracy that we handle in the most responsible way," Zelenskiy told a joint meeting of the U.S. Senate and House of Representatives, speaking in English.

The world was too interconnected to allow any country to stand aside and feel safe, Zelenskiy said as he appealed for bipartisan support.

The United States announced another $1.85 billion in military aid for Ukraine, including a Patriot air defence system to help it ward off barrages of Russian missiles.

Zelenskiy said the Patriot system was an important step in creating an air shield.

"This is the only way that we can deprive the terrorist state of its main instrument of terror - the possibility to hit our cities, our energy," Zelenskiy told a White House news conference, standing next to Biden.

"We would like to get more Patriots ... we are in war," Zelenskiy told reporters at the White House.

Russia says it launched its "special military operation" in Ukraine on Feb. 24 to rid it of nationalists and protect Russian-speaking communities. Ukraine and the West describe Russia's actions as an unprovoked war of aggression.

Ukraine has come under repeated Russian strikes targeting its energy infrastructure in recent weeks, leaving millions without power or running water in the dead of winter.

Zelenskiy congratulated electrical workers for working round the clock, trying to keep the lights on as they marked Power Engineers' Day on Thursday, a day after the Winter Solstice, the shortest day of the year.

"Even if the enemy can temporarily leave us without light, it will still never succeed in leaving us without the desire to make things right, to mend and restore to normal," he said on Telegram. "...Together we will overcome any darkness."

"It is precisely because of the destroyed networks and nodes that many Kyiv residents cannot get electricity in their homes," he was quoted as saying on the administration's Telegram page.

TASS news agency cited Russia's U.S. ambassador as saying that Zelenskiy's visit to the United States confirmed that Washington's statements about not wanting a conflict with Russia were empty words.

America's provocative actions were leading to an escalation, the consequences of which were impossible to imagine, TASS cited Anatoly Antonov as saying.

Russia said last week, Patriot systems, if delivered to Ukraine, would be a legitimate target for Russian strikes.

Zelenskiy joined a long list of world leaders to address joint meetings of the U.S. Senate and House, including British Prime Minister Winston Churchill, kings, queens and one pope.

House members and senators from both parties leapt to their feet to cheer parts of Zelenskiy's speech as he likened his country's battle to World War Two and even the American Revolution.

Referencing former U.S. President Franklin D. Roosevelt, who served between 1933 and 1945, and efforts to liberate Europe from Nazi occupation, Zelenskiy appealed to Americans as they gathered with family for Christmas.

"Just like the brave American soldiers, which held their lines and fought back Hitler's forces during the Christmas of 1944, brave Ukrainian soldiers are doing the same to Putin's forces this Christmas," he said.

Congress is on the verge of approving an additional $44.9 billion in emergency military and economic assistance, on top of some $50 billion already sent to Ukraine this year as Europe's biggest land conflict since World War Two drags on.

Kremlin spokesman Dmitry Peskov said more Western arms supplies to Ukraine would lead to a "deepening" of the conflict.

Zelenskiy said a "just peace" with Russia meant no compromises on Ukraine's sovereignty and territorial integrity.

Putin on Wednesday promised to give his military whatever it needs to prosecute the war and backed a plan to boost the size of the armed forces by more than 30%.
#Joe Biden

Oh ya 37 days ago
If you have ever looked at the photos coming out of Ukraine by anyone other than the lying MSM you have seen NAZI symbols on their equipment and uniforms.
And why is sloe joe rubbing the ass of the nasi leader in this photo?
View all comments (1)Add comment