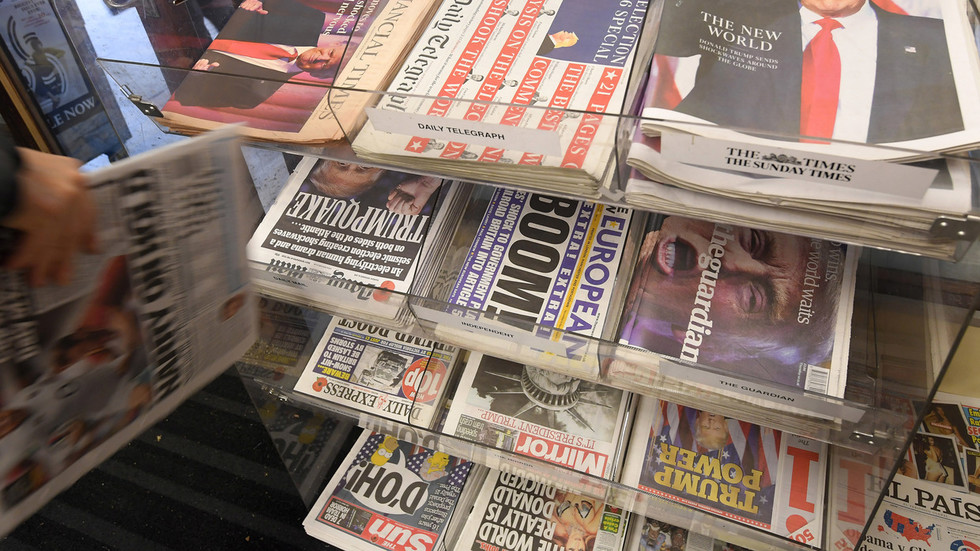 UK press acts as ‘appendage of the state’ when reporting on foreign policy, new analysis shows

A new analysis of British media’s coverage of foreign policy has found that, by and large, the UK press acts as “an appendage of the state” and has been “misinforming the public” and “failing to report” completely on key issues.

The statistical analysis was carried out by Declassified UK, a new “public service journalism” project investigating Britain’s foreign,military and intelligence policies and run by journalist and historian Mark Curtis.

What ‘rules based order’?

On Twitter, Curtis said the current state of UK press reporting on foreign policy is “shocking” and that the media was “systematically misinforming” the public on numerous issues, as well as routinely “falsely reporting” on the UK’s “supposed benevolent role” around the world.

5/ On 29 October, UN special rapporteur Nils Melzer wrote to the UK government urging it to investigate officials for possible “criminal conduct” in their stance towards Julian Assange. This has not been reported by the UK press. https://t.co/5YcXVbzPy0 pic.twitter.com/KIPZKs419o

Among its findings, Declassified UK said that the term “rules-based international order” has been used in 339 press articles over the past five years - and that Britain is invariably cast as an upholder of that order, despite being “as much a violator of international rules as any official enemy.”

Yemen, Syria and the OPCW

When it comes to the war in Yemen, the press has “overwhelmingly failed” to report the extent to which this is also a British war due to its key role in arming Saudi Arabia.

While many articles covered UK arms exports to Riyadh, “no articles could be found” mentioning the UK's role in storing and issuing bombs for Saudi aircraft and maintaining warplanes at key operating bases.

The UK media has also mostly “ignored” British military support programs in Saudi Arabia itself, showing a “lack of interest on the part of journalists to expose key aspects of UK foreign policy,” it said.

On the war in Syria, the Times and Telegraph have reported only “sporadically” on Britain's involvement in the conflict, while the Guardian has accused the UK of having “failed to act” in the war-torn country - despite the fact that Britain began covert operations in Syria as early as 2011.

If anyone is still under any illusion that the British press, including titles like Guardian and Independent, are broadly reliable on foreign policy, or at least not seriously misleading, the research by Mark Curtis should dispel it.

In addition, comments from former OPCW director Jose Bustani noting “irregular behavior” in the watchdog's controversial Douma investigation were reported in “only one” press outlet — the Mail on Sunday. Three whistleblowers raised the alarm last year about what they claim was the suppression of key information from the OPCW’s official report on the alleged chemical attack, but their concerns have received little airing by British journalists.

The UK press has also failed in its duty to report fully on the case of jailed WikiLeaks founder and whistleblower Julian Assange, the analysis found. “No UK press outlet” has written about UN special rapporteur Nils Melzer’s letter to the government calling for officials to be investigated for “criminal conduct” in relation to Assange’s case. Melzer has repeatedly said that Assange is being subjected to “psychological torture” at Belmarsh Prison.

In contrast, the British press frequently highlights UN reports on the torture and imprisonment of journalists in foreign countries, it noted.

Despite reporting in Israeli media on the “unprecedented” recent British-Israeli military cooperation, there was no coverage by the UK press of Israel's first-ever deployment of fighter jets to Britain last year — or of an admission in parliament in 2018 that the UK was offering military training to Israel.

The analysis also found that GCHQ’s covert action program known as JTRIG has been specifically mentioned “less than a dozen times” in the national press since Edward Snowden revealed it in 2014 — and all were brief mentions in articles focusing on other subjects. “This is in sharp contrast to the vast attention paid to Russian covert programmes,” Curtis wrote.

The research, which is the first in a two-part series, covered national print media and did not include the national broadcasters like the BBC.

Ultimately, the study found that the British public is being “bombarded” by views which support the priorities of UK policymakers and there is only a “very small space” in the British press for independent analysis of foreign policy.