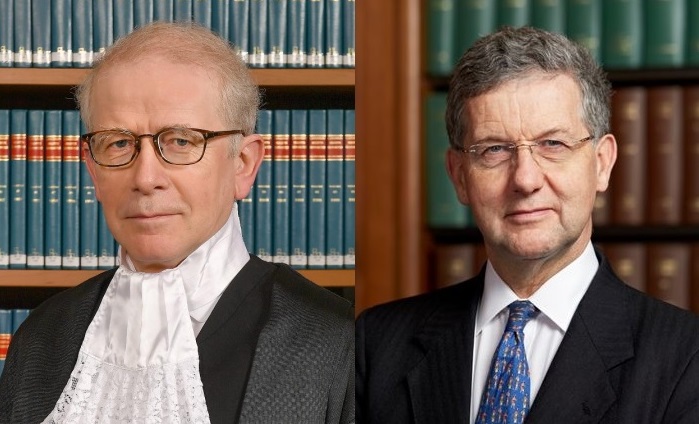 The withdrawal of two senior British judges from Hong Kong's highest court was "politically motivated," said Chief Executive Carrie Lam Cheng Yuet-ngor as she accused British politicians of attempting to override the UK judiciary.
President of the UK Supreme Court Robert Reed and another judge Patrick Hodge submitted their resignation as non-permanent judges of the Hong Kong Court of Final Appeal on Wednesday. They said they cannot continue to sit in Hong Kong "without appearing to endorse an administration which has departed from values of political freedom and freedom of expression."

British Prime Minister Boris Johnson also supported the two judges' decision to resign: "The constraints of the national security law make it impossible for them to continue to serve in the way that they would want."

Speaking at a press conference on Thursday, Lam said it was reasonable to suspect that there were political motives behind their resignation. She accused politicians in the UK of trying to override the judiciary and interfere with the judges' actions or decisions.

She said the resignation was announced an hour before a debate at the British parliament about the judges.

"Soon after, the Foreign, Commonwealth and Development Office of the UK said it is no longer tenable for serving UK judges to sit on Hong Kong's top court," Lam said, describing it as political arrangements.

She accused the British government and politicians of resorting to measures to destroy the judicial system in Hong Kong. She added she believed judges in Hong Kong would continue to be free from political manipulation and to "administer justice without fear and bias."

Lam continued that she found Reed's statement – that they "cannot continue to sit in Hong Kong without appearing to endorse an administration" - to be "strange." She said they should not stop serving the judiciary because they do not support the administration.

She said overseas non-permanent judges came to Hong Kong to show their support and affirmation of Hong Kong's judicial system, judiciary, and independent judicial power, rather than the executive authorities here. They were never required to take an oath to support the government.

The chairman of the Bar Association, Victor Dawes, said he did not believe the departure of the two judges was free from political pressure and he did not want politics and diplomacy to stand in the way of the rule of law and judicial independence.

He said their withdrawal would definitely hit the city in the short term but believed that the city's highest court would continue to fulfill its constitutional responsibilities and uphold the rule of law.

He also called on the public and overseas communities to not jump to conclusions about the resignations.

Dawes revealed the Bar Association, together with the Law Society, had made efforts to communicate with the British government two weeks ago when they learned the two judges would resign.

Law Society vice-chairman Roden Tong Man-lung said the Court of Final Appeal has only heard one application for bail related to the national security law so far.

He said that after the resignation of the two British judges, four local judges and 10 non-permanent judges from other common law jurisdictions will remain and perform their duties.

It was believed that the Judicial Officers Recommendation Commission will consider inviting judges from any common law jurisdiction to sit on the court in accordance with the Basic Law, including judges from Malaysia, Singapore, or India, as has been proposed.

A spokesperson for the Chinese Embassy in the UK slammed the British political manipulation in withdrawing the British judges, saying the UK was interfering in Hong Kong affairs and China's internal affairs.

He also said since the implementation of Hong Kong's national security law, Hong Kong society has returned to stability, and the rule of law has been upheld.

Legal sector lawmaker Ambrose Lam San-keung said it is time for the Hong Kong judicial community to be its own master, as Britain’s so-called "judicial independence" is nothing more than rhetoric to deceive the world.