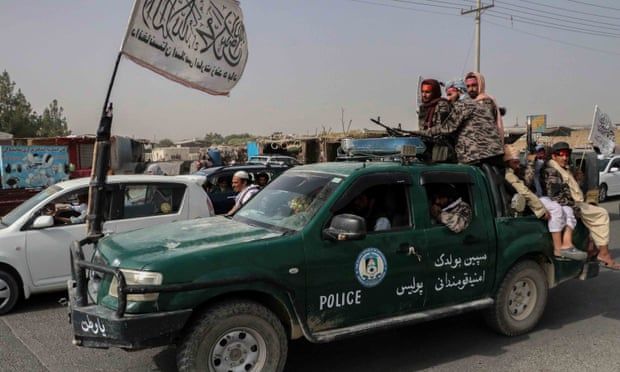 Keir Starmer leads criticism of US president’s approach, calling it a ‘catastrophic error of judgment’

Joe Biden has come under fire from senior British politicians over his defence for withdrawing forces from Afghanistan, with Keir Starmer calling it a “catastrophic error of judgment”.

A defiant US president insisted on Monday that he stood squarely behind the decision to quickly pull out troops, despite the swift offensive by the Taliban. He said: “After 20 years, I’ve learned the hard way that there was never a good time to withdraw US forces. That’s why we’re still there. We were clear-eyed about the risk.”

Biden’s claim that the US and its allies gave Afghans “every chance to determine their own future” but ultimately “could not provide them with the will to fight for that future” drew criticism from senior Tory MPs, Labour and the Liberal Democrats.

Pressure mounted on the prime minister, Boris Johnson, to disavow the comments, before a statement he will make on Wednesday when parliament is recalled.

Starmer said he was deeply concerned Biden’s address did not “recognise the wider consequences of the action that he’s taken” that would result in a “looming humanitarian crisis”.

After receiving a briefing from the government’s national security adviser, the Labour leader said the White House was wrong to blame the Afghan government and security forces for the outgoing regime’s collapse, adding there was a big question the US and UK needed to answer about why the resilience of the Taliban was so underestimated.

The Liberal Democrat leader, Ed Davey, said Biden and Johnson had been left “frozen by events and negligent, unprepared”.

Davey told the Guardian that the paralysis in Washington meant the UK should turn its attention to building a coalition in Europe prepared to take tougher action. He urged Johnson to convene a security summit with allies on the continent “to respond to this crisis” and stop Afghanistan becoming a “breeding ground” for the training of terrorists who carry out attacks in the west.

Senior Conservatives also rounded on Biden. Gavin Barwell, former chief of staff to Theresa May, said it was “time to wake up and smell the coffee” that Democrats and Republicans no longer believe “the US should be the world’s policeman”.

He added: “The lesson for Europeans is clear. Whoever is president, the US is unlikely to offer the same support that it used to in parts of the world where its vital interests are not involved. Europeans are going to have to develop the capability to intervene without US support. That’s not going to be cheap. And the EU and Britain are going to have to work out how to cooperate on this because we face the same threats.”

'I stand squarely behind my decision': defiant Biden defends withdrawal from Afghanistan

Several MPs said constituents, particularly former service personnel, had been in contact, with “heart-rending” stories of friends and former colleagues in Afghanistan who were now in immediate danger, piling pressure on the government to act faster to help save them.

Tom Tugendhat, who chairs the foreign affairs select committee, said he was “extremely angry” at Biden’s criticism of Afghan soldiers, calling those troops “incredibly brave” and saying the US withdrew “like a thief in the night” with no proper handover.

The former Treasury minister Huw Merriman, who chairs the transport select committee, called Biden a “total blithering idiot” for blaming Afghan forces. “Makes me wonder if he is the Siamese twin of Donald Trump. Tony Blair left us with this mess and we did not try hard enough to clear it up,” he tweeted.

Another former minister, Simon Clarke, said it was the end of an American era. “The more you reflect, the more you realise the speech [Biden] gave last night was grotesque. An utter repudiation of the America so many of us have admired so deeply all our lives – the champion of liberty and democracy and the guardian of what’s right in the world,” he said.

Raab: pace of Taliban takeover 'caught everyone by surprise'

Raab made no direct criticism of Biden on Tuesday, only saying that the UK could not have stayed in Afghanistan unilaterally.

“The critique is perfectly reasonable that we didn’t see this coming,” he told BBC Radio 4. “But unless someone’s going to explain how many extra UK troops we should put in, in the absence of the US commitment, I think the right thing for us to focus on is the evacuation effort, and how we now use every lever that we’ve got at our disposal with all due realism, to try and moderate the influence and the impact of the regime that comes next.”

Biden is due to give his first interview since the Taliban takeover to ABC on Wednesday, in the face of support in the US for withdrawal plummeting from 69% in April to 49% now, according to a Morning Consult/Politico poll.

Leon Panetta, who was Barack Obama’s secretary of defence and CIA director, told CNN: “I think of John Kennedy and the Bay of Pigs. It unfolded quickly and the president thought that everything would be fine. And that was not the case.”

Rightwingers were just as scathing. John Bolton, national security adviser to Trump and ambassador to the UN for George W Bush, said: “Biden’s confession that he sees the unfolding chaos in Afghanistan as validating our retreat is outrageous.”

Mitch McConnell, the most senior Republican in Congress, said: “I think Afghanistan is lost. Every terrorist around the world is cheering in Syria, in Yemen, in Africa. They’ve watched the Taliban … defeat America in effect.”