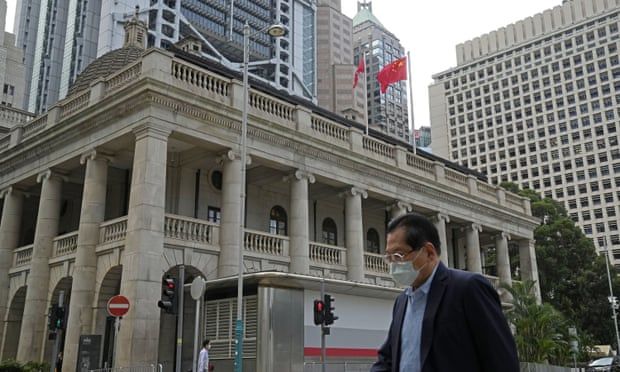 Lord Reed, the president of the UK supreme court, the country’s highest court, said he and his colleague Lord Hodge had submitted their resignations as judges of the Hong Kong court of final appeal (HKCFA) with immediate effect.

In a statement, published on Wednesday, Reed said: “The courts in Hong Kong continue to be internationally respected for their commitment to the rule of law. Nevertheless, I have concluded, in agreement with the government, that the judges of the supreme court cannot continue to sit in Hong Kong without appearing to endorse an administration which has departed from values of political freedom, and freedom of expression, to which the justices of the supreme court are deeply committed.”

Judges of the supreme court and its predecessor, the appellate committee of the House of Lords, have sat on the HKCFA since 1997 when the UK returned the territory to China. In recent years, Beijing has increasingly interfered in the Hong Kong administration, with a crackdown on dissidents in the city state leading to thousands of arrests, an oppressive national security law imposed by China in 2020 and opposition politicians being barred from standing in elections.

Reed’s decision marks a change of heart since August last year when he said that he and Hodge would remain engaged with the HKFCA with the support of the foreign secretary and the lord chancellor. That stance attracted criticism from some who believed it was lending credibility to an anti-democratic regime.

The UK’s consul general in Hong Kong, Brian Davidson, said the government could no longer “endorse serving judges on the court of final appeal here”.

“We support the people of Hong Kong and the principles of freedom and democracy, as promised in the joint declaration,” he said.

Benedict Rogers, the chief executive of the UK-based Hong Kong Watch, said the decision “reflects the sad reality that the national security law has torn apart the human rights and constitutional safeguards which made Hong Kong meaningfully autonomous”.

“The British judges’ ongoing presence was providing a veneer of legitimacy for a fundamentally compromised system, and the British government is right to have taken steps to recall them. The two judges who have resigned have done the right thing and we hope all remaining foreign judges will follow suit.”

Chung Ching Kwong, the Hong Kong campaign’s director for the Inter-Parliamentary Alliance on China, said the decision came as a surprise, given expectations of a Westminster Hall debate on Wednesday morning.

Kwong told the Guardian the campaigners had been seeking to have the British judges removed from the court of final appeal as their presence was “no longer acting as a moderating force, as the government has claimed, but was giving a false sense of legitimacy to the Hong Kong government”.

Kwong said the non-permanent judges had no impact over political cases, and so there was no positive influence they could wield by remaining.

“They are only in the court of final appeal, and when it comes to national security law cases the Hong Kong government gets to handpick which judges can sit on the panel. None of the British judges have ever been chosen.”

Tom Tugendhat MP, the co-chair of the China Research Group, set up by Conservative MPs in the UK, said: “Beijing’s repressive control of Hong Kong has eroded liberty in the city and turned law from a defence against tyranny to the tool of the tyrant.

“It’s sadly right that the UK shifts its stance in response to the changing situation on the ground. British judges should not provide a veneer of legitimacy to a legal system that is now being used to lock up Hongkongers without due process”

The decision will shift the spotlight on to the foreign judges remaining in Hong Kong, including a former justice of Australia’s high court, Robert French.

In September 2020, another Australian judge, James Spigelman, resigned from the HKCFA two years before the expiration of his appointment, citing reasons “related to the content of the national security laws”.

The Hong Kong government claimed it had “revoked” Spigelman’s appointment but did not provide details. Revocation of a judge can only be performed by a chief executive on the recommendation of a tribunal comprising at least three local judges, for “an inability to discharge his or her duties” or for “misbehaviour”, and it must be endorsed by the legislative council.
Add Comment