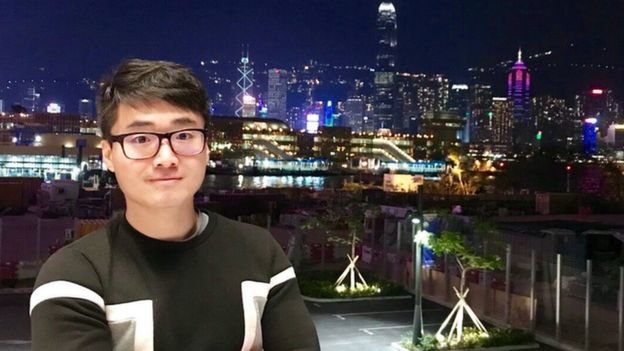 A former British consulate staff member in Hong Kong, Simon Cheng, says he's been given political asylum by the British government. He said he can stay in the UK for five years and apply for citizenship after that.

Simon Cheng, a Hong Kong citizen, was detained on a business trip to mainland China for 15 days last August.

He denied the charges, telling the BBC he had been beaten and forced to sign false confessions while in custody.

UK government sources said at the time they believed his claims were credible.

Mr Cheng, a supporter of the pro-democracy movement, says he believes it is too dangerous for him to return to Hong Kong, fearing he may be arrested and taken to mainland China once more.

In June, Foreign Secretary Dominic Raab said China had still not provided "an adequate response" to the UK's questions over the incident.

Mr Cheng was granted asylum on 26 June. In a press conference on Wednesday, he said he believed he was the first Hong Kong holder of the British National (Overseas) passport, known as a BNO, to receive political asylum.

"I am grateful for the determination and courage shown by the UK government to rescue British nationals," he wrote on Facebook. "I also hope my case can be a precedent for other HongKongers to seek for protection.

"Leaving means not an end but a beginning. We will continue the fight against the expanding totalitarianism, and be back to our hometown with true democracy and freedom."

The UK government confirmed on Wednesday that up to three million Hong Kong residents would be offered the chance to settle in the UK and ultimately apply for citizenship in the wake of Beijing imposing a controversial new national security law.

Critics say the law, brought in on Tuesday, will erode the added freedoms granted to the region under the "one country, two systems" policy agreed after the UK handed Hong Kong back to China in 1997.

Mr Cheng was working for the UK embassy in Hong Kong, charged with generating interest in investing in Scotland among the Chinese business community.

But as the 2019 protests began to grow, he also volunteered to collect information on the status of the protests for the consulate - for the purposes of observation.

He went missing on 8 August after being detained at the border on the way back from the Chinese city of Shenzhen.

Mr Cheng says he was held for 15 days during which time he was "shackled, blindfolded and hooded", held in stress positions and beaten if he moved.

The questioning focused on his role in the protests. He also said he saw other Hong Kong protesters during his time in custody.

Later, after he had been released, China's state-run broadcaster ran a video showing Mr Cheng confessing to soliciting prostitutes. Mr Cheng says he was forced into making the confession.