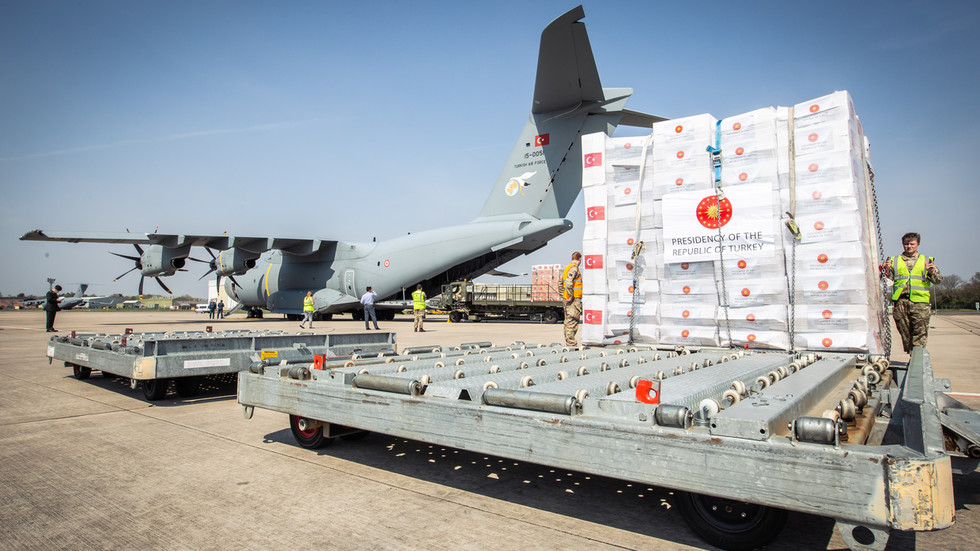 London only made a request to Turkey over the shipment of 84 tonnes of vital protective wear to be used in the fight against the coronavirus on Sunday – despite earlier claiming that was the day it would arrive, Sky News reports.

The consignment has so far failed to materialize, with two Turkish sources allegedly telling Sky that authorities in Turkey – which were not supplying the shipment, but whose help was sought – didn’t receive an official request from the UK until Sunday.

The mystery surrounding the arrival of personal protective equipment (PPE) for frontline health and social care workers continued over the course of the weekend, with Education Secretary Gavin Williamson saying during Sunday’s briefing that he “hoped” the delivery would turn up on Monday.

Monday came and went without any sign of the PPE delivery – and still no word from Prime Minister Boris Johnson’s administration over the exact timing of the shipment, which is only adding to the growing public anger at the handling of the coronavirus crisis. Critics have hit out at reports of shortages of gowns and other protective gear worn by medical and care home workers.

Social media has been awash with people lambasting the government for not being upfront with the British public. Some accused ministers of “blatant” “lies” and being “incompetent chancers.”

One person tweeted: “This government has reached unimaginable depths over lying to us, but this is unbelievable.” Others jokingly suggested that ministers were acting like mischievous schoolchildren trying to explain why they hadn’t done their homework.

Britain only made a formal request to Turkey over a consignment of personal protective equipment on Sunday 19 April - the day after a cabinet minister announced the "very significant additional shipment" was already heading to the UK https://t.co/QPxT3tDyRi

Meanwhile, sources within UK suppliers of PPE have told The Telegraph that their warehouses are full of millions of pounds worth of the equipment, brought in from China - and which are still being shipped out overseas. The British firms claim they have offered to help plug the gaps in supplies needed for use within the UK, but have been ignored by Johnson’s administration.

UK Health Secretary Matt Hancock came under fire on Friday after sarcastically insisting he didn’t have a “magic wand” to make the vital gear “fall from the sky.” Hancock also claimed that changing advice to allow the reuse of PPE was a “clinical decision,” and blamed the shortfall in coronavirus protective kit on global shortages, rather than any failing by him or his department.