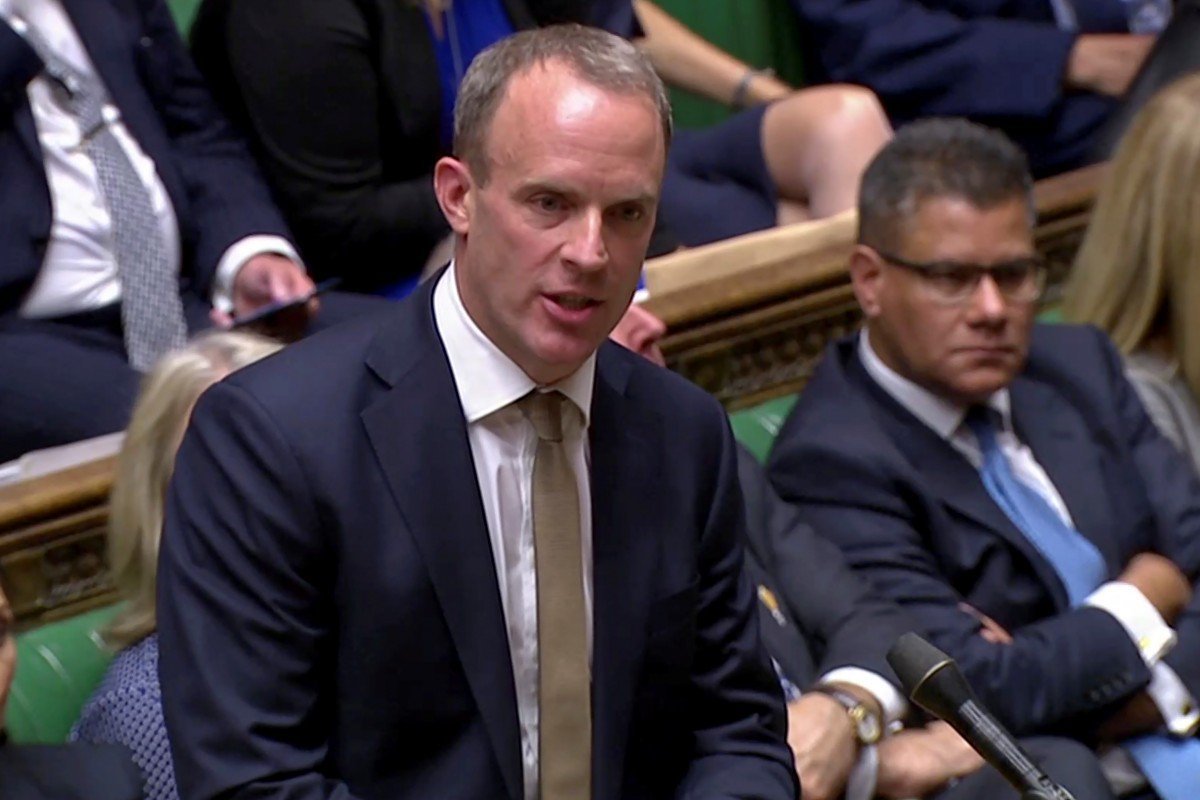 UK Foreign Secretary Dominic Raab on Thursday called on China to “live up to its obligations” to Hong Kong under the Sino-British Joint Declaration, reasserting Britain’s commitment to the continuing legality of the handover treaty.

In response to a grilling from members of all parties in the House of Commons, Raab also warned Beijing against military intervention in Hong Kong and expressed concern over alleged human rights abuses in Xinjiang. The Chinese embassy in London hit back the same day expressing “grave concern” over his “irresponsible remarks”.

The 1984 joint declaration “remains as valid today as it was when it was signed almost 35 years ago”, Raab said. “It is a legally binding international treaty. And we expect China to live up to its obligations under that treaty.”

The foreign secretary called on parliament to join him in condemning the recent violence in Hong Kong “from a minority of those engaged in those protests”.

“It is essential that protests are conducted peacefully and within the law and that the response of the authorities is proportionate.”

However, he also said “it is becoming increasingly clear that there are criminal gangs involved, and it is not clear entirely what their links may or may not be with the various administrations”.

“Frankly, wherever those incursions or erosions or impingements come, we will call them out,” he said.

Raab said “the joint declaration, as a bilateral treaty, reflects not just the right to peaceful protest but the basic international human rights obligations, which would apply to China in any event”.

“We express grave concern and firm opposition to the British government official once again making irresponsible remarks on Hong Kong,” the Chinese embassy said in a statement. “We have made our solemn position on Hong Kong clear to the UK on many occasions.”

Citing the success of the “one country, two systems” principle by which China governs Hong Kong, the embassy said “the colonial era is long gone and Hong Kong is now a Special Administrative Region of the People’s Republic of China”.

“The UK has no sovereignty, no right to govern or supervise over Hong Kong. Hong Kong affairs are purely internal affairs of China. We would never allow any external force to use any excuse to interfere in Hong Kong affairs,” the statement continued.

The embassy asked Britain to “immediately stop interfering in Hong Kong affairs and other internal affairs of China, and do more to help maintain the prosperity and stability in Hong Kong and enhance mutual trust between China and the UK, instead of doing the opposite”.

Senior Chinese officials, including Chinese Ambassador to London Liu Xiaoming, had accused Raab's predecessor Jeremy Hunt of having a colonial attitude to Hong Kong, warning Britain to stay out of Chinese affairs and promising “consequences” if it did not.

Last month, China criticised a call Raab made to Hong Kong Chief Executive Carrie Lam as a “mistake”, describing it as a move “to put pressure on her” and calling on Britain to “stop intervening in China's affairs”.

During the House of Commons debate on Thursday, Raab stopped short of granting right of abode to holders of BN(O) passports, which around 3.4 million Hongkongers were eligible to apply for before the 1997 handover.

“There is no right of permanent residence under the BN(O) passport, but it is part of the overarching model of one country [two systems], which at least at this point, we are arguing needs to be respected, but it needs to be respected by all sides including China,” Raab said.

He added that his government would “make sure that, in terms of their rights and entitlements they are entitled to expect within that status, they have our full support”.

Conservative MP Bob Seeley said British government should look at BN(O) status alternatives in the light of growing tensions, including “a fast track to residency” for 250 former servicemen in Hong Kong.

Raab said China “for the large part is trying to respect – or seeking to respect, or at least talking about respecting – the degree to which it is reflected in the joint declaration”, and that it would not at this moment be right “to unpick one element of that package”.

“We in this house and across the international community must be clear with our Chinese friends and partners about the Rubicon that would be crossed if we saw a major intervention in Hong Kong. No one wants to see any repeat of the tragic circumstances in Tiananmen Square
all those years ago.”

Raab was speaking a day after parliament was recalled following a ruling by the country’s highest court against Prime Minister Boris Johnson , who had ordered a five-week suspension.

“Amidst all the Brexit divisions we have, it is important that we have some cross-party consensus where it is practicable on this issue, because that allows us to send the clearest signal to our international partners, and indeed to Hong Kong and China on its importance, so I welcome that,” he said.

Raab was due to meet his Chinese counterpart Foreign Minister Wang Yi in New York this week but had to cancel after a the UK Supreme Court ordered parliament to be reconvened.

In response to a question from Liberal Democrat MP Chuka Umunna regarding the involvement of British police in Hong Kong, Raab said the officers were there “to provide police training” and this was “precisely to make sure that policing is done in a proportionate way, and with some restraint where that is called for”.

Raab also said the government was concerned about “credible” reports of one million people interned in camps in Xinjiang.