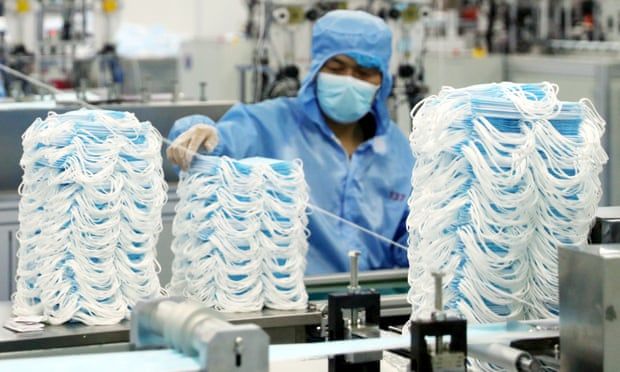 Ministers are looking “sympathetically” at plans to stop the government buying health goods made in China’s Xinjiang province when the health and social care bill returns to the Commons later this month. The move would be a first sign that the government is willing to toughen its approach to authoritarian regimes in the wake of the invasion of Ukraine.

In an interview at the weekend, the prime minister, Boris Johnson, said the west still needed to apply pressure on the Chinese government not to support the Russian invasion of Ukraine.

A backbench amendment already passed in the Lords and sponsored by the former Conservative chief whip, Lord Blencathra, is gaining support across the political spectrum in the Conservative party, including some One Nation MPs, as well as traditional Tory opponents of the Chinese regime.

The amendment to the health and social care bill passed with cross-party support, but little fanfare, in the Lords earlier this month. It will be debated when the bill returns to the Commons, most likely in the week beginning 28 March.

It would ban NHS procurement from regions where the government believes there to be a “serious risk of genocide”. Ministers have already tried to buy off the rebels by proposing a review of health supply chains, but now may go further and promise not to procure goods from Xinjiang on grounds of risk of forced labour.

The Foreign Office has resisted any proposal that requires anyone save the international courts to decide unequivocally if genocide is taking place, including in Xinjiang. It has fiercely opposed the UK domestic courts, or ministers, being given that role.

Sajid Javid, the health secretary, is said to be keen to clean up health supply chains, but may come under pressure from the Foreign Office not to do anything that disturbs relations with China at a sensitive time.

Yet pressures are also building for a tougher approach. At the weekend, in an interview with the Times, the foreign secretary, Liz Truss, said the west had in the past focused too much on cheap goods at the expense of freedom and security.

It is known that the government has bought hundreds of millions of pounds of medical equipment sourced in whole or part from China’s Xinjiang Uyghur Autonomous Region, despite widespread reports of forced labour there – facts that are not denied by the government.

Conservative MP Nusrat Ghani said: “I hope the government will take ownership of this important initiative. It is awful to think that PPE we have been wearing through this pandemic may have been made by Uyghur forced labour. We have a duty to protect the NHS from involvement in the heinous things done to Uyghur people. This amendment is a proportionate and reasonable way of keeping the UK away from it.”

Blencathra’s amendment was phrased so as not to require the UK to announce that there is genocide in Xinjiang, but that may not satisfy Foreign Office policy objections.

The UK government is already bound to assess its suppliers for a risk of slavery, and this extra duty would mandate that an assessment of a “serious risk” of genocide is performed by the government and taken into account during public procurement.

The amendment has the support of the British Medical Association, a strong advocate of public procurement as a means of protecting ethical standards.