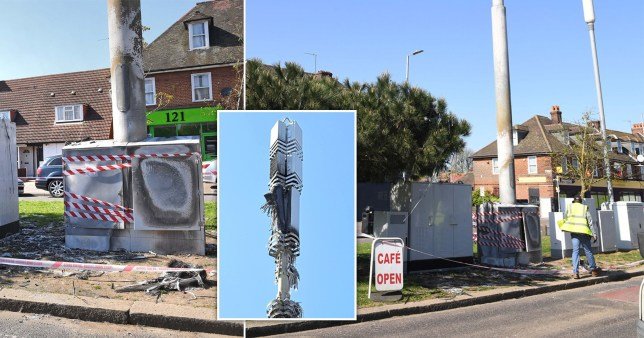 Networks reported a further 20 cases of suspected arson over the weekend in England, Wales and Scotland. Among the damaged masts was one providing connectivity to the Nightingale Hospital in Birmingham set up to provide urgent treatment to Covid-19 patients. Two 19-year-old men and an 18-year-old man were arrested on suspicion of arson for a suspected attack on a mast in Dagenham, east London.

Meanwhile, West Yorkshire Police are working with the fire service to determine the nature of mast fire in Huddersfield. Vodafone chief executive Nick Jeffery said it was ‘deeply disappointing’ to learn that arsonists are still attacking the towers.

He said: ‘Burning down masts means damaging important national infrastructure. In practice, this means families not being able to say a final goodbye to their loved ones; hard-working doctors, nurses, and police officers not being able to phone their kids, partners or parents for a comforting chat.’

As the Metropolitan Police were called to a mast fire in Dagenham at 1.34am this morning, some evacuations of residential properties were carried out as a precaution. Four fire engines and around 25 firefighters attended the incident, which is the latest in a spate of suspected arson attacks.

West Yorkshire Fire and Rescue said a fire in Huddersfield early this morning destroyed communication equipment belonging to three network providers, one of which is used by the emergency services.

The cause of both incidents is not yet known, but network provider EE said they are not 5G masts.

The rate of attacks was still smaller than the weekend before though no assaults on members of staff had been reported over the holiday.

Holmes said: ‘I totally agree with everything you are saying but what I don’t accept is mainstream media immediately slapping that down as not true when they don’t know it’s not true.

‘What I don’t accept is mainstream media immediately slapping that down as not true when they don’t know it’s not true. ‘No one should attack or damage anything but it’s easy to say it’s not true because it suits the state narrative.’

Ofcom said it will assess comments made by Holmes, 60, as a ‘priority’, after the watchdog received more than 400 complaints. Attempting to ‘clarify’ his comments, Holmes said: ‘Every theory relating to such a connection has been proven to be false and we would like to emphasise that.