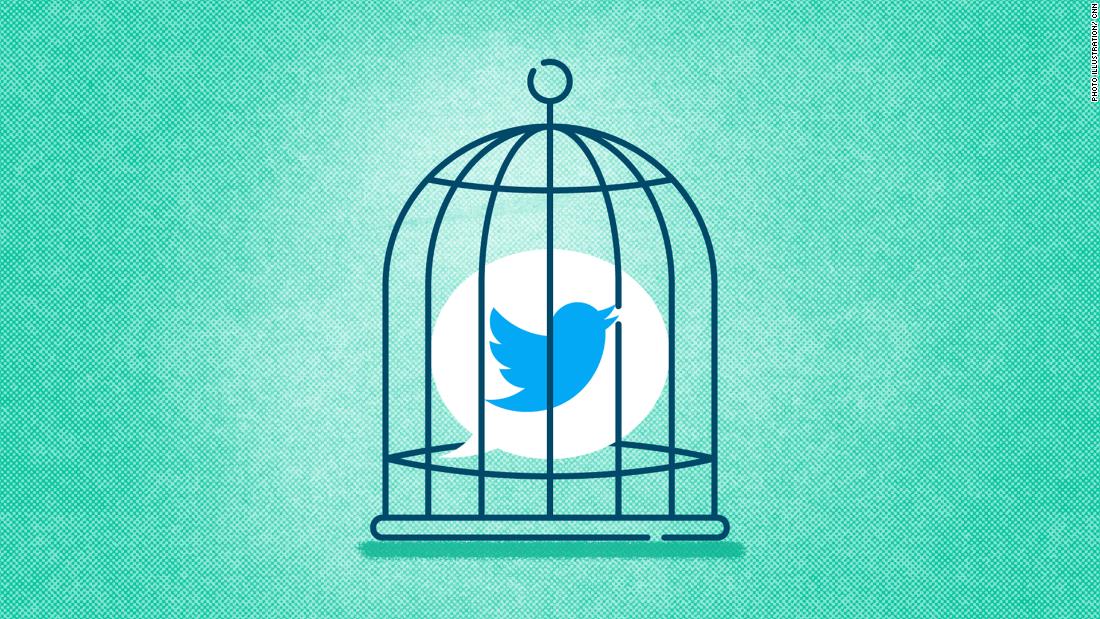 India's efforts to crack down on dissent have left Twitter with an impossible balancing act: protecting free speech, or risking its employees and business in one of the company's most vital markets.

The company said in a blog post Wednesday that it was "served with several separate blocking orders" by the Indian government against hundreds of Twitter accounts in the past 10 days.

Early last week, it briefly suspended many of those accounts at the government's behest but reinstated them a few hours later after a public outcry, including one handle with over 200,000 followers supporting the ongoing protests by farmers against new agricultural reforms and another belonging to one of the country's most prominent magazines.

Twitter said it restored the accounts "in a manner that we believe was consistent with Indian law," but was hit with a non-compliance notice by India's Ministry of Electronics and Information Technology. The notice threatened Twitter's employees with up to seven years in jail, according to a report from BuzzFeed News.

In a statement Wednesday night local time, the Indian government said it had asked Twitter to remove tweets and accounts using hashtags that contained the phrase "farmer genocide," as well as accounts it said were supported by separatist sympathizers and backed by India's neighbor and rival Pakistan.

"In India, we value freedom and we value criticism because it is part of our democracy," the government said. "But freedom of expression is not absolute and it is subject to reasonable restrictions."

The government added that Twitter "is welcome to do business in India" but must respect local laws, and criticized "the manner in which Twitter has unwillingly, grudgingly and with great delay complied with the substantial parts of the order."

The social media company said it had taken some action against more than 500 accounts that were flagged by the government's orders. Twitter said they were in "clear violation of its rules." It also made several other accounts only visible outside India and restricted the visibility of certain hashtags containing harmful content.

But Twitter also drew a line in the sand.

"Because we do not believe that the actions we have been directed to take are consistent with Indian law, and, in keeping with our principles of defending protected speech and freedom of expression, we have not taken any action on accounts that consist of news media entities, journalists, activists, and politicians," the company said. "We will continue to maintain dialogue with the Indian government and respectfully engage with them."

Who will blink first?

With more than 700 million internet users, India is a huge and important market for global tech companies, albeit an increasingly precarious one as the government led by Prime Minister Narendra Modi seeks to tighten its grip on the internet and social media.

The Modi government has previously clashed with platforms such as Facebook and WhatsApp and has proposed regulations that would expand its ability to police content online. It also banned TikTok and dozens of other apps last year after diplomatic tensions with China escalated, and it has resorted to shutting down the internet altogether in several parts of the country to curb protests.

Now Twitter is the latest company to find itself in the government's crosshairs. The platform has become a key conduit for the public — and increasingly international — debate between proponents and critics of the Indian government's farm laws.

"The shrinking space for civil society is being mirrored by censorship and anti-democratic regulatory moves to censor users from their rights to free speech," said Thenmozhi Soundararajan, executive director at advocacy group Equality Labs. "It is time for the world to understand how much is at risk right now and for American companies like Twitter and Facebook to act before it's too late."

Twitter, for now, appears to be standing its ground against the Indian government.

"We will continue to advocate for the right of free expression on behalf of the people we serve. We are exploring options under Indian law — both for Twitter and for the accounts that have been impacted," the company said Wednesday. "We remain committed to safeguarding the health of the conversation occurring on Twitter, and strongly believe that the tweets should flow."

But if the government chooses to make good on its threats or further escalate the situation, Twitter is left with few good options.

"There are two main risks: The first is to Twitter's employees in India, who may be at risk if the company fails to comply with demands," said Jillian York, Director of Freedom of Expression at the Electronic Frontier Foundation.

"The second risk is that Twitter continues to refuse and gets blocked in India. While this may be the right moral outcome, it's obviously not the best outcome for the Indian people, many of whom rely on social media to get out key messages about what's happening on the ground," she added. 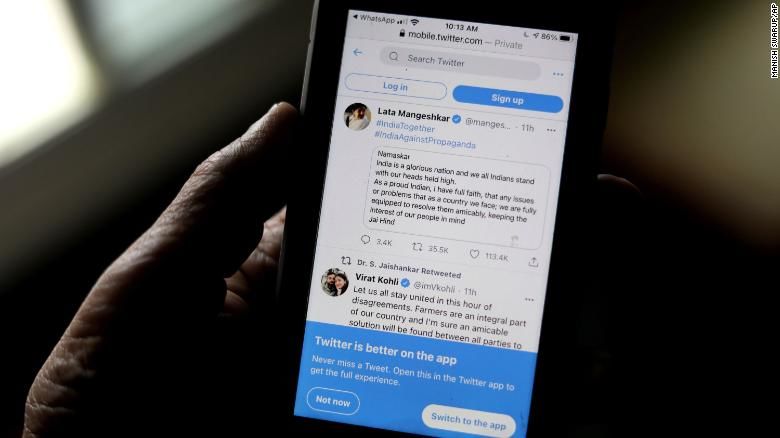 A man reads tweets by Indian celebrities, one of the many backing the Indian government, on his mobile in New Delhi, India, on Thursday.

While Twitter and the Indian government remain at an impasse with each other, both sides must also deal with external scrutiny.

Social media companies have long faced pressure to do more to combat misinformation and hate speech on their platforms. And those issues, hotly debated in the United States, often have further reaching and more sinister consequences in countries where the companies have a smaller business footprint but a far larger impact.

Twitter has been more proactive about policing its platform in recent months, taking down thousands of accounts linked to the conspiracy theory QAnon and banning one of its most prolific and controversial users — former US President Donald Trump. With that ban, Twitter showed a willingness to apply its policies to a world leader who violated them, albeit towards the end of his time in office. Its standoff in India also pits it against a powerful world leader in an important market.

"Jack has shown in the past that he can lead with his values," said Soundararajan, referring to Twitter CEO Jack Dorsey.

But India, with more than three times the population of the United States and a very different social and political context, presents one of the trickiest challenges to Twitter outside its home country. In another apparent setback, the company also confirmed this week that its public policy head for India, Mahima Kaul, will step down in April after more than five years. (Twitter does not break down user data for India, but third-party research suggests the country is one of its larger markets.)

"The fundamental problem is consistency ... are they able to do the same kind of contextual analysis that they did around QAnon posts, hydroxychloroquine posts and Trump's incitement?" said David Kaye, a law professor at the University of California, Irvine who previously served as the United Nations Special Rapporteur on the promotion and protection of the right to freedom of opinion and expression. "India is a really great example of how hard that is."

India, which bills itself as the world's largest democracy, must also calibrate its response. Even as it battles with Twitter, the Modi government is fighting a perception battle with some of Twitter's most prominent voices — the country's foreign ministry recently released a statement slamming "sensationalist social media hashtags and comments, especially when resorted to by celebrities and others," after tweets about the farmer protests by singer Rihanna and environmental activist Greta Thunberg went viral.

"I think there's still a risk for Modi in particular of appearing to be unable to handle sort of fundamental democratic principles like the right to peaceful assembly, the right to protest, the right to criticize and so forth," Kaye said. "I think it'll be interesting to see if the Biden administration and other governments, who are friendly with India but are in the democratic camp, really encourage the government to take a different approach here."