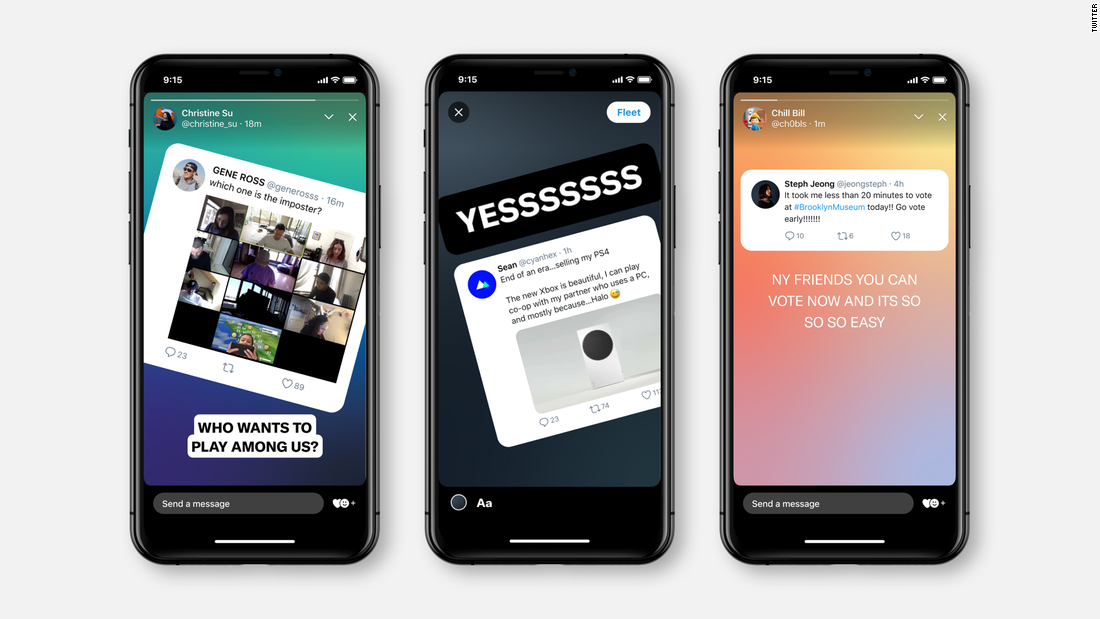 Twitter wants to be more than just 280-character blocks of text.
On Tuesday, the social network announced disappearing tweets and previewed a few more upcoming features, including audio.

Twitter (TWTR) is launching "Fleets," which are posts that disappear after 24 hours, starting Tuesday. The "Stories" format was popularized by Snapchat in 2013, and platforms including Instagram, Facebook (FB) and YouTube have since released their own versions of vanishing posts.

Unlike typical tweets, Fleets do not receive retweets, likes or public replies. Users can only react or respond to them with direct messages, much like on Instagram and Snapchat. Twitter began testing Fleets in Brazil earlier this year. Fleets will appear in a line on top of the feed.

The idea is to reduce the pressure many people feel on social media.

"Some of you tell us that Tweeting is uncomfortable because it feels so public, so permanent, and like there's so much pressure to rack up Retweets and Likes," Twitter said in a blog post. "To help people feel more comfortable, we've been working on a lower pressure way for people to talk about what's happening."

Twitter is also doubling down on audio features, including expanding its test of voice tweets, testing audio in direct messages in Brazil, and introducing a new experiment called "audio spaces," which it expects to be available before the end of the year.

"Audio spaces" is similar to another concept that has recently become popularized by Clubhouse, a buzzy but also controversial platform that is still in invitation-only mode, where users can start "rooms" with certain people leading a discussion and others listening.

Twitter was light on details, but described its feature as a live audio space where multiple people can communicate and discuss or debate a topic. The company emphasized it would like people to feel safe and comfortable in these spaces, although didn't elaborate on what controls that could result in.

Twitter said its feature will initially only be rolled out to a "very small group" of women and those from marginalized backgrounds, both of which are disproportionately impacted by abuse and harassment on the platform, the company said.

When asked about audio spaces on a call with reporters and whether it's trying to emulate what Clubhouse is doing, Twitter product lead Kayvon Beykpour pushed back.

Twitter also teased that it's looking into ways for users to be able to give "private feedback," for example telling someone they crossed a line and need to take a breather. This could take the form of a notification or a nudge from Twitter itself.

Audio and an emphasis on more private communication could bring fresh challenges for Twitter, such as how these features will be effectively moderated. The company also faced criticism for its voice tweets test not having transcription options, which made it inaccessible for people with hearing issues. The company is now working on transcriptions for all media on Twitter, which it expects to roll out next year.

"Social media is evolving and Twitter needs to catch up," Williamson said. "Fleets give Twitter a way to compete in the 'Stories' arena that Snapchat and Instagram have occupied for years. ... Twitter hasn't moved super quickly when it comes to launching new features, so I'm not surprised that Fleets has been slow to launch as well."

But while Twitter is launching a Stories copycat, other social platforms have already moved on to mimicking the next big thing: TikTok and short-form video. Instagram has launched a product called Reels, while YouTube began testing "Shorts" in India.