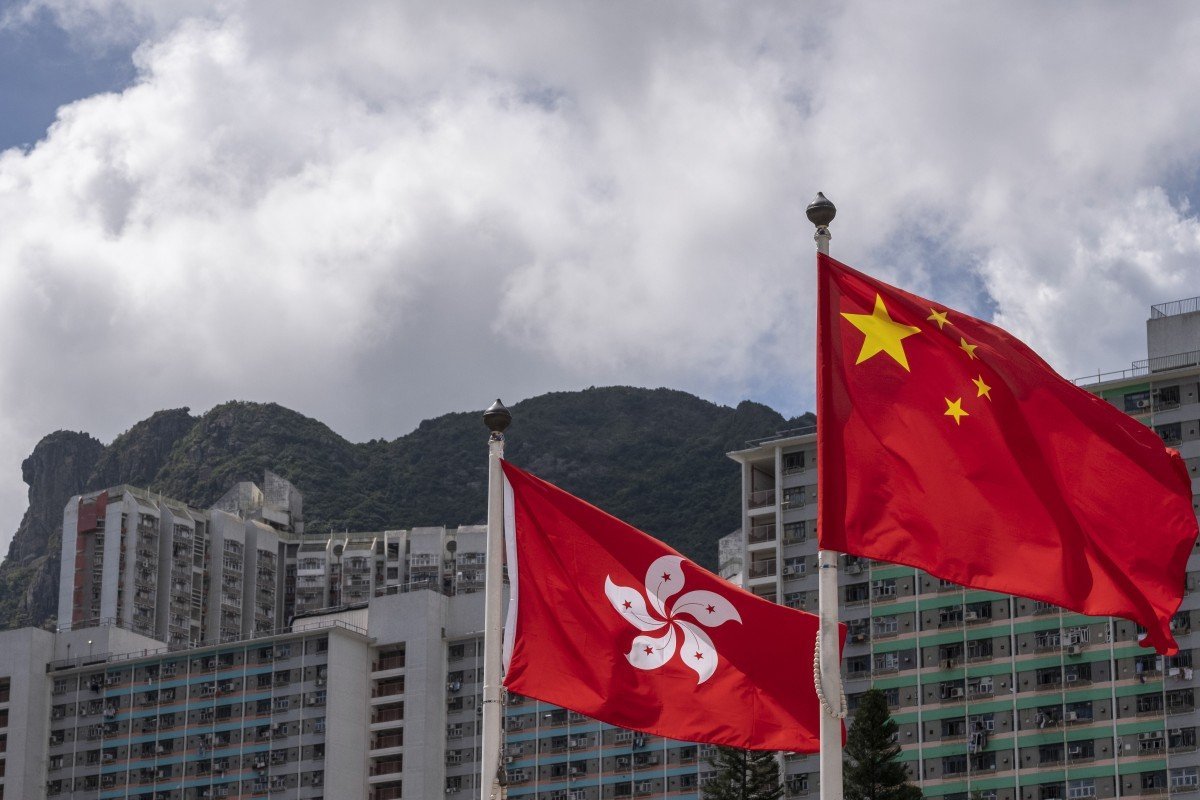 China has strengthened its national flag law to ban turning it upside down in an amendment that will also make it compulsory for government agencies in Hong Kong and Macau to fly it on working days.

The amendments to the National Flag Law will also criminalise the casual disposal of the flag.

The changes will apply in Hong Kong, where the flag law has been included as an annex to the Basic Law, the city’s mini-constitution, since 1997 when the city returned to Chinese rule.

The country’s top legislative body, the National People’s Congress Standing Committee, passed the amendments on Saturday after a second reading. The laws will be enacted next year.

No explanation has been given about what triggered the new clause that specifically criminalises turning the flag upside down. 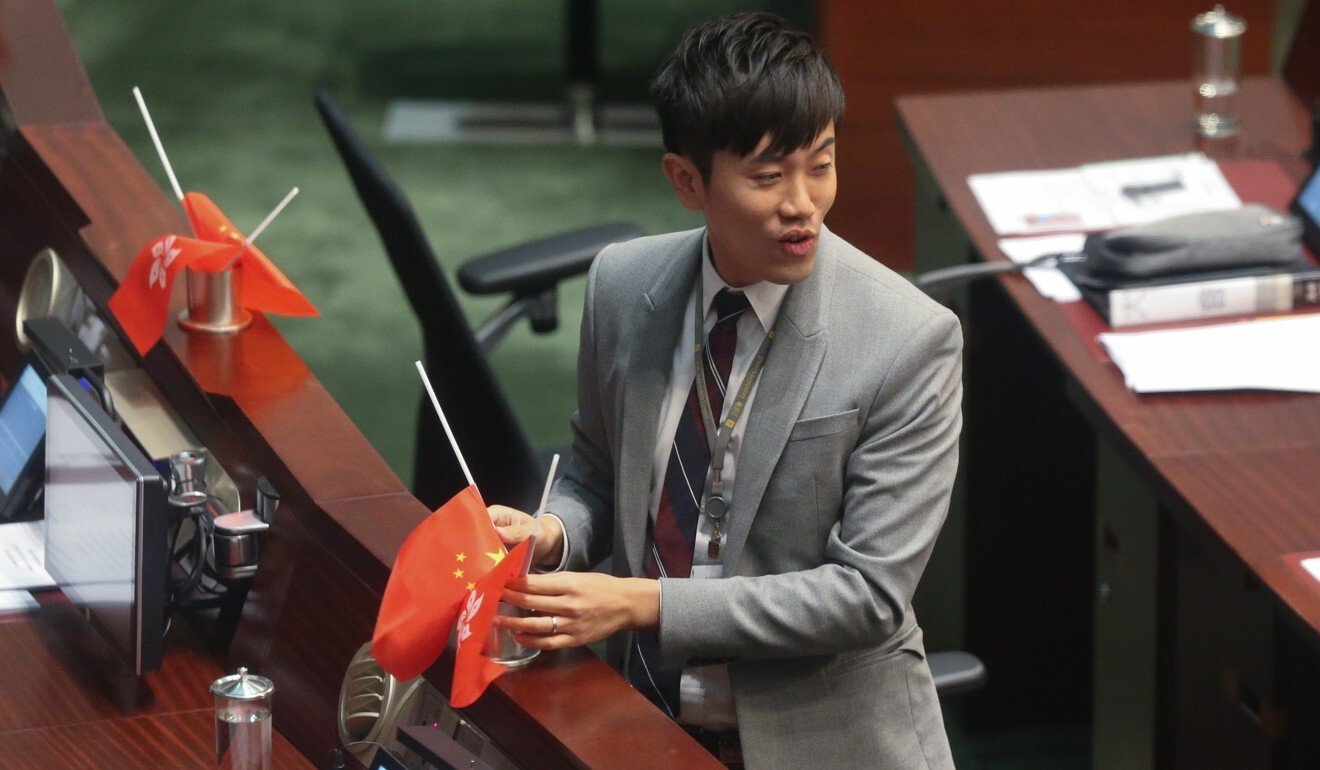 Cheng Chung-tai was fined for turning flags upside down.

However, in 2017 localist lawmaker Cheng Chung-tai was convicted of overturning miniature Chinese and Hong Kong flags during a debate in the Legislative Council the previous year and fined HK$5,000 (US$645).

Tam Yiu-chung, Hong Kong’s sole delegate on the National People’s Congress Standing Committee, said the city would be required to strengthen its existing laws against disrespecting the Chinese flag.

“The new law will take effect on January 1, Beijing will inform the Hong Kong government, and it needs to come up with a plan,” he said.

Asked if the national flag amendment needs to be handled as a matter of priority, or can be postponed until the next legislative year, Tam said: “There’s no need to wait. The amendment won’t be that complicated.”

The city government had planned to push forward 20 pieces of legislation in the next 12 months, including amendments to the ordinances on sex discrimination and air pollution.

The city’s current flag law stipulates that a person who desecrates the national flag or national emblem by publicly and wilfully burning, mutilating, scrawling on, defiling or trampling it commits an offence punishable by a fine of up to HK$50,000 and three years in jail.

During the anti-government protests last year, national flags were repeatedly desecrated or thrown into Victoria Harbour by protesters, while paintballs were thrown at the national emblem outside the central government’s liaison office in the Western District. 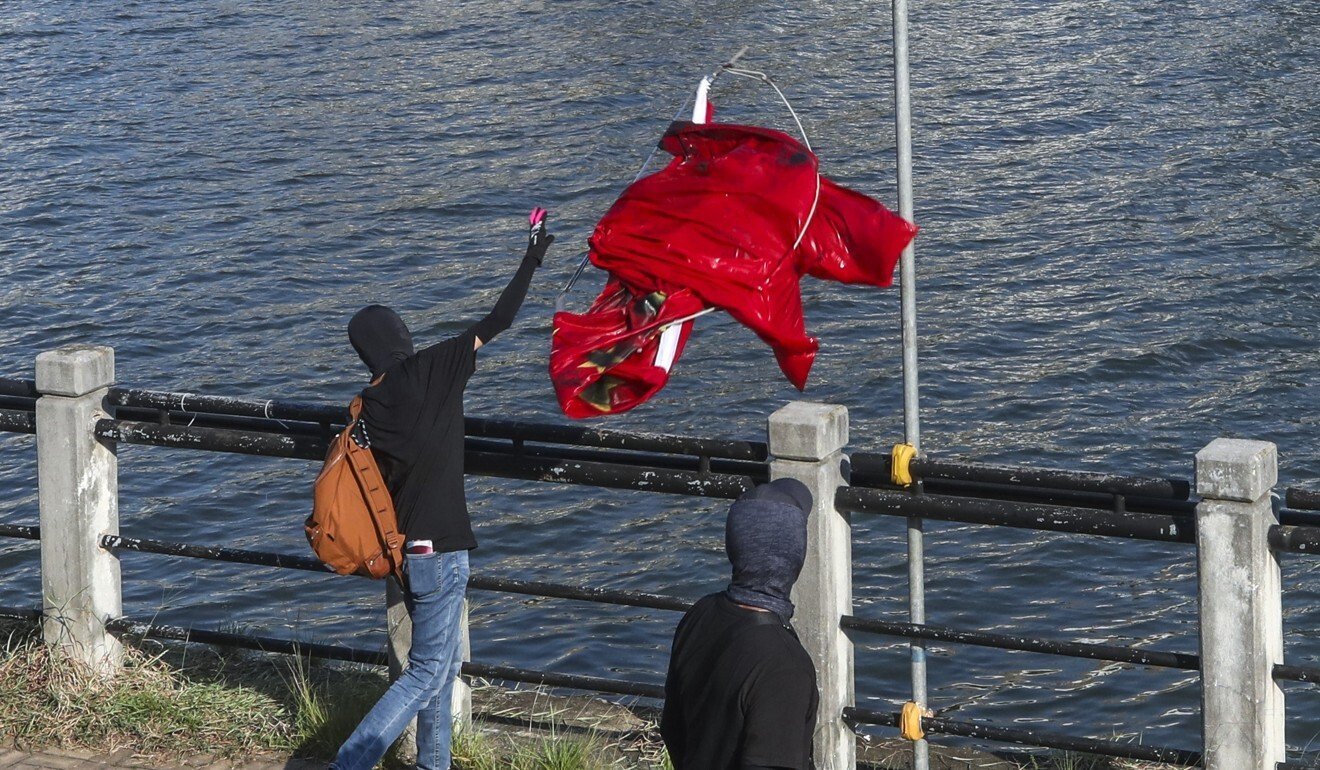 Anti-government protesters throw flags into the water in Sha Tin.

Opposition lawmaker Wu Chi-wai, chairman of the Democratic Party, said the latest measure was “obviously yet another move for Beijing to tighten its grip on Hong Kong, and crack down on the city’s freedoms”.

He said: “Beijing will not bother to trace the roots of the discontent in Hong Kong … and is just determined to use all its power on the city.”

But Tam argued the latest amendment was not just a response to Hong Kong protests.

“It also adds a clause that schools must include the national flag as an important content in patriotic education … The focus is to emphasise the importance of safeguarding the dignity of the flag.”

The Hong Kong government said in a statement that it would introduce suitable amendments to flag law “with a view to implementing provisions that are applicable and fulfilling the constitutional responsibility of the [city’s] government”.

The amendments also say all libraries, museums, galleries and other public cultural facilities must raise the flag during their open days.

Another new clause stipulates that premises in the mainland including party committees, courts, procuratorates and disciplinary commissions must fly the flag every working day – though this already happens as a matter of routine.

An amendment to the emblem law also requires government and judicial agencies at township level to display national emblems.