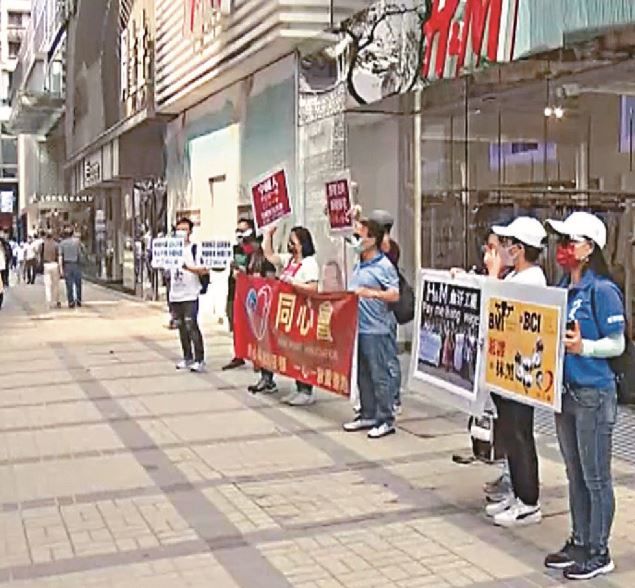 Around a dozen people protested outside an H&M store in Tsim Sha Tsui yesterday after the fashion brand said it would boycott Xinjiang cotton.
Members of the pro-Beijing group Same Heart Association chanted slogans and held placards outside the store on Canton Road, demanding the Swedish clothing retail group apologize.

"The so-called forced labor in Xinjiang and other accusations are fictitious and American and other Western politicians have hyped the Xinjiang issue," a woman said.

They also criticized H&M and the world's largest cotton sustainability program, Better Cotton Initiative, for boycotting Xinjiang cotton based on "ridiculous reports" and accused them of "colluding with anti-China forces in Western countries."

An online petition demanding H&M apologize was also started by a number of pro-establishment figures yesterday, including Democratic Alliance for the Betterment and Progress of Hong Kong lawmaker Ben Chan Han-pan.

They said the brand had made "unfounded and unreasonable" accusations on Xinjiang and called on people to stop buying and wearing its products until H&M apologizes or retracts the accusations.

The protest and petition came as H&M was attacked on Chinese social media last week regarding its announcement that it would stop using Xinjiang cotton due to concerns over alleged forced labor in the autonomous region. A number of international brands, such as Nike, Adidas and Burberry, were also hit with boycotts in the mainland over the same issue, with many Chinese celebrities cutting ties with the brands.

Separately, the United States condemned China's sanctions against two American religious-rights officials and a Canadian lawmaker in a dispute over Beijing's treatment of minorities, including Uygur Muslims.

US Secretary of State Antony Blinken has said China's moves only contribute to the growing international scrutiny of the ongoing "genocide and crimes" against humanity in Xinjiang.

Beijing's sanctions followed those imposed by the United States, European Union, Britain and Canada last week for what they say are violations of the rights of Uygur Muslims and other Turkic minorities in Xinjiang, which Beijing repeatedly denies.

China sanctioned Canadian opposition lawmaker Michael Chong of the Conservative Party, who is the vice chairman of parliament's standing committee on foreign affairs and international development and its subcommittee on international human rights. The subcommittee presented a report alleging "atrocities in Xinjiang constitute crimes against humanity and genocide" this month.

In response, Chong said he would "wear [the sanctions] as a badge of honor.''

At the same time, Beijing said it will take measures against Gayle Manchin and Tony Perkins, the chairwoman and vice chairman of the US Commission on International Religious Freedom.