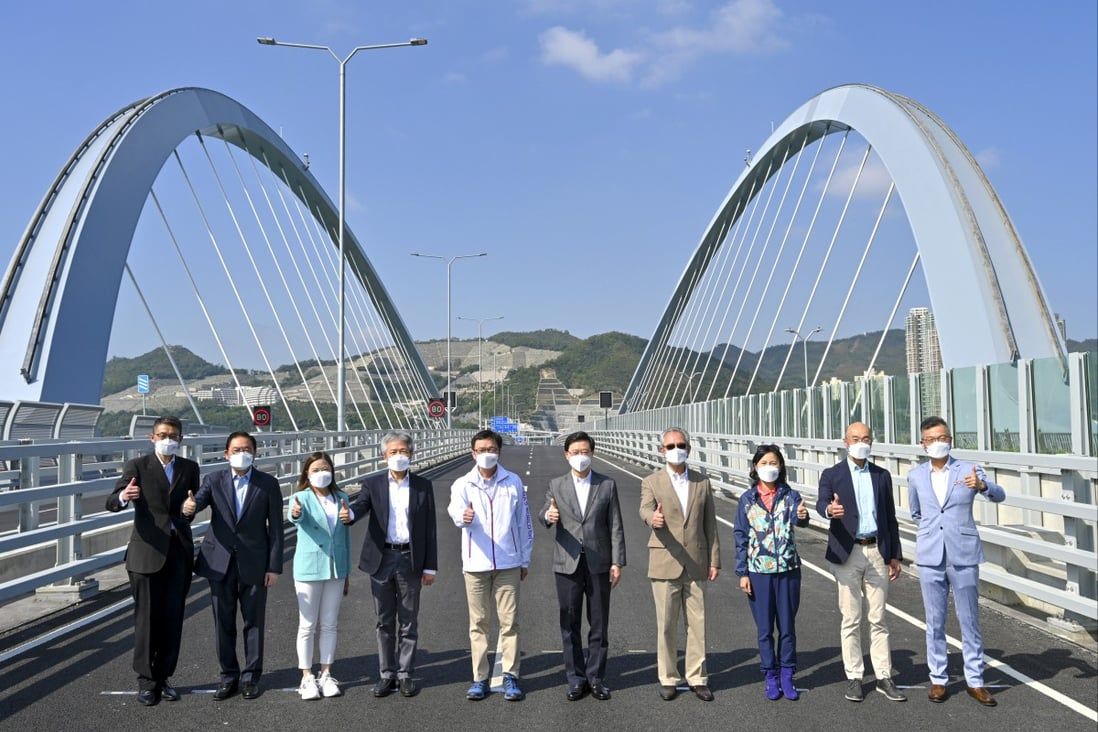 Hong Kong’s transport chief has warned that traffic in Tseung Kwan O is likely to temporarily worsen on Sunday following the opening of two long-awaited road links set to attract more vehicles to the area.

Secretary for Transport and Logistics Lam Sai-hung on Saturday said motorists needed time to become familiar with the Tseung Kwan O-Lam Tin Tunnel and the connecting Cross Bay Link, set to begin toll-free services at 8am on Sunday. The two routes are expected to relieve traffic in the long run by up to 40 per cent at the highly congested Tseung Kwan O Tunnel in eastern Hong Kong.

“Although my colleagues and I are confident that [the two road links] can improve the district’s traffic in the long run, based on past experience they will attract a lot of motorists wanting to explore the new routes there,” he wrote on his blog. 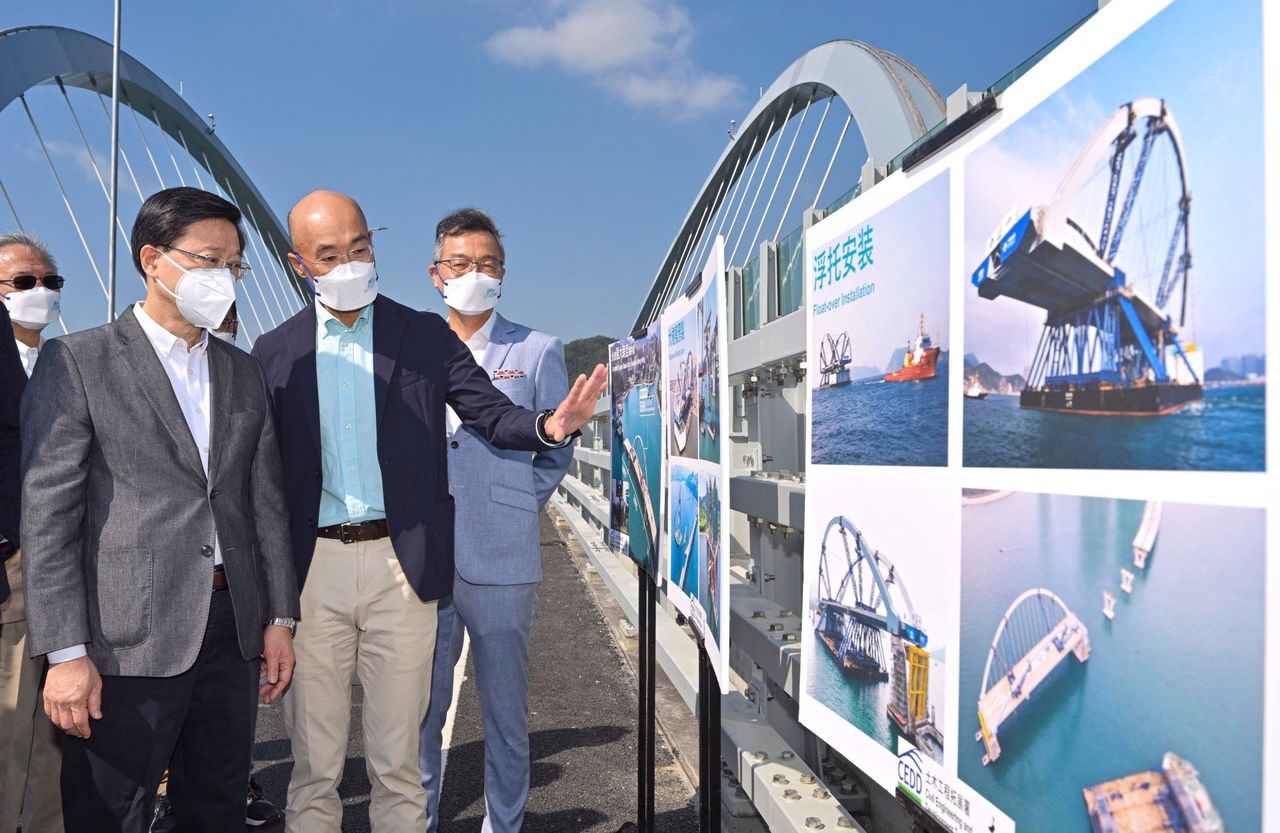 Chief Executive John Lee (left), and Director of Civil Engineering and Development Michael Fong (right) at an officiating ceremony for the two infrastructure projects.
“As motorists also need to take time to get familiar with the new routes, we expect that there will be traffic congestion in the district even though the road links open on Sunday.”

The new tunnel and its connecting bridge, which respectively cost HK$15 billion (US$1.91 billion) and HK$5.6 billion to build, link Lohas Park and the Tseung Kwan O Industrial Estate to the Eastern Harbour Tunnel and the commercial hub of Kwun Tong. The initial planned opening for the links in 2021 was delayed due to the Covid-19 pandemic.

Speaking at an officiating ceremony for the infrastructure projects on Saturday, Chief Executive John Lee Ka-chiu said the road links would shorten the commuting time between Lohas Park and Kwun Tong town centre by about 20 minutes during rush hour.

“The new road links provide convenience for residents which can save time and costs … Those living in Tseung Kwan O may have more time to spend with their families as they can now afford to go out a bit later for work and get home earlier,” he said.

The government will waive tolls for the existing Tseung Kwan O Tunnel on Sunday.

Lee also pledged to stick to an infrastructure-led approach by rolling out more transport projects and improving existing networks, saying the government would release a blueprint by the end of next year.

Lam said the Transport Department and relevant authorities had put in place emergency plans with police and traffic assistants to direct vehicles at the branch roads on the day of the opening. There will also be signage and billboards to help motorists, cyclists and pedestrians reach connecting roads and tunnels.

A department spokesman also called on motorists to pay attention to the nearby signage when travelling in Tseung Kwan O as there would be busy traffic on Sunday at the new road sections. 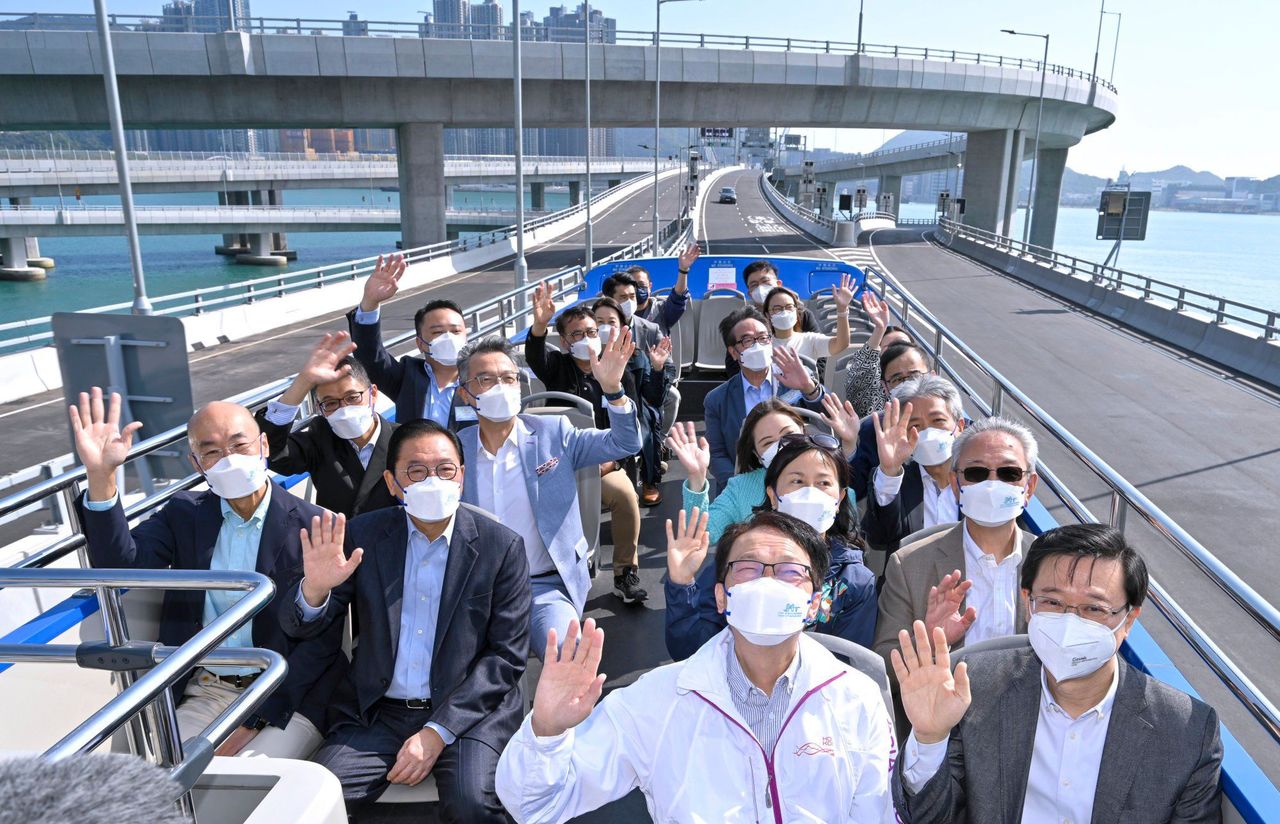 Officials attend an opening ceremony for the two infrastructure projects.

“The traffic at the new road sections and the adjacent areas will sometimes remain busy after the commissioning of the new roads,” he said. “[Motorists] should pay attention to the signage at the scene, reduce speed and be courteous when approaching the new roundabout, signalised junctions and merging points.”

The new tunnel is expected to divert 30 to 40 per cent of the traffic away from the Tseung Kwan O tunnel and provide an alternative route from east Kowloon into Tseung Kwan O.

To reach Tseung Kwan O, vehicles at the Eastern Harbour Tunnel currently have to travel through Kwun Tong and the Tseung Kwan O Tunnel, which experiences heavy congestion during peak hours.

With the road links, motorists can cut under the Chiu Keng Wan Shan hills behind Lam Tin and reach Junk Bay directly, reducing the duration of the journey to Tseung Kwan O by up to 20 minutes during morning peak hours.

The new 2.2km (1.4 miles) tunnel connects the Cross Bay Link and Po Shun Road in the east, and the Eastern Harbour Tunnel and Cha Kwo Ling Road in the west.

The bridge is the first in Hong Kong to accommodate cars, cyclists and pedestrians, connecting to a cycling track along the Tseung Kwan O waterfront to form a 5km coastal loop.