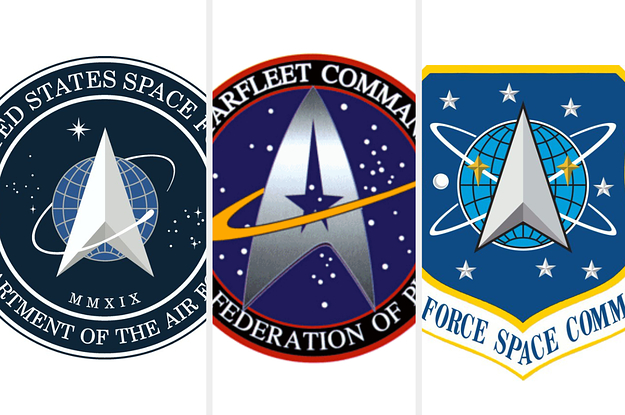 "Ahem. We are expecting some royalties from this," tweeted actor George Takei, who played Hikaru Sulu in the original TV series.

After consultation with our Great Military Leaders, designers, and others, I am pleased to present the new logo for the United States Space Force, the Sixth Branch of our Magnificent Military! pic.twitter.com/TC8pT4yHFT

The logo is almost exactly the same as the Starfleet insignia in the Star Trek franchise.

Trekkies and others on the internet pointed out the obvious similarities between the two logos, calling the symbol for the new military service for space operations a rip-off.

lol did you just rip off Star Trek?

Actor George Takei, who played Hikaru Sulu in the Star Trek: The Original Series, joked that the military should pay the franchise royalties.

Ahem. We are expecting some royalties from this... https://t.co/msYcJMlqjh

But, as it turns out, this isn't the first time the government has apparently copied the famous sci-fi show's emblem.

The logo for the Air Force Space Command, a division of the Air Force that was replaced by Trump's new Space Force last month, also looked a lot like the Starfleet logo with its signature arrowhead-shaped pennant and circular orbit design.

The Starfleet fascination among space types in the military isn't new; this was Space Command's logo, which immediately preceeded Space Force pic.twitter.com/Ap3y5gHEWD

And yet, there's more!

As others pointed out on Twitter, Star Trek's Starfleet symbol was ACTUALLY inspired by/descended from/modeled after NASA's famous meatball logo designed in 1959.

According to an article on Star Trek's website, the Starfleet emblem is "a direct descendant of the vector component of the old NASA (and later UESPA) logos."

The design also resembles a golden pin awarded to NASA astronauts in the 1960s, per the article.

So, first came the logo from NASA, then Starfleet, then Air Force Space Command, and now Space Force. Basically, nothing is new and the military and Star Trek have been copying each other for decades.