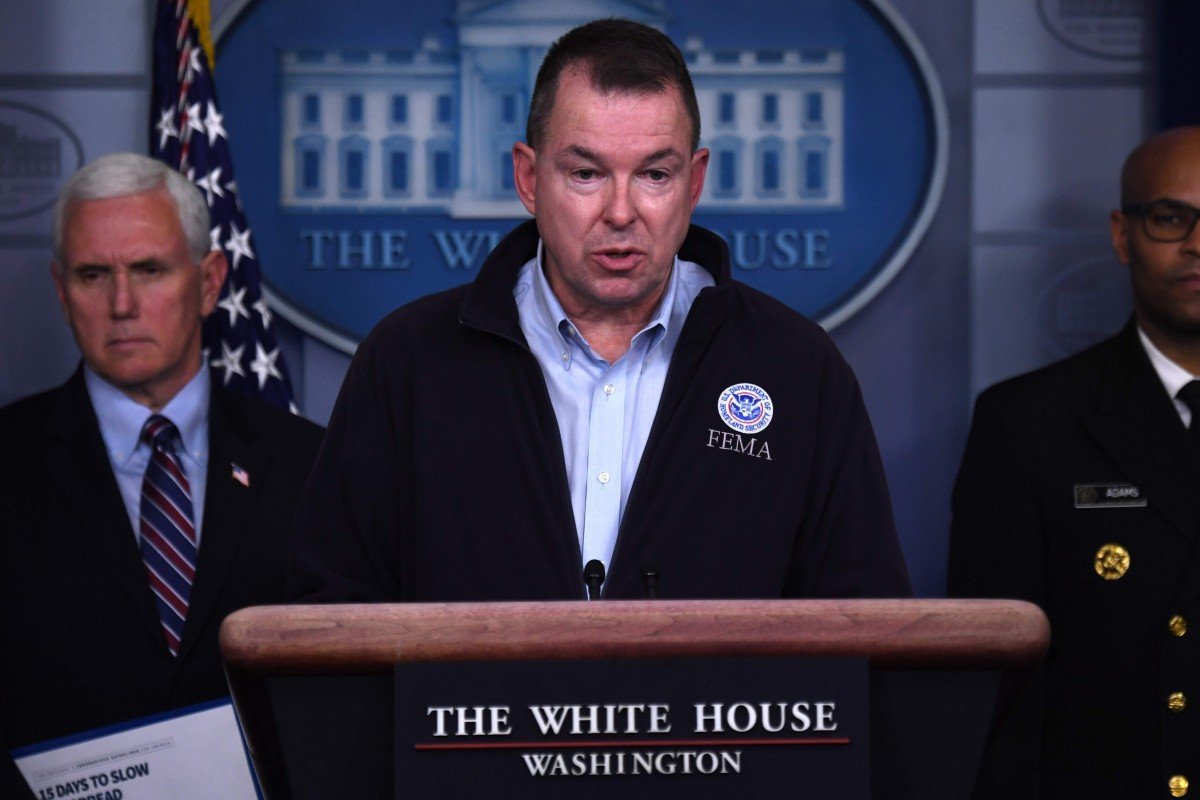 US triggers wartime provision as WHO warns country could become epicentre

‘Are we prepared? No. It’s pretty clear we’re not adequately prepared in any sense,’ says an American infectious disease expert. US cases increase by 32 per cent from the previous day’s figures, with the death toll at more than 500

The US administration plans to invoke government powers under a wartime provision to address critical shortages of medical equipment amid the coronavirus outbreak, a senior official said Tuesday. The move came as nationwide case figures soared and a World Health Organisation (WHO) warning that the United States could become the pandemic’s new epicentre.

Peter Gaynor, administrator of the Federal Emergency Management Agency (FEMA), said on CNN that the Trump administration would formally implement the Defence Production Act (DPA) to secure protective medical equipment needed to fight the spread of Covid-19, the respiratory illness caused by the coronavirus.

“Just a little while ago my team came in, and we’re actually going to use the DPA for first time today,” said Gaynor, whom Trump appointed to the post a year ago.

Gaynor said that the administration would insert “DPA language” into contracts to facilitate the federal government’s order of 500 million protective masks, and that triggering the act would also help provide about 60,000 test kits.

But hours after Gaynor’s commitment, US President Donald Trump stoked confusion over whether the administration had yet followed through with its plans to invoke the act, telling reporters in a briefing that he did not “have to use it, but the threat of it being there is great leverage”.

As of Monday, US cases numbered more than 44,000, a 32 per cent increase from the previous day’s figures, according to the Centres for Disease Control and Prevention (CDC). To date, Covid-19 has killed 544 people in the country.

State and local leaders have lashed out at the US administration over insufficient resources, with New York Governor Andrew Cuomo pleading for the federal government to release ventilators it has stockpiled. Cases in New York have topped 25,000 and continue to double every three days.

The shortage in New York was so dire that hospitals have begun experimenting with using one ventilator for two patients, said Cuomo. “It’s experimental but necessity is the mother of invention,” he said.

Speaking at a press conference on Tuesday, Cuomo berated the federal government for releasing only 400 ventilators to New York City when the state’s demand was far higher. “You want a pat on the back for sending 400 ventilators?” he said angrily. “What are we going to do with 400 ventilators when we need 30,000?”

For days, Trump had ignored pleas from lawmakers and governors – including Cuomo – to put the DPA into action, saying US industry had the capacity to meet demand for medical equipment. The federal government was not a “shipping clerk” for state authorities, he said last week.

Trump said on Friday that he had mobilised the act’s mechanisms to produce “millions of masks”. But Gaynor contradicted that claim over the weekend, saying on CNN that – thanks to donations and voluntary assistance from companies – the country’s supplies were adequate without using the “lever” of the DPA.

Behind the scenes, however, the US State Department was ordering its diplomats in Eastern Europe and Eurasia to seek potential suppliers of “critical medical supplies and equipment”, according to an internal email obtained by Foreign Policy.

Resources are already critically strained in Europe – the pandemic’s current epicentre – where deaths in Italy alone have topped 6,000.

But amid the swell in cases in the US, the WHO is warning of a potential shifting of the epicentre, with agency spokeswoman Margaret Harris telling reporters on Tuesday that the US had the “potential” to become the pandemic’s new hotspot.

The warning comes as experts continue to sound the alarm over critical shortcomings in US preparedness.

“Are we prepared? No. It’s pretty clear we’re not adequately prepared in any sense,” said Ron Waldman, a medical doctor, infectious disease expert and professor of global health at George Washington University. “No is the one-word answer.”

On the medical front, the system suffers from an extreme shortage of equipment, hospital capacity and supplies, he said. The financial sector is devastated, the education system wrecked, the political system deeply divided. And a big concern going forward is social order, he added.

“I’m very worried this is really going to wear on people. We may start seeing some breakdown in law and order,” Waldman said. “Police and national guards have to be really prepared to handle the situation if things really get worse.”

Concerns over the US administration’s handling of the outbreak were fanned further this week by indications from Trump that he wanted to scale back restrictions on Americans’ movement in favour of rebooting the country’s bruised economy.

At a White House briefing on Monday, Trump claimed without evidence that deaths caused by a prolonged economic slowdown would “definitely” outnumber those caused by Covid-19.

Just months away from the November presidential election, key US indices have fallen to their lowest in years, wiping out gains made since Trump took office. “THE CURE CANNOT BE WORSE (by far) THAN THE PROBLEM!” he tweeted on Tuesday. And speaking on Fox later in the day, he said he wanted to “reopen” the economy by Easter, which is April 12.

Megan Greene, a senior fellow at the Harvard Kennedy School, noted a “weird dichotomy” in the US administration’s response. “On the one hand there’s been panic on the economic front, all hands on deck. And on the other, a relatively lax approach on the medical front.”

“The fact that the president said yesterday that we could go back to normal within a few weeks, which is highly questionable, really speaks to that,” she said.

Public health experts have warned that a premature scaling back of social distancing measures could prompt a spike in cases, further burdening health care resources already at bursting point.

Even with sweeping restrictions on movement in place across the country, local authorities are warning that the worst is yet to come, with San Francisco’s public health chief, Grant Colfax, predicting on Monday that cases in the city would surge in one to two weeks.

That forecast came as California Governor Gavin Newsom said the state would need at least 50,000 more hospital beds to face the virus. To meet the shortfall, Newsom introduced a plan on Monday that would see 30,000 new beds provided by the existing hospital system, 3,000 beds from new hospitals recently acquired by the state, and 17,000 from non-hospitals including hotels, motels, fairgrounds, convention centres and other facilities.