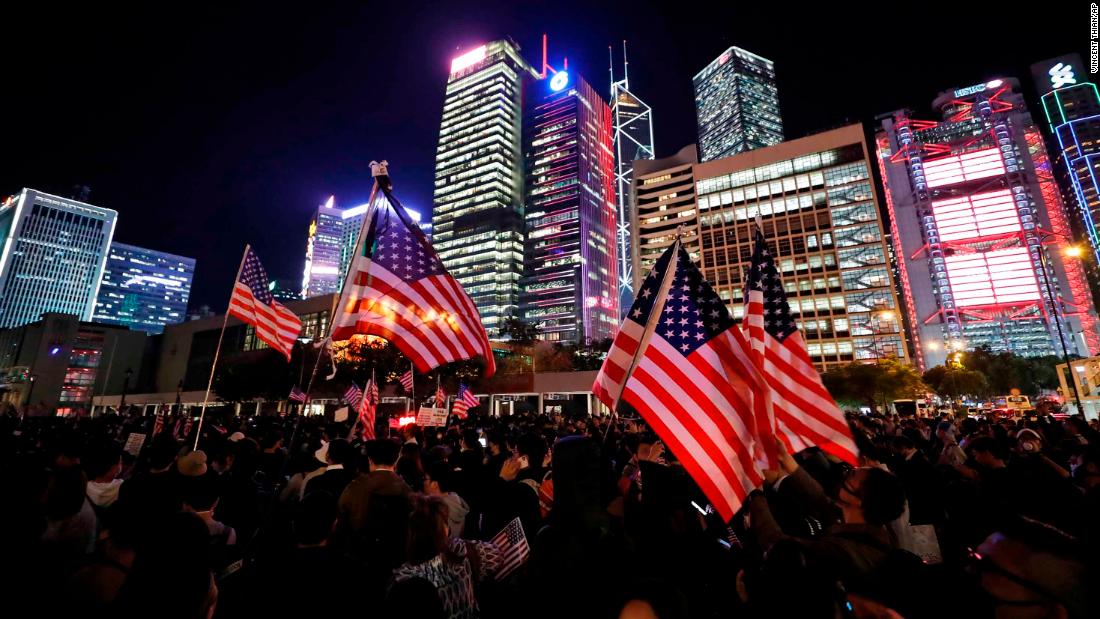 Trump's decision to sign two bills supporting the pro-democracy movement in Hong Kong shows that the President can occasionally do the right thing, even if it isn't necessarily for the right reasons, writes Michael Bociurkiw.

President Donald Trump's tantrum diplomacy can often be summed up as unpredictable, counterintuitive and self-serving. But his decision to sign two bills supporting the pro-democracy movement in Hong Kong shows that the President can occasionally do the right thing, even if it isn't necessarily for the right reasons.

Just last week, Trump cast doubt on his support for the Hong Kong protests when he called in to "Fox & Friends" and said, "We have to stand with Hong Kong, but I'm also standing with President Xi. He's a friend of mine... I'd like to see them work it out, OK?"

But Trump defied the expectations of many on Wednesday and signed the Human Rights and Democracy Act, as well as the Protect Hong Kong Act - both of which passed Congress with broad, bipartisan support.

The first bill authorizes sanctions on Chinese and Hong Kong officials responsible for human rights abuses, while the second bans the export to Hong Kong police of US-made crowd control munitions such as tear gas, stun guns and rubber bullets. This is significant given that Hong Kong police have used teargas produced by NonLethal Technologies Inc., a company based in Pennsylvania. That gap will now presumably be filled by Chinese firms, which should be more than willing to fill the purchase orders of the Hong Kong police.

Trump's move, heralded as an early Thanksgiving present by the protesters in Hong Kong, was met with swift condemnation from China amid ongoing trade talks with the US. But was it a casino roll by Trump to legitimize his credentials on the foreign policy field? Or a risky attempt to show Beijing, amid trade talks, that America means business?

Words of Anger from Beijing

The Chinese Foreign Ministry responded to the US legislation with a statement that read, "The US has been disregarding facts and distorting truth. It openly backs violent criminals who rampantly smashed facilities, set fire, assaulted innocent civilians, trampled on the rule of law and jeopardized social order."

Trump's sign-off is being widely celebrated by the anti-government protest movement, which first erupted in June over a bill that would have allowed Hong Kong residents to be extradited to China, calling into question the "one country, two systems" principle - and Hong Kong's judicial independence - after the UK handed the former colony back to China in 1997. While Hong Kong's chief executive pulled the bill in September, many protesters considered the move too little, too late.

During one of my visits to Hong Kong this summer, I stood among tens of thousands of mostly young protesters in front of the US Consulate in the central business district. Many carried American flags and at the time it seemed uncertain whether the Trump administration, eager to seal a trade deal with China, would risk jeopardizing progress on that front with punitive legislation. "We are here to let Americans know that the US stands for freedom," one male protester told me.

There has been strong bipartisan support for the Hong Kong protests, and both bills were passed unanimously in the US Senate last Tuesday. Even if Trump vetoed the bills, there was enough support for Congress to override him. He likely did the math and decided to sign the legislation rather than open up a new duel with Congress.

What this means for trade talks

Beijing despises suffering a loss of face. Perhaps it knows that the legislation signed by Trump comes with bad PR. But on the other hand it also knows Trump - who may not wish to further damage relations with China or hurt US companies with substantial operations in the city - will likely use the provisions sparingly, if at all.

The good news is that there is little indication that China plans to retaliate by escalating its year-long trade war with the US, or by suspending trade talks. With three weeks to go before painful tariffs kick in, China seems unwillingly to turn the Hong Kong legislation into a major trade irritant.

China is eager for a deal, and it knows that Trump, pressured by growing desperation among his base (such as farmers) ahead of a presidential election, needs to seal a deal. On the other hand, China, faced with a slowing economy that could trigger unrest, has little room to maneuver.

An Uncertain Future Ahead for Hong Kong

What happens next for Hong Kong is uncertain. The US support comes just days after the pro-democracy movement won 17 of the 18 district councils in a local election on Sunday.

The resounding victory was a strong rebuke of the embattled government of Chief Executive Carrie Lam, who said Monday her administration will "seriously reflect" on the outcome.

In the run-up to the Sunday elections, the protest movement, which is said to be leaderless, was able to suspend all violent protests - reportedly in the hopes that it wouldn't give the government an excuse to postpone the election.

But the protest movement says it will continue until all of its demands are met - including an independent inquiry into alleged police violence and misconduct, a general amnesty for arrested protesters, repeal of the classification of the protesters as "rioters" and complete universal suffrage. Protesters are also calling for Lam to step down from her post as chief executive.

The Hong Kong government and Beijing, however, show little willingness to give into the demands, especially for more democratic rights. Xi has said that any attempt to divide China would end with "bodies smashed and bones ground to powder.

From Beijing's point of view, an unruly Hong Kong presents a serious threat, especially if the unrest spreads to the mainland. A sign of China's unwillingness to allow Hong Kong too much autonomy came last week when it called into question local courts' right to declare laws unconstitutional if they contravene the Basic Law or Hong Kong's mini constitution. The move was prompted by the Hong Kong court decision to strike down a controversial anti-mask law that was heavily pushed by Chinese officials.

By messing with Hong Kong's rule of law - a bedrock of the "one country, two systems" arrangement which accounted for the city becoming an international financial hub - China signaled the extent it will go to enforce its will.

Even if Beijing shows restraint towards Hong Kong, it is unlikely that the protests will fizzle out on their own. During my last two visits, I detected an astonishing amount of resentment towards the government, the tiny elite that dominates its economy, and the Hong Kong police force.

The free-wheeling Hong Kong as we know it is not yet lost, but China is in no mood to tolerate dissent. In light of China's repression in regions like Tibet and Xinjiang, it seems the international community, including the United States, has little leverage to support the protest movement in the long run.

The passage of US legislation only plays into Beijing's narrative that dark forces from abroad are behind the Hong Kong protest movement. But at least a US president not known for his defense of human rights - and who has remained mostly silent on the protests - has given the young Hong Kong people on the streets a badly needed jolt of adrenaline.
Add Comment