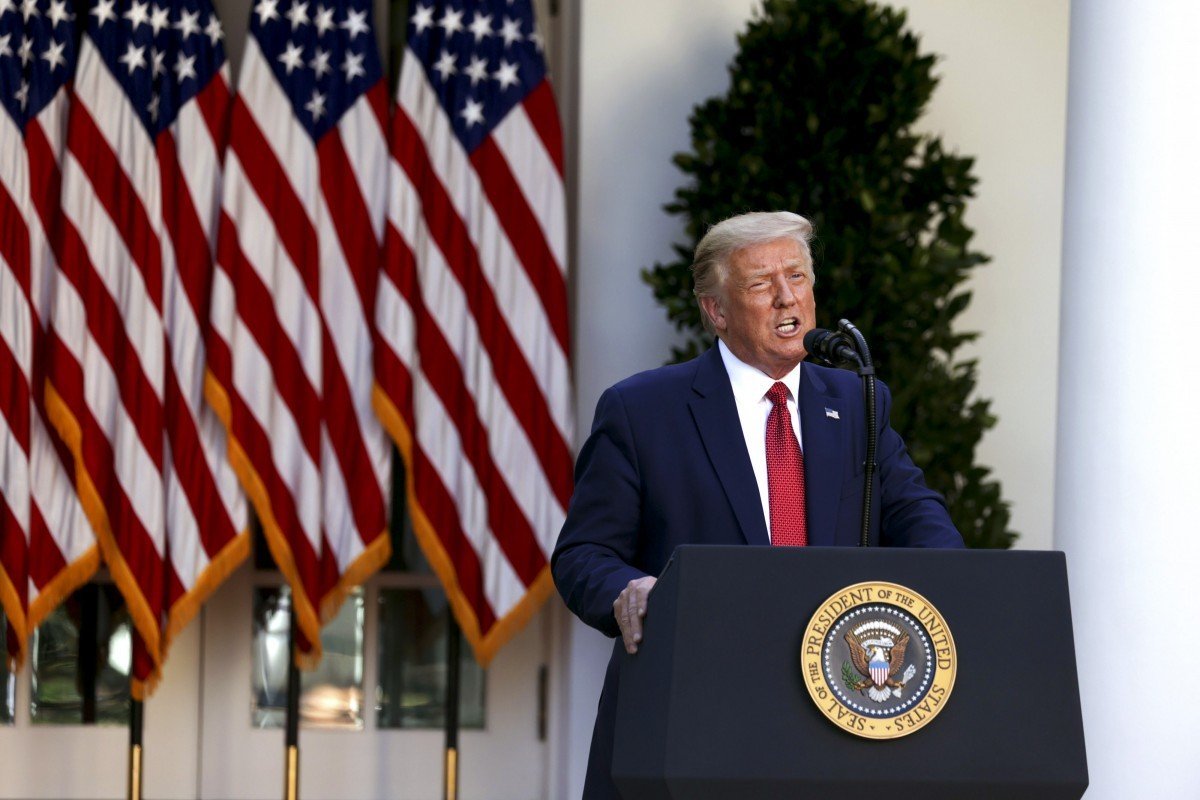 Former senior adviser to US treasury department says lame-duck president could lash out with more sanctions if he’s beaten by Joe Biden in November.

Hong Kong financial institutions could face especially aggressive sanctions from the US if President Donald Trump loses the election against Joe Biden in November, an international sanctions expert warned on Thursday.

Elizabeth Rosenberg, director of the energy, economics, and security programme at the Centre for a New American Security, made her comments on Thursday, during a webinar held by the University of Hong Kong’s law school.

US Secretary of State Mike Pompeo has until October 12 to present the list of sanctioned individuals to Congress. Secretary of the Treasury Steve Mnuchin must also submit a list of non-US financial institutions that have knowingly conducted “significant transactions” with the individuals.

“[The treasury list] could come, if Biden is elected, in the lame-duck period for President Trump, who might be feeling particularly annoyed and frustrated and has a bone to pick with China or Hong Kong, and create the opportunity for some awfully aggressive actions as the grenade you throw as you’re walking out the door,” Rosenberg said.

The treasury department has between 30 and 60 days after the state department acts to publish its list, but Trump is not forced to impose sanctions on those listed.

Rosenberg, formerly a senior adviser at the US Treasury Department who helped develop and implement sanctions on countries such as Iran, Libya and Syria, said it was hard to know what the list would look like, given the “awfully unpredictable” nature of the Trump administration.

But she said it could be expanded beyond the 11 Hong Kong and Chinese officials already sanctioned in August under an executive order, including Hong Kong’s leader Carrie Lam Cheng Yuet-ngor, to include people who worked closely with, or were financially connected with them, as well as financial holdings that act on behalf of them.

Lam has said the US sanctions would only be an inconvenience and not intimidate her. She also dismissed the effect of the sanctions, citing her lack of US assets or interest in visiting the country.

Under the executive order, sanctioned individuals or entities would have their US-based assets blocked, and Americans and businesses generally banned from dealing with them.

Benjamin Kostrzewa, a lawyer specialising in international trade law who was also in the webinar, said the real danger came from sanctions on financial institutions unconnected with the US.

“Right now, a lot of banks are considering what that looks like, and the Hong Kong Autonomy Act and the executive order don't define what will be considered a ‘significant transaction’ with those individuals or material support. So everyone needs to assess that,” he said.

Under the US sanctions, as well as heightened US-China tensions, banks and financial institutions in Hong Kong, such as HSBC, are finding it necessary to make the difficult manoeuvre to satisfy both sides. Banks and financial institutions could struggle to satisfy both sides in the US-China trade war.

A ray of hope, Kostrzewa said, would be that the sanctions allowed for flexible interpretation, and regulators are likely to give banks the space to comply with both sets of laws, or have discretionary enforcement.

However, he warned Hong Kong could also adopt the maximalist approach to enforcement, just as the US could.

“If that’s the case, then it will force banks and other institutions to pick between complying with Chinese and Hong Kong laws, or complying with US sanctions enforcement,” he said.

“And it’s going to put compliance departments and major banks in a very awkward position, having to navigate a very tight tightrope.”

Earlier, Hong Kong’s police chief Chris Tang Ping-keung, who was among the 11 officials sanctioned by Washington, was found to have shifted his mortgage from HSBC to Bank of China (Hong Kong) days before the US enacted its policy.

Hong Kong Police Credit Union – whose 45,000 members included current and retired police officers – had also moved its estimated HK$11 billion (US$1.4 billion) in assets from foreign banks to mainland banks in the city since May.