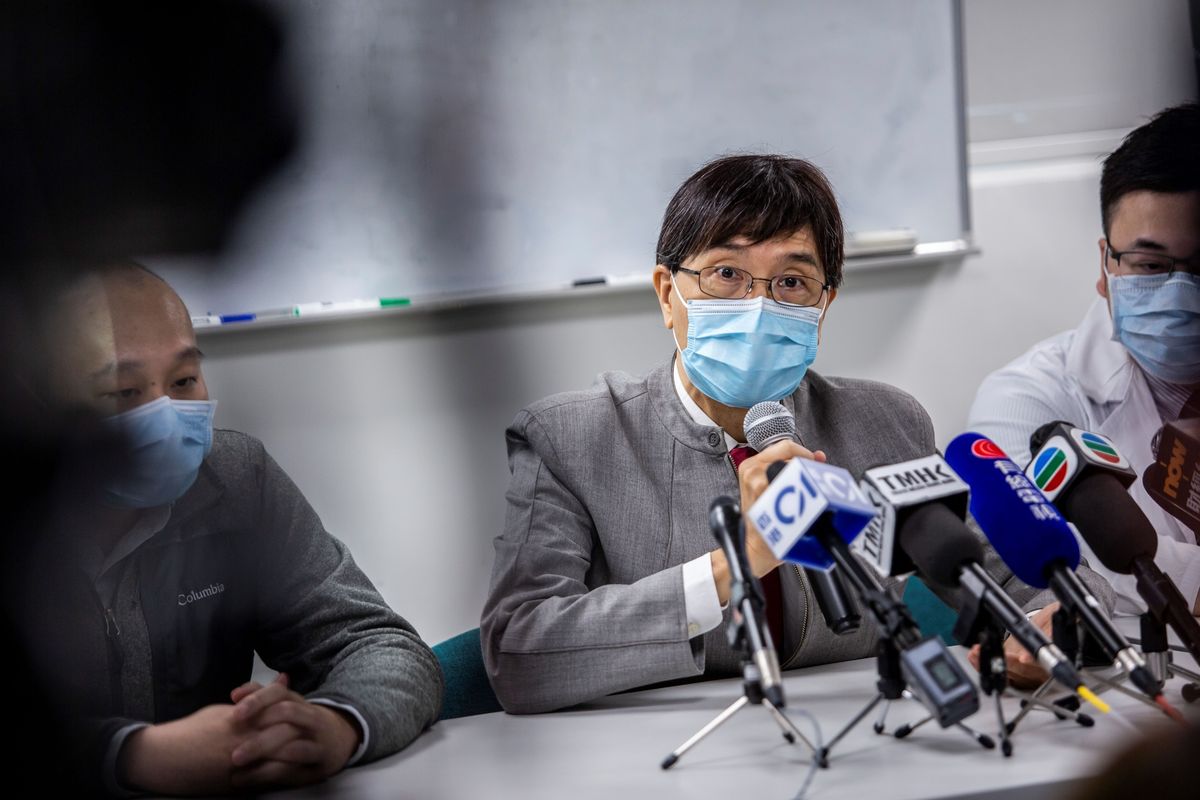 Hong Kong’s top pandemic doctor sees a way out of intensive care for thousands of Covid-19 patients: keeping them from entering in the first place.

After sobering experiences 17 years ago with the outbreak of severe acute respiratory syndrome, Yuen Kwok-Yung is advocating early, aggressive hospitalization and treatment to minimize ravaging disease and death. Hong Kong’s 2% Covid-19 fatality rate as of Friday, well below the global average, lends weight to the approach.

Most therapies for SARS-CoV-2 are authorized for use in severely ill patients, in some cases backed by research that’s still in question. Yuen, the Henry Fok professor in infectious diseases at the University of Hong Kong for 15 years, is admitting patients with minimal disease so they can be isolated, monitored and treated if needed.

“In places like the U.K. and U.S., usually if you have mild symptoms, you are not admitted to a hospital at all -- you just wait at home until you feel very bad or you have shortness of breath,” he explained over Zoom from his office. “But we basically admit any patients, even without much symptoms, into the hospital for isolation.”

The strategy reduces transmission in the community, and enables patients to enter a clinical trial and receive experimental treatment soon after developing a fever or showing other signs of worsening illness, Yuen said. That’s critical because the amount of SARS-CoV-2 virus or “viral load” in patients peaks at around the time symptoms appear -- similar to influenza.

Yuen, who graduated from the University of Hong Kong in 1981 and has the rare distinction of being a microbiologist, surgeon and physician, has been at the forefront of the city’s response to infectious outbreaks for decades. In 1998, he and colleagues described the first dozen patients afflicted with the H5N1 strain of avian influenza. Five years later, they reported SARS in a patient visiting Hong Kong from Guangzhou, China.

Yuen recalls the trial and error involved in saving patients from SARS, also caused by a coronavirus. Soon after, he identified “a time bomb” of environmental and social conditions that he predicted would inevitably result in more deadly coronavirus outbreaks.

That prediction came true in December, when the first cases of a mysterious pneumonia came to light in Wuhan, in China’s Hubei province. Hong Kong responded to the novel coronavirus by preparing tests and advising citizens to wear masks.

Meantime, Yuen’s lab was conducting research that led to the first reported cluster among family members in which human-to-human transmission of the new coronavirus occurred. In February, he joined the WHO-China Joint Mission to investigate the country’s early response and his lab has since reported a number of important findings, including the first confirmed SARS-CoV-2 reinfection.

“All this is an extension of our experience in the year 2003,” Yuen said. “We have nothing to brag about because we learned bitterly from 2003 SARS.”

The appearance of an unknown virus to which no one has immunity created a desperate need for effective treatments. Hong Kong doctors are using several experimental treatments, including infusions of convalescent plasma -- a mix of factors extracted from recovered patients’ blood -- and injections of interferon, an immune-system protein.

“No antiviral will work if given late,” he said. The drugs were also administered singly, rather in combinations that could add to their impact, he said.

“We know that one drug is not good because all of these are very modestly active,” Yuen said. “We need early cocktail therapy to get good results.”

Giving a combination of ribavirin, Kaletra and interferon to patients in the first week of illness reduced the time to clear the virus by six days and shortened hospitalization by a week, when compared with giving Kaletra alone, Yuen and colleagues showed in a study in May.

The trial, published in The Lancet medical journal, recruited 127 patients from Feb. 10 to March 20 -- more than half of the Covid-19 cases reported in Hong Kong during that period. Patients began treatment about five days after developing symptoms.

“With the memory of the 2003 SARS pandemic, most patients with Covid-19 in Hong Kong accepted antiviral treatment, which explained our high recruitment rate,” Yuen and his team wrote.

Sixteen years earlier, Yuen and many from the same group showed that a cocktail of ribavirin and Kaletra prevented serious illness and death in SARS patients. Saudi Arabia researchers said earlier this month that Kaletra given with interferon improved survival in patients hospitalized with Middle East respiratory syndrome, also caused by a coronavirus. The effect was greatest when treatment was started within a week of symptom onset, the authors said, noting “an important time-to-treatment effect on mortality.”

Evidence is mounting for early use of interferon in some patients. Blockbuster studies published by the journal Science last month showed about 14% of critical Covid-19 patients have insufficient levels of the substance, which orchestrates defenses against viral pathogens.

If the body mounts a good interferon response when the viral load is low, it can limit subsequent viral replication and prevent dangerous inflammation, Yuen said. A late or delayed interferon response to a high viral load, though, may trigger severe damage to the lungs. “This is really disastrous,” he said. That’s made injections of interferon the “backbone” of early treatments.

Some doctors outside Hong Kong agree with Yuen’s approach. Using antivirals early may suppress viral load and prevent the serious hyper-inflammatory response some patients develop in their second week of illness, said Richard Russell, a respiratory physician and senior clinical researcher in the Nuffield Department of Medicine at the University of Oxford, who is also conducting studies on Covid-19 patients.

Yuen’s strategy has pointed to how multiple existing antivirals may be repurposed and partnered with immune-modulating drugs as a bridge until protective vaccines become available, said Steven Opal, clinical professor of medicine at Brown University in Providence, Rhode Island.

Dexamethasone, a cheap, generic anti-inflammatory, was found in June to reduce deaths by almost a third among Covid-19 patients receiving mechanical ventilation. The University of Oxford study confirmed what Yuen had observed with SARS patients in 2003: that the medication could quell the immune overreaction, sometimes called a cytokine storm, in deteriorating patients showing signs of inflammation.

Dexamethasone and Gilead Science Inc.’s remdesivir help patients with more advanced disease, said Anthony Fauci, director of the National Institute of Allergy and Infectious Diseases. “The one thing we really need to do is get a bunch more interventions for early infection to prevent people from going on to needing hospitalization,” he said in an interview with the American Lung Association this month.

Yuen’s team is also investigating the potential of clofazimine, an inexpensive, 50-year-old antimicrobial that’s on the WHO’s list of essential medicines for leprosy. Studies in hamsters indicated it could fight SARS-CoV-2 and prevent infection.

Hong Kong took rapid and decisive action in response to Covid-19 because of the legacy of SARS, Yuen said. He hopes others will learn from the current crisis about the need to prepare for and mitigate the risks of future pandemics.

“It’s the 2003 experience that allowed us to walk another mile early,” Yuen said. “I hope that everybody in the world will learn this time that emerging infectious disease is something that would happen more and more frequently.”