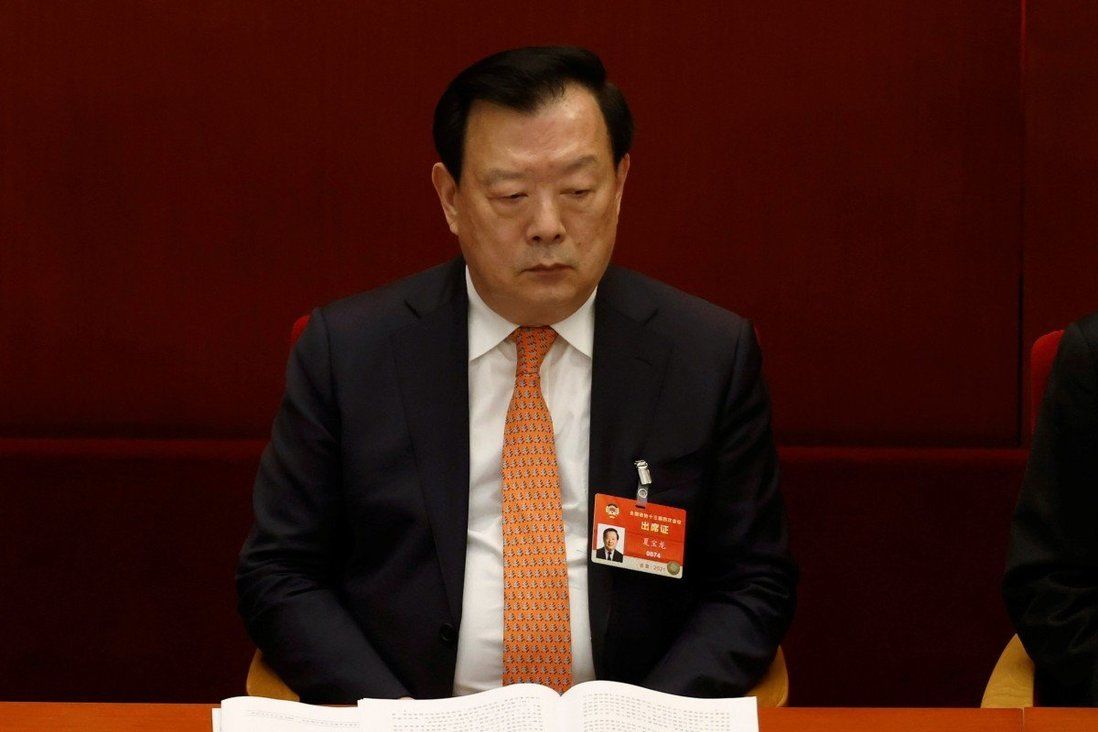 Xia Baolong, director of State Council’s Hong Kong and Macau Affairs Office, tells lawmakers they must be ‘firm patriots’ who protect national security and defenders of executive-led model of government, among other duties.

A top Beijing official overseeing Hong Kong affairs has laid out his expectations to a group of newly elected lawmakers in an unprecedented meeting, urging them to cooperate with the executive branch while defending national security.

Xia Baolong, director of the State Council’s Hong Kong and Macau Affairs Office, also told the 20 pro-establishment lawmakers on Wednesday the legislature had turned into a platform for “anti-China disrupters” in recent years but Beijing’s shake-up last March of electoral system finally got it back on the right track.

While Beijing representatives have in the past met local government officials following their appointment, the meeting in Shenzhen, Guangdong province, was the first time such an official had met newly elected lawmakers.

The legislators were sworn in on Monday, two weeks after the first citywide election under Beijing’s “patriots-only” electoral overhaul. No members of opposition parties were among them.

Legco president Andrew Leung Kwan-yuen, who attended the two-hour gathering, said Xia was delighted by the election results which he said had returned “patriots”.

The director hit out at the opposition for using the legislature as a platform in the past to challenge the constitution, national security and the executive-led model of the local government.

“[Xia] said the Legislative Council over the past five years has deviated from its constitutional order and become a platform for ‘anti-China disrupters’ … which affected the city’s governance and image,” Leung said.

“He attributed the chaos to the electoral system, which he said had opened the door for these disrupters, and the fact that the discipline in Legco has not been strictly enforced in the past which created a broken window.”

Xia reiterated that Beijing was sincere in introducing democracy – one with Hong Kong characteristics – to the city, according to Leung, and he called on the city to solve its deep-seated social problems following the election.

It was “appropriate” for central government officials to offer guidance to lawmakers given Beijing now exerted its full jurisdiction over Hong Kong, the Legco president added.

That included being a “firm patriot” who would actively protect national security, a defender of the executive-led model of the government and a true representative of the people. Xia also urged them to be diligent and called on them to remain united, despite their differences.

“[Xia] said that Hong Kong’s Legco was a legislative branch under the executive-led model. It should exercise checks and balances while cooperating with the [government], and the focus should be placed on cooperation,” veteran pro-establishment lawmaker Martin Liao Cheung-kong said.

The Beijing official also suggested the legislature’s power was granted by the central government and subject to its scrutiny, Liao added. 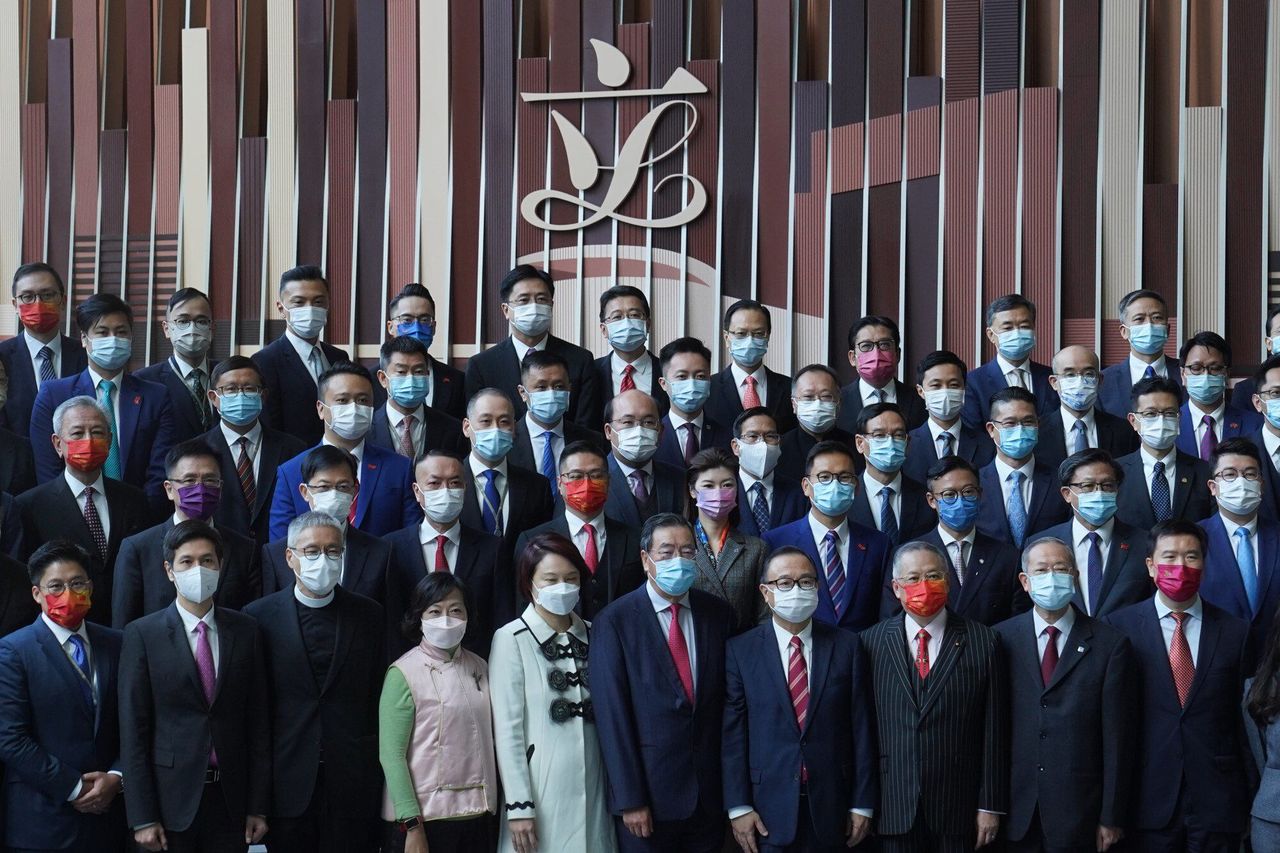 Newly elected legislators pose for pictures after their oath-taking ceremony at the Legislative Council building on Monday.

Among those who attended the meeting were Leung Kwan-yuen, Starry Lee Wai-king and Gary Chan Hak-kan of the Democratic Alliance for the Betterment and Progress of Hong Kong, New People’s Party lawmaker Regina Ip Lau Suk-yee, Alice Mak Mei-kuen and Stanley Ng Chau-pei of the Federation of Trade Unions and Lo Wai-kwok, of the Business and Professionals Alliance.

The December 19 poll saw the Beijing-friendly bloc sweep all but one seat in the new 90-member legislature amid a record low turnout of only 30.2 per cent. Mainstream opposition parties sat out the election, which they said was designed to stifle dissent.

Tik Chi-yuen, chairman of the centrist party Third Side who was the only non-establishment candidate who won a seat, said he was informed on Wednesday morning that some lawmakers were travelling north for a meeting, but he was not invited.

“Many pro-establishment legislators were also not invited. I don’t think Xia was ignoring us,” he said.

“The system is executive-led, not executive tyranny. Lawmakers monitor and cooperate with the government by reflecting public opinion, but the executive branch also needs to cooperate with us and respect us,” he said.

“In the past, there was no executive-legislative relationship to speak of, as the two branches could not work with each other at all. I think that’s what Xia wanted to change.”

Lau Siu-kai, vice-president of semi-official think tank the China Association of Hong Kong and Macau Studies, said Xia was trying to remind the lawmakers of their new role under the new political landscape.

“In the past, when there were opposition lawmakers, some pro-establishment legislators were somehow forced to support the government as if it were a rubber stamp.

“Now Xia is suggesting that with the opposition lawmakers gone, the new legislators will have much room to make constructive criticisms.

“They just needed to bear in mind that the city’s political structure is executive-led,” he said.