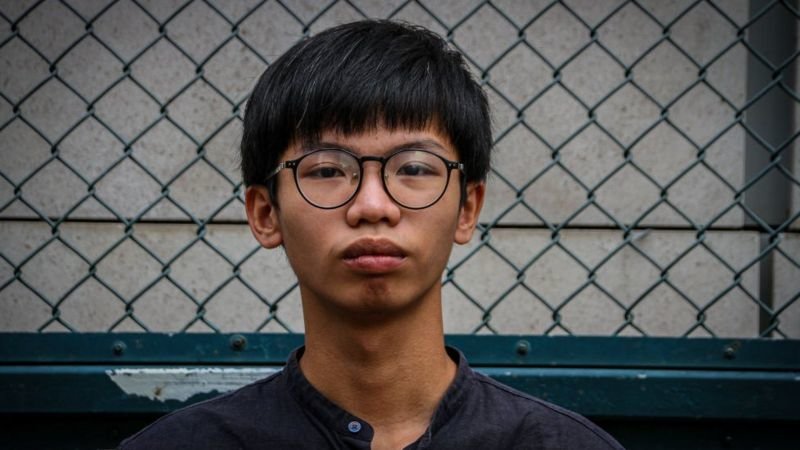 Mr Chung, 19, had reportedly planned to enter the consulate and claim asylum.

Mr Chung, the second person to be charged under the law, was denied bail by the court.

The controversial law was imposed by China on Hong Kong in June, making it easier to punish protesters and reducing the city's autonomy.

The law is wide-ranging and gives Beijing extensive powers which it never had before to shape life in the territory.

Critics say the law erodes the city's judicial independence and rights like freedom of speech, and that it has created a sense of fear and uncertainty in Hong Kong.

What do we know about his detention?

According to the South China Morning Post, Mr Chung was detained on Tuesday morning at a coffee shop opposite the US consulate.

UK-based activist group Friends of Hong Kong said he had planned to enter and claim asylum. Instead, footage taken from near the consulate showed him being carried away by plain-clothes police.

Mr Chung, a former member of pro-independence group Studentlocalism, had previously said that life under the new law had become more restrictive for him and other activists.

He told BBC Chinese in a recent interview that he felt he could not talk or act freely, and had to "worry about the red lines all the time".

But he also said activists had not given up fighting and that "at the right moment, we will come out to protest again".

"Yes we lose at this moment. But the road to democracy is always long."

He will remain in custody until his next court appearance on 7 January next year.

Hong Kong's national security law was imposed by Beijing in June after months of huge pro-democracy protests last year against an extradition bill.

The new law makes secession, subversion of the central government, terrorism or collusion with foreign forces punishable by up to life in prison.

In July, several were arrested under the new powers, including a man carrying a "Hong Kong Independence" flag.

Critics say it effectively puts an end to the freedoms guaranteed by Beijing for 50 years after British rule ended in Hong Kong in 1997, but China says it will return stability to the city.

After the passing of the security law, the UK's Prime Minister Boris Johnson said he would offer up to three million Hong Kong residents a chance to settle in the UK and ultimately apply for citizenship.

China has condemned this, saying it would take countermeasures against the UK should it grant residency to Hong Kong residents.