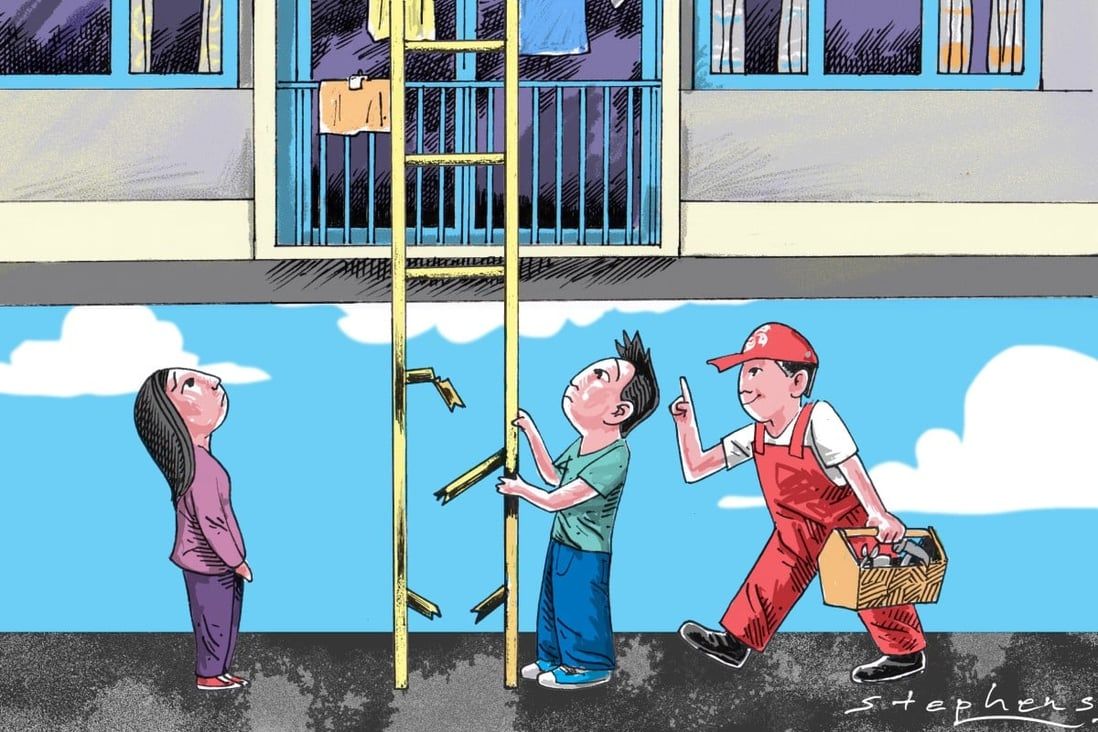 More starter homes and youth hostels are good ideas that take time. Why not also free up existing housing resources by opening up the ‘white form’ scheme for a start?
The youth housing problem has been a catalyst of Hong Kong’s deep-seated conflicts. As housing prices hit new highs over the past two decades, outpacing young people’s income growth, home ownership has become increasingly elusive.

Although housing prices have corrected in recent months, with more drops to come, home ownership remains difficult for most young people in the least affordable housing market in the world.

We are glad to see the government paying more attention. If most young people never set foot on the housing ladder, they will be excluded from the fruit of Hong Kong’s economic development. The socio-economic disparity between homeowners and the rest will widen further, exacerbating the wealth gap and jeopardising social stability.

To calculate the income-to-cost ratio for university graduates aged 25-29 years buying 1 sq ft in a Type A unit (less than 430 sq ft) in the New Territories, where housing prices are relatively low, we obtained information from the population census. In 2016, the monthly income of the top 10 per cent was HK$37,000 (US$4,751).

Buying 1 sq ft needed only a quarter of this salary. Buying a flat required no more than nine years of income. That said, back in 2001 the price per sq ft only took up 8 per cent of the monthly salary of an elite graduate.

But for the rest, home-buying ability dropped severely. In 2016, the median monthly income of university graduates was HK$19,000. Almost half of this would be required to buy just 1 sq ft.

This left them with limited options in the private housing market; they could only turn to subsidised government flats under the Home Ownership Scheme (HOS). Yet in 2001, the average graduate would have spent just 15 per cent of the monthly income on 1 sq ft of home.

The picture got much worse for the bottom 10 per cent of university graduates. In 2016, when the average monthly pay was HK$11,000, 1 sq ft would eat up 80 per cent of this compared to just 25 per cent in 2001. For many graduates, the income level in 2016 had fallen behind by so much, they qualified for public rental housing.

Sadly, as single applicants are allocated only a very limited number of units, the young and single stand a very small chance. Failing to find affordable housing, they often postpone plans to start a family and even dismiss the idea of marriage.

The unmarried can only apply for public rental housing as singles and this is also a long shot. Left undealt with, this vicious circle of youth housing challenges, late marriage and a low birth rate will leave a lasting demographic impact.

Studies show that property is the most common means of wealth accumulation. In Hong Kong, home ownership also defines social status. Research shows the probability of children from low-income families becoming low-income adults is double that of ordinary teenagers.

For those from families with no home ownership, the probability rose to six times that of ordinary teenagers. Home ownership has become definitive of upwards mobility.
While boosting the supply of public and subsidised housing is the obvious solution, sourcing land for construction takes time. Thus, we suggest the government fully capitalises on existing resources to mend the broken housing ladder.

The key lies in the HOS resale market scheme, known as the White Form Secondary Market Scheme, which allows eligible buyers to buy subsidised housing units on the resale market without paying a land premium, making it affordable for many first-time buyers.

But transactions in this highly restricted market are slow and difficult; the latest quota is just 4,500 flats.

We propose that the scheme opens fully to young people of middle to low income. This can alleviate the undesirable situation of highly educated young people waiting for public rental units. The government should also encourage private home ownership among the young through tax and down payment schemes.

Chief Executive Lee displayed pragmatism in his first policy address. We believe the government can help young people get on the housing ladder and reduce the wealth disparity so everyone can lead a contented life with decent accommodation in the long run.
Add Comment