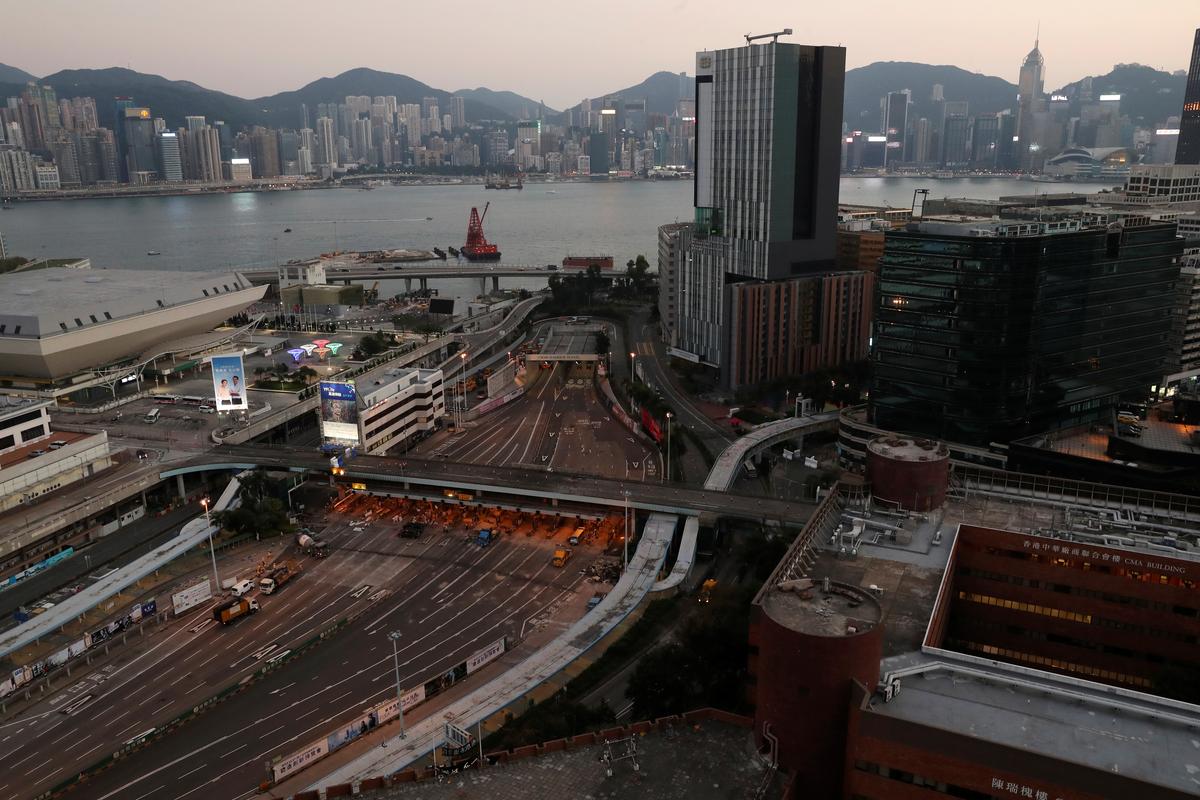 'Time to calm down': Hong Kong protests simmer ahead of local elections

An uneasy calm settled over Hong Kong on Saturday as the city prepared to stage local elections seen as a referendum on months of anti-government protests, after weeks of especially violent clashes between police and demonstrators.

On the grounds of the besieged Polytechnic University on the Kowloon peninsula, a dwindling number of protesters desperately sought a way out and others vowed not to surrender, days after some of the worst violence since anti-government demonstrations escalated in June.

One student protester who escaped the police cordon around the university without being arrested said on Saturday he had not expected the elections to go ahead.

“I don’t feel optimistic about the outcome at all,” he said, predicting that the discontent will only escalate. “I cannot see the end in sight.”

Just after midnight, a man dressed in a white shirt and face mask was led out by the hand by another man and taken into a nearby police van.

A small group of medics roamed the campus early on Sunday, searching the buildings looking for remaining protestors believed to be holed up inside.

The city is under tight security as a record 1,104 people gear up to run for 452 district council seats in Sunday’s elections.

A record 4.1 million Hong Kong people, from a population of 7.4 million, have enrolled to vote, spurred in part by registration campaigns during months of protests.

For the first time, riot police will guard all polling stations in the city and almost all officers in the 31,000-strong force will be on duty, the South China Morning Post reported on Friday, citing a senior police source.

The source told the newspaper that the officers would seek to minimise their presence to avoid worrying voters.

Asked about the report, the police department would say only that it had been liaising with other departments to provide assistance, arrange “appropriate police force”, and ensure that the election was carried out smoothly and in an orderly manner.

At a Chinese People’s Liberation Army barracks that borders Polytechnic University, meanwhile, dozens of soldiers in riot gear were seen practicing drills, according to a Reuters witness.

The soldiers carried shields and wore helmets with face guards, and were glimpsed from a high building marching in formation on an inner parade ground not visible from the road.

PLA soldiers have not publicly engaged in anti-riot efforts on the streets of Hong Kong but such drills suggest a high degree of preparedness amid the current protests.

Both Chinese and Hong Kong leaders have repeatedly said that Hong Kong police can handle the situation but Beijing has more than doubled the number of troops in the city since late August, with up to 12,000 on bases scattered across the territory.

The protests snowballed from June after years of resentment over what many residents see as Chinese meddling in freedoms promised to Hong Kong when the former British colony returned to Chinese rule in 1997.

Beijing has said it is committed to the “one country, two systems” formula by which Hong Kong is governed. It denies meddling in the affairs of Hong Kong, an Asian financial hub, and accuses foreign governments of stirring up trouble.

However, Australia’s Age newspaper reported on Saturday that an apparent Chinese intelligence service agent is seeking asylum in Australia after saying he had details on Beijing’s political interference in Hong Kong, Taiwan and Australia.

Young pro-democracy activists are running in some of the seats that were once uncontested and dominated by pro-Beijing candidates.

One pro-democracy candidate for the Wan Chai district council, Chris Chan, said the election would reflect public opinion after the upheaval of recent months.

“It is time for us to calm down and tell the government in a civilized way what we want to do,” he said.

“I’ll continue to stay here, but hopefully not forever,” he said with a touch of humour.

Few protesters were still visible on the campus, and a visiting lawmaker said their number was so small that there is no need for the police to enter the campus.

Many of the remaining protesters were in hiding, fearful of possible arrest and wary of those urging surrender, said Woo Kwok Wang, the 22-year-old acting president of the university’s student union. He said he had been on the campus since Wednesday to provide support for the students.

Natasha Reyes from Medecins Sans Frontieres, which has had a presence on the campus since Tuesday, said their team of medics had been treating a dwindling group of protesters.

Standing at a makeshift medical station, she said, “They’ve been around in a highly stressful situation for several days now... I am concerned about the mental health.”

About 1,000 people have been arrested or registered by police in the university siege, about 300 of them younger than 18.

Police have set up high plastic barricades and a fence on the perimeter of the campus. Towards midday, officers appeared at ease, allowing citizens to mill about the edges of the cordon as neighbourhood shops opened for business. Some roads next to the campus had reopened by Saturday afternoon.

Scores of construction workers worked at the mouth of the Cross-Harbour Tunnel to repair toll booths smashed by protesters and clear debris from approach roads.
Add Comment