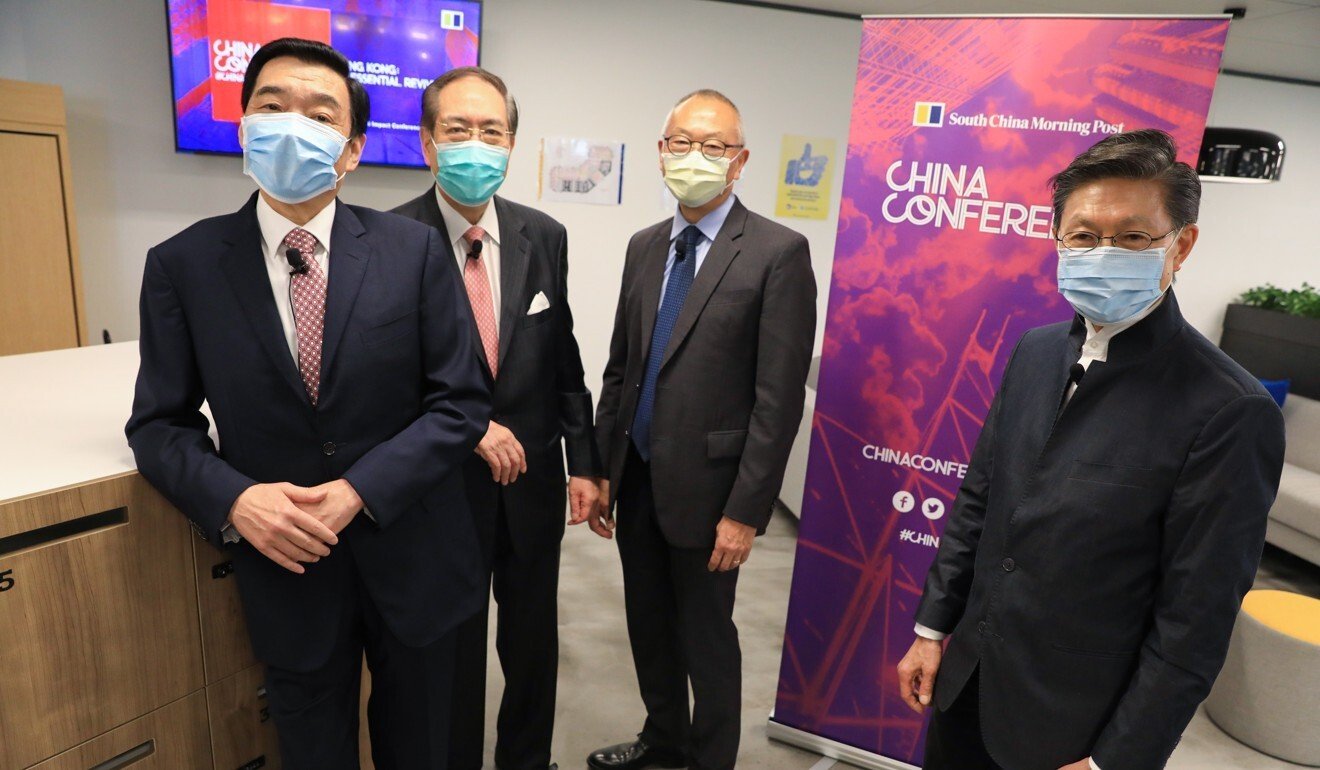 Time for Hong Kong to shift from containment to mitigation, experts say

‘Naive’ to think city is without unidentified cases, coronavirus expert tells China Conference, as panellists make case for shift to mitigation strategy. Government adviser reveals talks under way to ease border restrictions with Taiwan, along with Macau and mainland China

The reappearance of local Covid-19 infections was to be expected, rather than premature cause for alarm over a wider community outbreak, top health experts said on Thursday, as they called for a shift in Hong Kong’s strategy from a containment approach to learning to live with the coronavirus.

The fact that the latest cases – involving a grandmother and her family members – had been identified as locally transmitted meant the city’s monitoring system was working, they told the China Conference, organised by the South China Morning Post.
A government adviser also revealed that, in addition to Macau and mainland China, the administration was in talks with Taiwan about relaxing border control measures, as it was paramount to take the city’s economic recovery into account.

While hospitals in other countries were still struggling to contain the coronavirus, the city’s health facilities were ready to gradually resume full operations, Hong Kong’s public hospital chief said, while tapping into innovative means to avoid cross-infections.

The discussion came as the infected grandmother’s husband was confirmed with Covid-19 as well, after their granddaughter also tested positive. Their contact tracing will require thousands to be tested for Covid-19 as health authorities look into the possibility of invisible community transmissions.

The grandmother’s case broke a 23-day streak without a locally transmitted infection in Hong Kong, with many of those days recording no imported cases as well.

Dr Keji Fukuda, director of the School of Public Health at the University of Hong Kong, said at the conference that it would be “naive” to assume the city would be free of the coronavirus.

“We always know there will be cases in Hong Kong that we cannot identify, and it would be arrogant to think we would be able to know the traces of every case in Hong Kong,” said Fukuda, a member of the government’s expert team on Covid-19 and former director of the World Health Organisation’s influenza programme.

The new local cases should not come as a surprise, he said, and should be seen as proof that the city’s screening system was working well.

The next step would be to probe those cases and respond accordingly, without jumping to conclusions as to whether it was necessary to reverse the recent easing of social-distancing measures, he said.

In March, the Hong Kong government put in place a ban on public gatherings of more than four people and ordered 11 types of businesses and leisure facilities closed. Those measures were relaxed last week, with most of the businesses allowed to reopen and gatherings of up to eight people permitted.

Every speaker at the conference agreed the pandemic would last for a long time.

Dr Yeoh Eng-kiong, former health minister and professor of public health from the Chinese University of Hong Kong, suggested switching focus from containing the disease to detecting it and mitigating it, now that the pandemic was easing.

Hong Kong has been coping well partly because it has stringent border control measures in place that have significantly reduced the number of infected people coming in, while testing arrivals and placing them under mandatory 14-day quarantine.
All non-Hong Kong residents, except those from the mainland, Macau and Taiwan, have been barred from entering the city entirely.

But sooner or later, businesspeople would come in again, Yeoh said, while those living in the city would be eager to fly out for holidays.

He urged the government to take note of plans being explored by other countries, such as the “travel bubble” eyed by Australia and New Zealand, which would allow their borders to be opened to each other only.

Ventilation in shops and the offering of hand sanitiser on their premises would be among some of the arrangements to mitigate risks, he said.

Executive Council member Arthur Li Kwok-cheung said the government had been using a “lift and suppress” approach to strike a good balance between public health concerns and economic activity.

Li said the government was negotiating with authorities in Macau, Taiwan and neighbouring Shenzhen to gradually return border controls to normal. But even if Hong Kong were to relax the two-week quarantine period, he said, those jurisdictions would have to reciprocate accordingly for the arrangement to work.

Hospital Authority chairman Henry Fan Hung-ling said the city’s public hospitals were gradually reviving non-essential services. He said the authority had left it up to hospital clusters serving different districts to decide the pace at which those services would resume.

But he warned of uncertainty ahead, saying, “I think, like the rest of the world, the Hospital Authority is entering into an era of a new norm or a new normal.”

Fan also stressed the need to avoid or minimise the chance of cross-infection within hospitals.

From now on, patients would be asked to arrive soon before their appointments, unlike the past when they could turn up as they wished, he said. Public hospitals were also exploring ways to deliver medications to chronic patients, possibly by teaming with logistics companies.

“We had a painful lesson this time where we had a critical stage where our personal protective gear [supply] could last only for a month,” he said.

Fan pledged to focus on ensuring a sufficient supply while reviewing plans to enhance isolation services for any potential future outbreaks.

Secretary for Food and Health Sophia Chan Siu-chee said the city’s efforts began to bear fruit following its implementation of a three-pronged approach focusing on border control, quarantine and isolation, and social distancing.

She said the government would continue to make timely adjustments in response to the ongoing pandemic, and had been working on increasing its capability to conduct testing. As of May 10, she said, Hong Kong had carried out 180,000 Covid-19 tests, meaning that for every 1 million people, more than 23,800 had been tested.