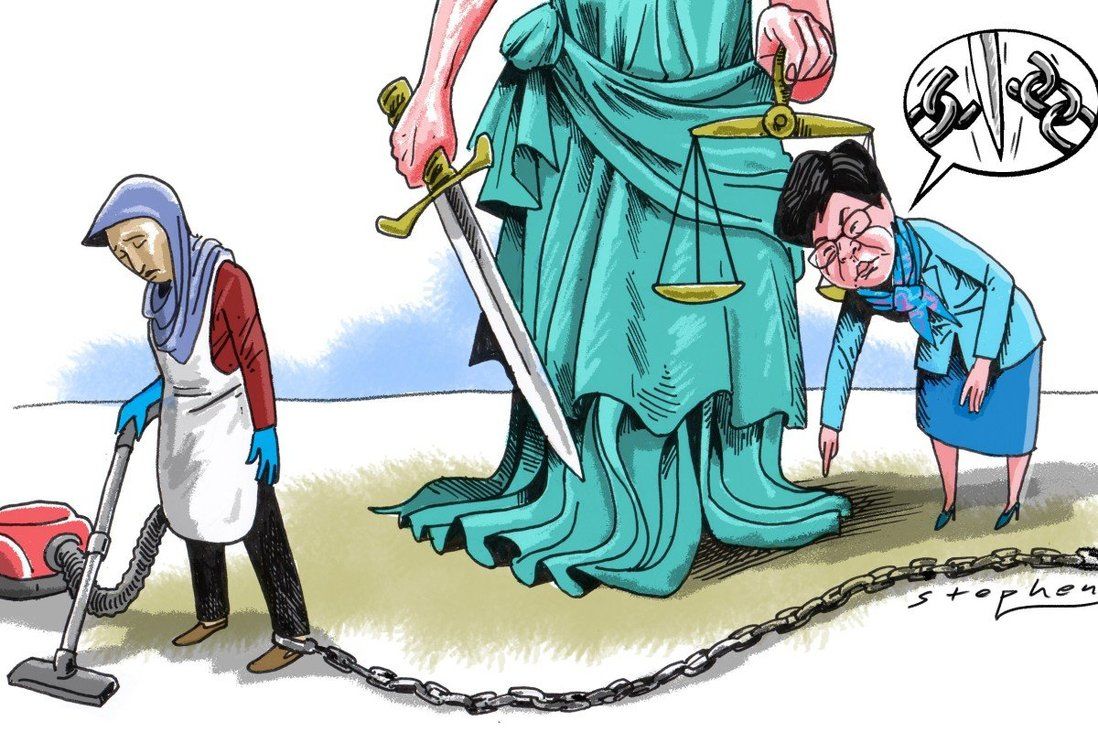 With dissent and protests stifled, the chief executive and lawmakers now have a free hand to shape the city’s future. If they want to improve Hong Kong’s global image, they should treat those less fortunate with a little more fairness, kindness, empathy and humility.
As she ran for chief executive in 2017, then-chief secretary Carrie Lam Cheng Yuet-ngor told Hong Kong people she would transform our city for the better. Her 777 votes were a harbinger of how lucky Hong Kong was to become under her leadership as chief executive.

Now, with protests and dissent no longer possible under China’s national security law for Hong Kong and prickly legislators and newspaper editors either in jail or in exile, Lam has indeed transformed Hong Kong in ways no previous chief executive or colonial governor did in the space of five years.

There is no more meaningless meandering about universal suffrage as Beijing has asserted its comprehensive jurisdiction over Hong Kong and revamped election rules for the city. Only patriots can stand for office.

Endowed with a Legislative Council she has always wanted for passing bills more quickly, how should Lam use it to demonstrate her motherly leadership qualities as she possibly contemplates running for a second term?

Last week, as my host and I drove from Cape Town to Stellenbosch, a sight struck me like no other. It was not Table Mountain or waves of the Atlantic Ocean but, rather, an endless sea of shacks whose simplicity, extensiveness and proximity to each other were all the more visually remarkable because of their vibrant colours.

It was Khayelitsha, one of the largest slums in the world. Having lived in a shack in Chai Wan as a toddler in the early 1980s, I was tempted to visit the area. After some deliberations, however, we decided that to “sightsee” other people’s poverty, misery and despair as if a tourist attraction would be obscene.

Poverty, misery and despair are not confined to slums or to Africa. They manifest in contemporary forms of slavery that occur in all corners of the globe and are deeply embedded in transnational supply chains, including in Hong Kong. The pandemic has only exacerbated the suffering, vulnerability and exploitation of victims of modern slavery.

Covid-19 has intensified our fear of the unknown and led governments to divert resources at the expense of the most marginalised and vulnerable. Lockdown measures have worsened the isolation and physical and mental abuse that victims of modern slavery endure.

The insidious nature of modern slavery makes it more difficult to be tackled without addressing underlying risk factors including public attitudes, systems and institutions.

In Hong Kong, many of the city’s 370,000-plus foreign domestic workers live and work within the walls of often luxurious blocks of flats but in conditions akin to modern slavery. The Race Discrimination Ordinance, enacted in 2008, has done little to improve their predicament.

Hong Kong imposes “two-week” and “live-in” rules on these workers, the latter upheld by the High Court in 2021 even when a foreign domestic worker was on maternity leave. These rules facilitate practices of forced labour, which the International Labour Organization Forced Labour Convention prohibits.

A 2016 report by Justice Centre Hong Kong, a non-governmental organisation, found one in six foreign domestic workers in the city was a victim of forced labour.

With no laws against modern slavery, Hong Kong also serves as a major hub for human trafficking. According to Walk Free’s Global Slavery Index 2016, in terms of government responses to modern slavery, Hong Kong was in the same league as the Central African Republic, the Democratic Republic of the Congo, Equatorial Guinea, Eritrea, Guinea, North Korea, Papua New Guinea and South Sudan.

Like Lam, many victims of modern slavery are mothers whose main goal is to support their families back home. The United Nations special rapporteur on the human rights of migrants noted in 2004 that “many female migrant domestic workers tend to work in precarious and exploitative conditions”.

The United Nations Office on Drugs and Crime noted in its report on the impact of the Covid-19 pandemic on trafficking in persons that women and girls have been particularly affected by lockdown measures. Such measures aggravate exploitative labour practices and human trafficking for purposes of domestic servitude and sex slavery.

We have a tendency to regard those less fortunate as diseased. This was illustrated by the government’s plan, from which it retreated last May following widespread condemnation and diplomatic backlash, to require all – and only – foreign domestic workers to be vaccinated against Covid-19.

Meanwhile, the government exempted the likes of actress Nicole Kidman and JPMorgan Chase CEO Jamie Dimon from regulations it imposes on everyone else because they are too important and apparently somehow immune to Covid-19, exemplifying Hong Kong’s unhealthy attitudes towards money and white privilege.

Money merely magnifies who you really are. As Lam seeks to rebrand Hong Kong, she might give the city’s public relations campaign a real boost by showing the world Hong Kong intends to treat those less fortunate with a little more fairness, kindness, empathy and humility.

With rule of law in Hong Kong reigning supreme, there is no better time for Lam to ensure lawmakers enact legislation that tackles modern slavery in all its forms. No tears necessary.
#COVID-19  #Covid
Add Comment