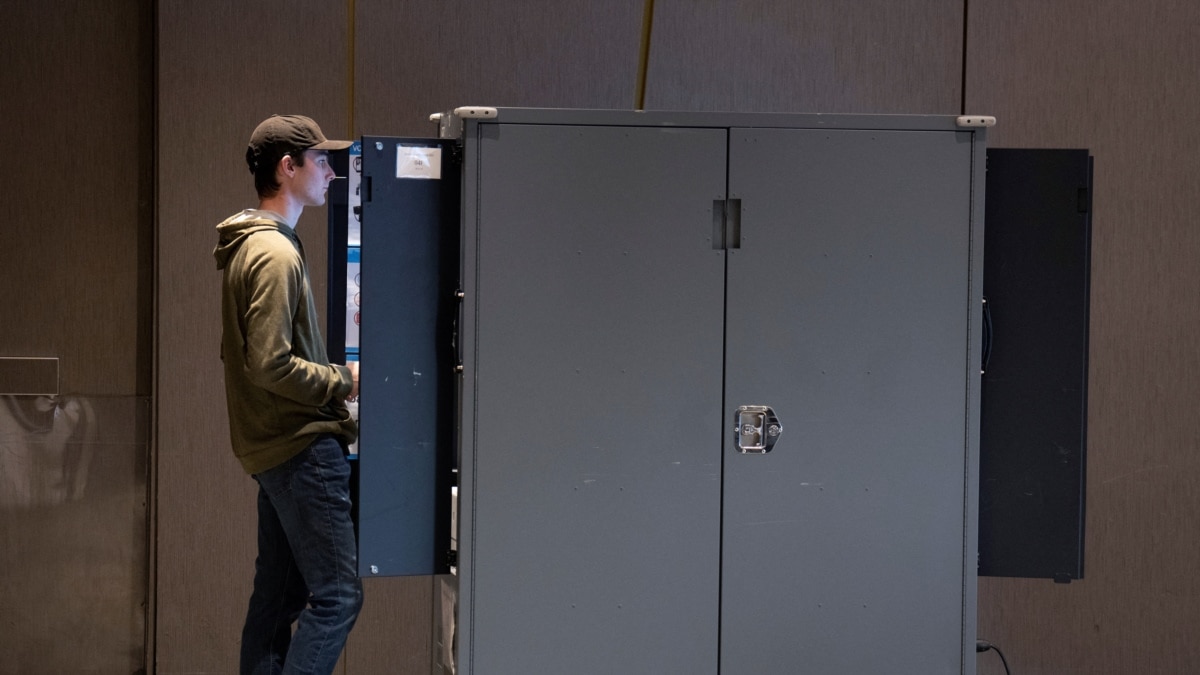 Driven by concerns about climate change, public education and, to a lesser extent, access to abortion, 21-year-old Ava Alferez made sure to vote in the 2022 midterm elections.

“I don't think it's right to complain about something if you don't get out there and vote,” says the Virginia college student, who describes herself as a liberal democrat. “I also think that every vote matters.”

Alferez is among millions of America’s youngest voters who voted in near-record numbers during the 2022 midterms, breaking heavily for Democrats, and thwarting an anticipated ‘red wave’ that many expected would hand Republicans a significant majority in Congress. The strong showing signals that Gen Z is a rising political force.

“I think Republicans don't account for Gen Z and they don't realize the impact that we will have, especially within the next five years,” says Eric Miller, a 20-year-old Virginia college student who identifies as a Republican and says he voted for Donald Trump in 2020. “I think the 2022 midterms are a little bit of a wake-up call for Republicans to be more in touch with young people.”

Midterm elections occur halfway through a president’s four-year term. All 435 seats in the House of Representatives — where members serve two-year terms — and 35 of 100 Senate seats were up for grabs in 2022. 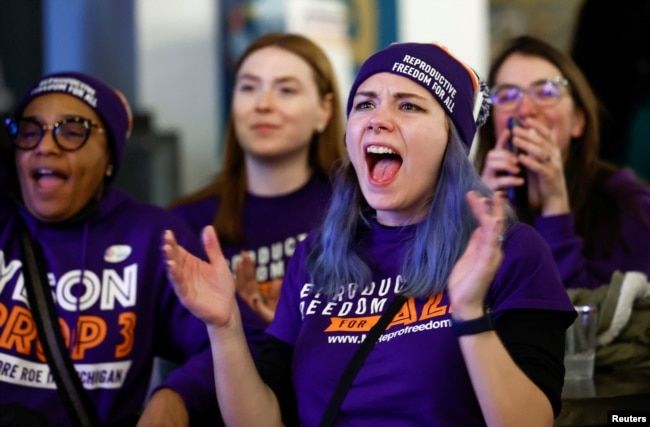 Women cheer during a Reproductive Freedom For All watch party on election night in Detroit, Michigan, November 8, 2022.
Historically, the president's political party almost always loses seats in Congress with the opposing party traditionally making significant gains. Republicans did pick up a majority in the House this election cycle, but only by a handful of seats, while Democrats narrowly held on to the Senate.

“I think the data is going to bear out that young voters were quite consequential in many of these swing states and some of these elections,” says John Wihbey, an associate professor of media innovation and technology at Northeastern University.

The early numbers from the Center for Information and Research on Civic Learning & Engagement (CIRCLE) suggest that 27% of people between the ages of 18 and 29 cast ballots Nov. 8, the second-highest youth midterms turnout in 30 years. (The highest was in 2018.)

Young evangelicals are not that different from their more liberal peers, according to a recent survey.

“They are diversity and equity conscious, more so than older generations and, therefore, they're going to take those things seriously and listen to people who talk about those things, like AOC [New York Rep. Alexandria Ocasio-Cortez] or [Vermont Sen.] Bernie Sanders,” says Kevin Singer, co-director of Neighborly Faith, a partner in the study. “They're very, I guess you could say, cosmopolitan when it comes to their political perspectives.” 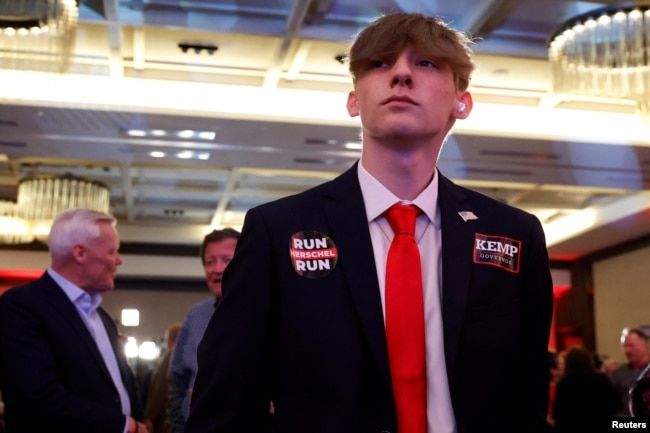 A young voter at an election night party for Georgia Republican candidate for U.S. Senate Herschel Walker at the Omni Hotel in Atlanta, Georgia, November 8, 2022.

Wihbey says Gen Z doesn’t get its news from traditional sources like newspapers but rather gets secondhand or filtered news from social media, which has resulted in young voters forming opinions about politics at a much greater rate than previous generations.

“I wouldn't say that's surprising at all because everyone's just on their phones all the time on social media,” says Alferez, who says she has voted in every election since reaching voting age. “It would make sense that they get all their information on TikTok or maybe if they see a political post, they’ll still look in the comments and everyone's very opinionated and comments, and they'll probably form opinions based on that.”

CIRCLE’s early analysis shows that young voter turnout may have delivered key wins for Democrats in some battleground states, but that doesn’t mean either political party can take the youth vote for granted.

“It's possible that younger voters will be less tethered to a particular party and may vote on an issue basis more frequently,” Wihbey says. “I think part of what the digital world does is it creates fewer strong ties to particular parties or causes and emphasizes the new or the rising social issue.” 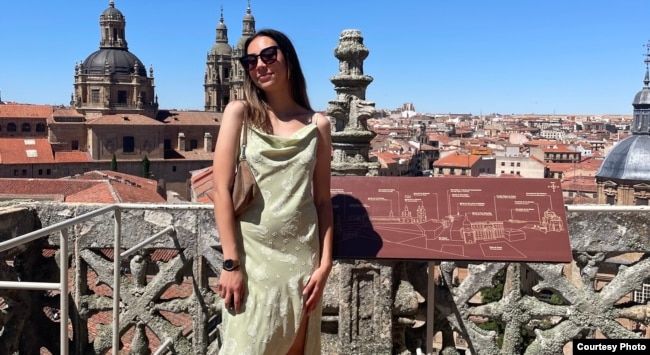 College student Ava Alferez, 21, of Virginia, says she votes in every election.

That appears to be true of young voters across the political spectrum, according to the results of the survey of young evangelicals.

“They're less beholden to the Republican Party, I think, than older generations are, and we also see that they listen to Fox News and, say, CNN at about the same rate,” Singer says. “They listen to Joe Biden and listen to Elon Musk, and that's not a huge surprise given that Generation Z is a lot more comfortable with drawing inspiration from a variety of sources than they are being held to the norms of certain institutions.”

“We do a little more research. We don't just watch, maybe, Fox News, and we listen to the other side, what they're trying to say,” Miller says. “I think the center is where everything is key. Obviously, I don't think the extremes will ever get along in any kind of time frame. But I think we can reach out to moderate Democrats, even liberals — but just not progressive liberals maybe — but I definitely see a way forward.”

The results of the survey of young evangelicals appears to confirm increased openness on the part of Gen Z conservatives.

"Young evangelicals are frankly just more peaceable with others than older generations are. Our study found that, for example, they're more likely to be engaged with people of different faiths than their faith leaders encourage them to be,” Singer says. “There's definitely more of an enthusiasm about diversity and pluralism and I think, for that reason, they're more likely to entertain the perspectives of those with whom their parents would disagree.”

“My worry is that, as we see a lot of policy whiplash, whether it's on reproductive rights or on other things, that they become cynical or disengage,” Wihbey says. “I think one of the most important things here is that they see the political system that we have in our democracy as an important lever of social change, and not as something that just is a kind of dead end.”

Oh ya 70 days ago
Kids from brain washing indoctrination centers voting before they experience real life in the outside world. They believe their professors that their gender studies degree is going to make them a living and then go into huge debt and end up at the drive-thru window at Rotton Ronnie's. Maybe voting should be limited to people who are full-time employed or retired from work.
View all comments (1)Add comment