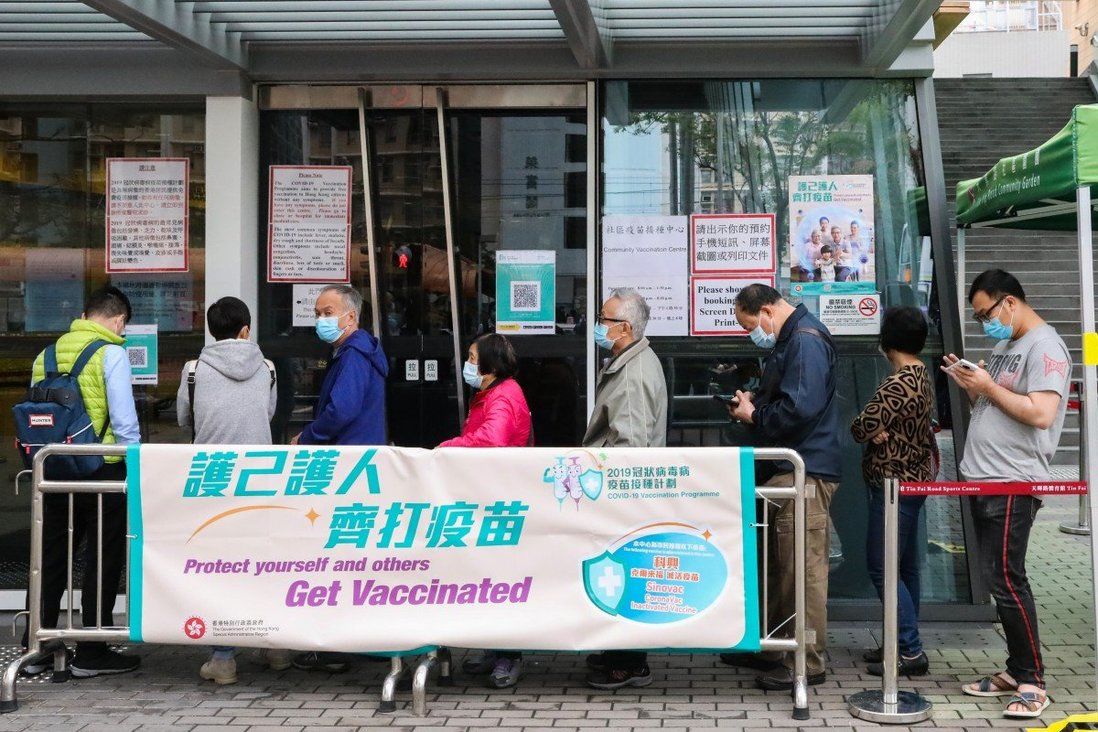 Civil Service Bureau apologises after error involving 47-year-old woman and two family members who visited the wrong site and got the BioNTech shot instead of Sinovac.

Three more people have been given the wrong Covid-19 vaccine after mixing up inoculation centres, Hong Kong officials have said, taking the total number of residents who were not properly screened on-site to at least five.

The disclosure prompted a government pandemic adviser to urge officials to tighten their protocols at the city’s inoculation centres, with several vaccine recipients who spoke to the Post reporting mixed experiences at the sites, noting that while all had identified the jabs on offer one way or another, there was still room for improvement.

Dallas Sanders, a 47-year-old teacher who took his second BioNTech shot on Wednesday at Tai Po Hui Sports Centre, recalled seeing notices both outside the building and inside the lift showing the manufacturer and brand name of the vaccine being administered there.

“It’s easy to walk into the wrong centre, but it’s difficult not to know you’re getting the wrong jab,” he said, adding that one woman was turned away because she had a booking for the Sinovac shot.

“Everything was done fine where I was, but there could be more signage around the centre.”

A 43-year-old finance worker, surnamed Lee, said that when he went to get his first jab at the Sai Wan Ho Sports Centre on Tuesday there had been a sign telling visitors that the site was administering Comirnaty vaccines at the start of the queue.

However, neither the sign nor the staff he spoke to mentioned the name of the jab’s manufacturer – BioNTech – the moniker by which the shot is arguably better known.

While both the brand and the manufacturer were listed on the front of a booklet he was given, which he was required to sign, they could be possible to overlook, he said.

“When I booked my shot, I did so for the Fosun-BioNTech vaccine. This is the same description the government uses in its list of vaccination centres,” Lee said. “As such, most people would be familiar with the pharmaceutical company rather than the name of the vaccine. So the workers should use the name of the company when referring to the vaccine to prevent any mix-ups.”

EJ Clave, 32, who works in sales and marketing said he did not see any signs that specified which vaccine was being administered at Sun Yat Sen Memorial Park Sports Centre in Sai Ying Pun when he went to get his shot on Thursday.

However, staff there did ask him which vaccine he intended to take, and double-checked with him before administering his second dose of the BioNTech shot.

Meanwhile, domestic worker Del Bunsoy, 33, said “it was quite clear” she was receiving the Sinovac shot at the Hong Kong Central Library in Causeway Bay on Thursday, where posters displaying both the manufacturer and brand names of the vaccine were stuck on the front door.

“They asked me twice, ‘Do you know which vaccine you’re taking?’ … Once before I went into the centre, and another time inside the centre,” she said. “They even asked me if I’m pregnant or not.”

The three newly revealed cases of mistaken injections involved a 47-year-old woman and two of her family members who booked a Sinovac vaccination at Tin Fai Road Sports Centre in Tin Shui Wai on March 10, but mistakenly went to the Yuen Long Sports Centre – around 7km away – and were injected with BioNTech instead.

The Civil Service Bureau, which is responsible for the city’s vaccination programme, issued an official apology to the family of three and helped them book their second dose of the BioNTech shot.

Since the revelation of the mistaken jabs, officials have pointed out that abundant information was provided about the immunisation programme, including the details of the vaccine types and inoculation centres, on the online booking system.

The names of the vaccines and the inoculation centres were also clearly stated when people arrived, they added, and additional videos and reading materials were available, with recipients required to sign a consent form before they went into the vaccination booths.

“Under this framework, it shouldn’t happen that people go to the wrong vaccination centre without on-site staff noticing,” a spokesman said.

Asked if a thorough review of the screening procedures at vaccination centres would be carried out, the bureau said it had notified staff to closely verify the booking information of jab recipients and to make clear what type of shot the venue was administering to avoid similar incidents in the future.

Two vaccines have been approved for emergency use in Hong Kong – CoronaVac, produced by China’s Sinovac Biotech, and Comirnaty, which was jointly developed by US-based Pfizer and Germany’s BioNTech, and is supplied through the mainland firm Fosun Pharma.

Professor David Hui Shu-cheong warned that mistakenly injecting people with the Sinovac shot could be risky, as the vaccine had a lot of restrictions on its use, especially for pregnant women and those with poorly controlled chronic illnesses and neuromuscular diseases.

Although the BioNTech jab should be suitable for most people, he added, staff administering the vaccine needed to run a tight ship when it came to the storage and dilution of the medicine.

Hui said he believed the recent mix-ups were isolated incidents, but authorities should issue clear instructions for staff at the vaccination centres.

“A majority of those working at the reception station of the community vaccination centres are retired government workers, not necessarily medical workers,” he said. “I think after such cases arise, staff should tighten their registration process to ensure jab recipients arrive at the right centre administering the same vaccine they had booked.”

A statement from the Hospital Authority’s New Territories West Cluster – which oversees the Yuen Long Sports Centre site where the latest mix-up occurred – clarified that government employees normally handled the registration and administration of vaccination centres, while medical workers from the authority carried out the actual injections. 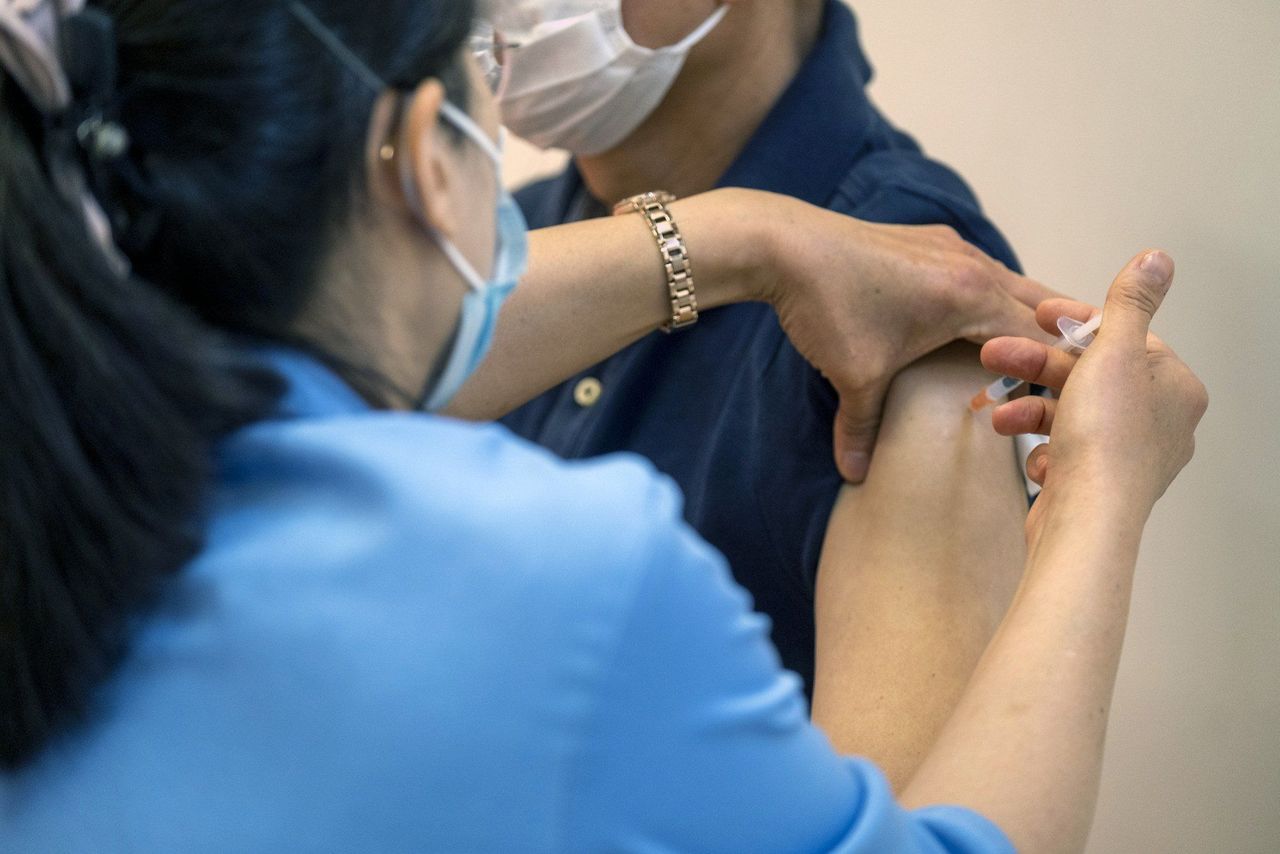 According to the Hospital Authority, government employees oversee admin duties at vaccination centres, while medical staff handle the actual injections.

“Generally speaking, after registration, members of the public need to watch an informational video and sign the consent form on the spot before being vaccinated, which both contain information about the BioNTech vaccine,” the statement said.

“After [the mistaken recipients] received the BioNTech jab and stayed at the resting station, they asked nurses on-site [at the Yuen Long centre] to check their booking details again. The SMS message confirmed their vaccination appointment location as Tin Fai Sports Centre.”

The New Territories Western Hospital Cluster reported the incident to relevant government departments the same day after they were alerted to the mix-up.

The latest incident comes after a similar one, reported by the Post on Sunday, in which a 55-year-old blood cancer patient named David Allardice and his companion, who is more than 70 years old, were given the Sinovac jab rather than the BioNTech one they had booked.

Allardice and his companion booked a slot to receive the BioNTech jab at Hiu Kwong Street Sports Centre in Kwun Tong at 6.30pm on March 18, but wrongly went to Kowloon Bay Sports Centre, which is about 3km away and only administers Sinovac shots.

The bureau admitted that reception staff at the Kowloon Bay Sports Centre failed to screen Allardice and his companion and apologised.

Asked at the time if they had received other reports of the wrong vaccine being administered, the spokesman declined to comment further.