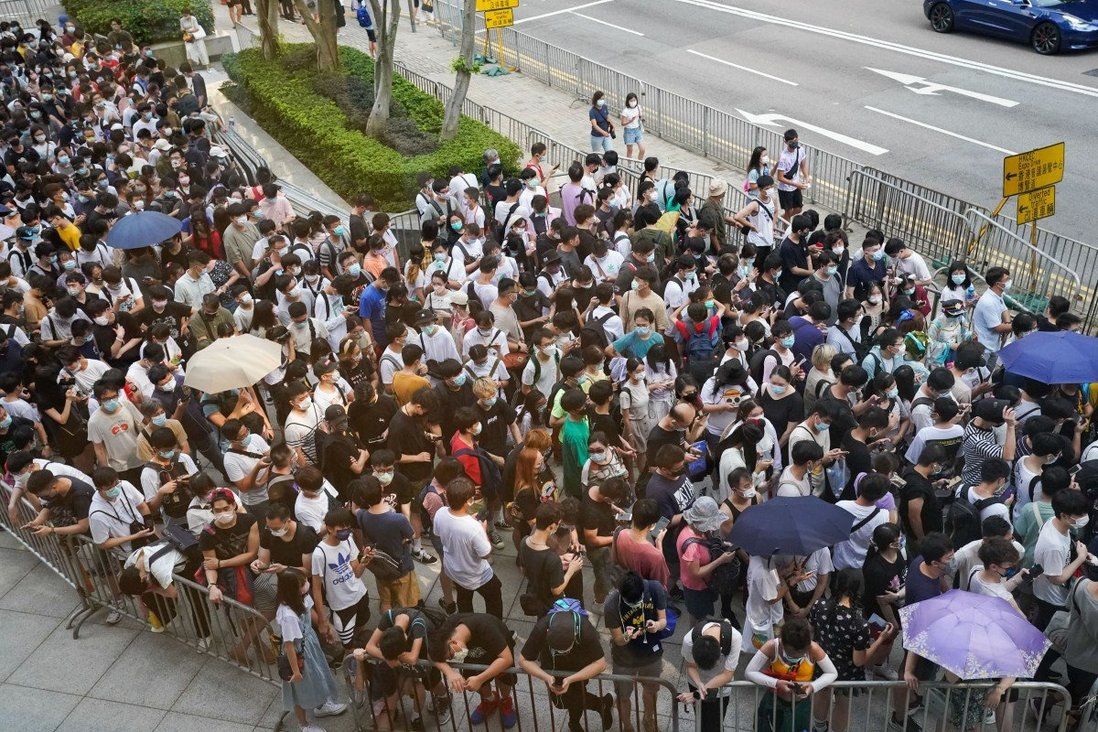 Thousands of Hongkongers – some of them in costume – were left queuing for hours under the hot sun as they waited to be admitted to an annual anime fair on Sunday, with the organiser blaming the delays on an abrupt reduction in the capacity of the venue due to social-distancing rules.

Organisers of the four-day Ani-Com & Games Hong Kong event – which features exhibitions not only of anime, but also comics, cosplay, toys, games and esports – said a last-minute government decision to reduce the cap on the venue’s capacity from 75 per cent to 50 per cent had caused waits to stretch to around four hours. 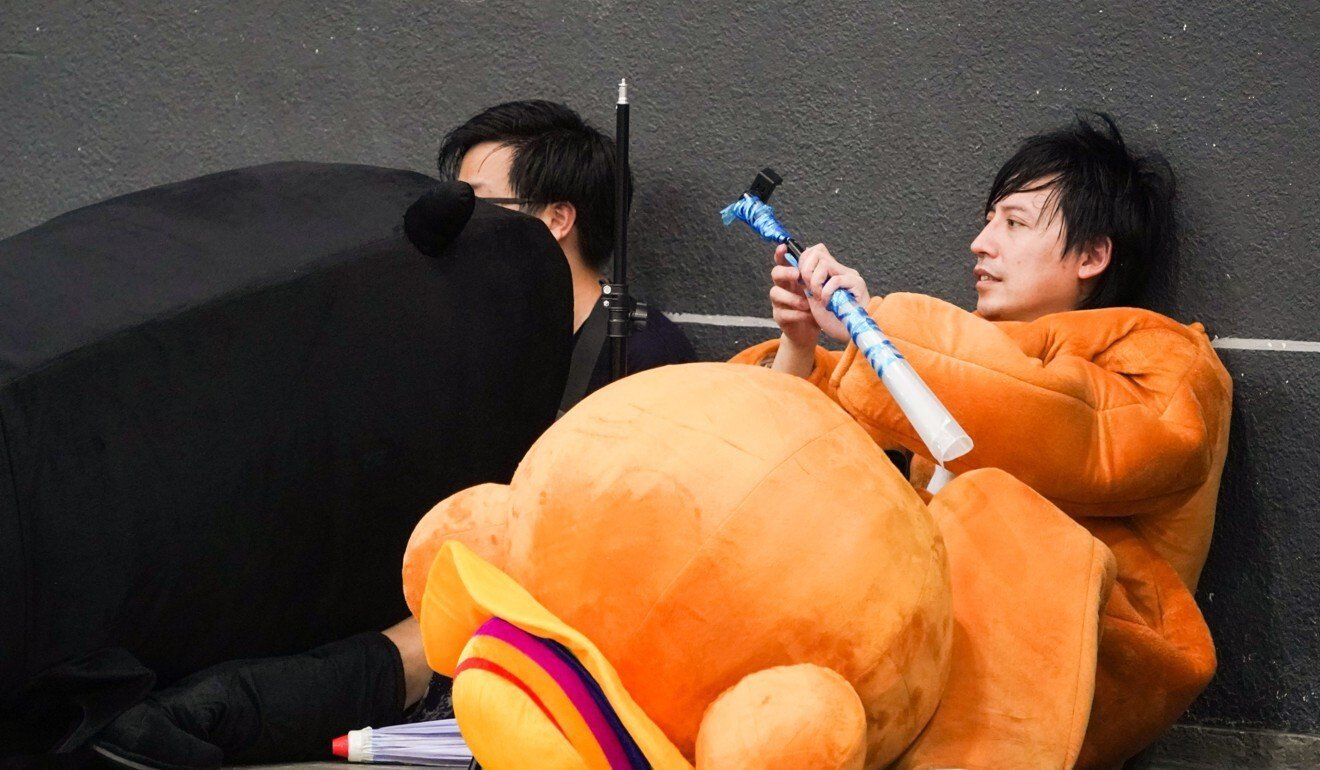 The heat took a toll on those stuck in lengthy queues outside the Convention and Exhibition Centre.

The queue snaked around Wan Chai’s Convention and Exhibition Centre, and appeared to start blocks away. Dozens of security guards could be seen ushering people around.

A cosplayer who gave her name as Kitty said she had been waiting for at least 1½ hours.

Sporting a purple wig and a schoolgirl outfit, the 17-year-old complained about the heat, saying she had not known about the capacity changes, nor seen any instructions from organisers.

“This is my first time here, and probably the last,” she said, holding a cup of bubble tea to quench her thirst.

The event, which started on Friday and closes on Monday, was postponed twice last year in response to the local pandemic situation.

On Sunday, organisers were updating the queuing time every half-hour on social media, maintaining that the capacity limit was not their idea, and blaming the problem on a sudden change of social-distancing rules that went into effect on Thursday. 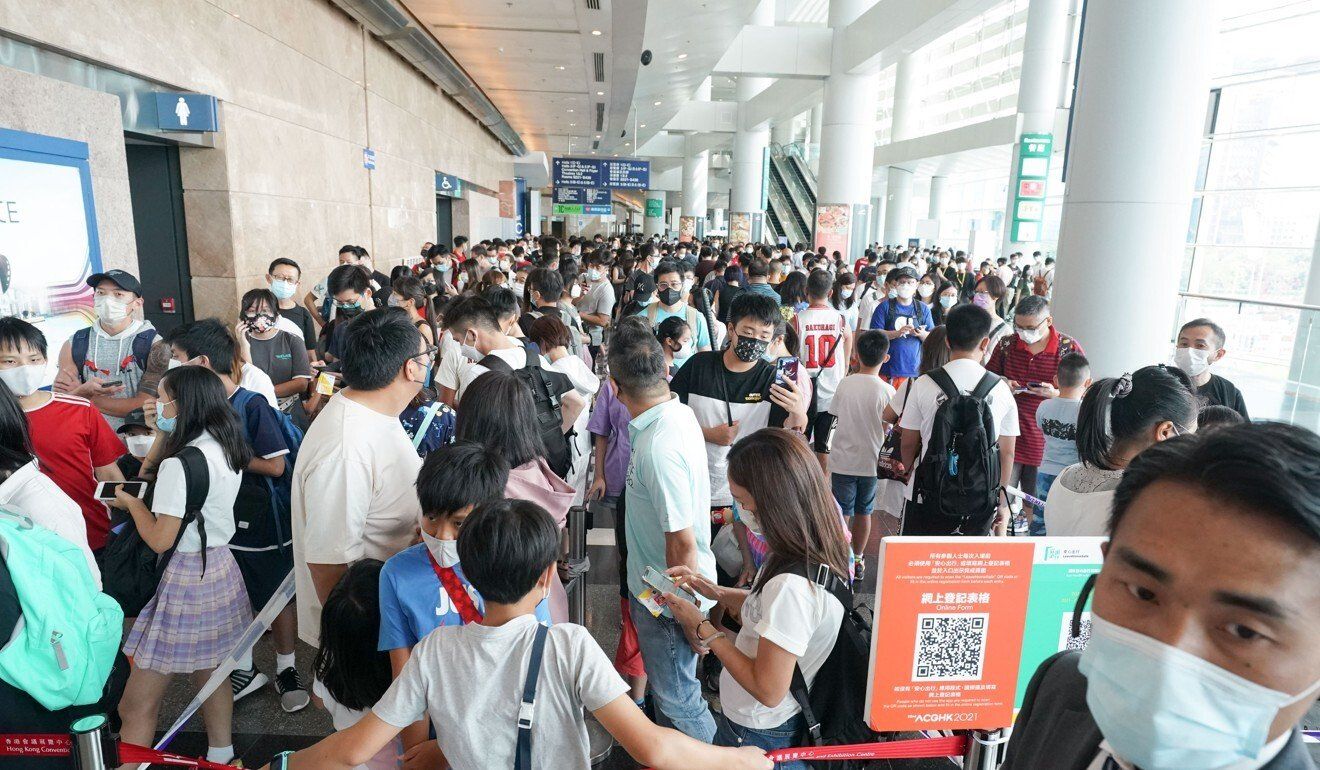 Some angry fans demanded refunds from the organisers on social media.

Angry fans who bought tickets in advance only to queue for hours to enter left bitter messages on the show’s Facebook page and demanded refunds.

Towards the end of the line, near Great Eagle Centre on Harbour Road, a 30-year-old visitor surnamed Wan said he and his friends had already been queuing for about two hours, and had no idea when they would actually get inside.

“We saw a few social-distancing signs but it is difficult to enforce here,” he said, adding that organisers should have installed fans for those stuck in line.

His 34-year-old companion Kwok Yung, however, said the situation was not enough to totally dampen his excitement.

“We kind of expected long queues to happen already, as we went to the event in previous years and there’s usually many people,” he said. “We are still looking forward to it.”

But the group added that they had seen several people leaving the line who could not take the wait.

Later in the day, organisers were urging attendees to monitor their Facebook page for updates on the queues, adding: “According to past experience, the flow of people is lighter after 4:30pm. The audience may wish to consider arriving at the venue after that.” 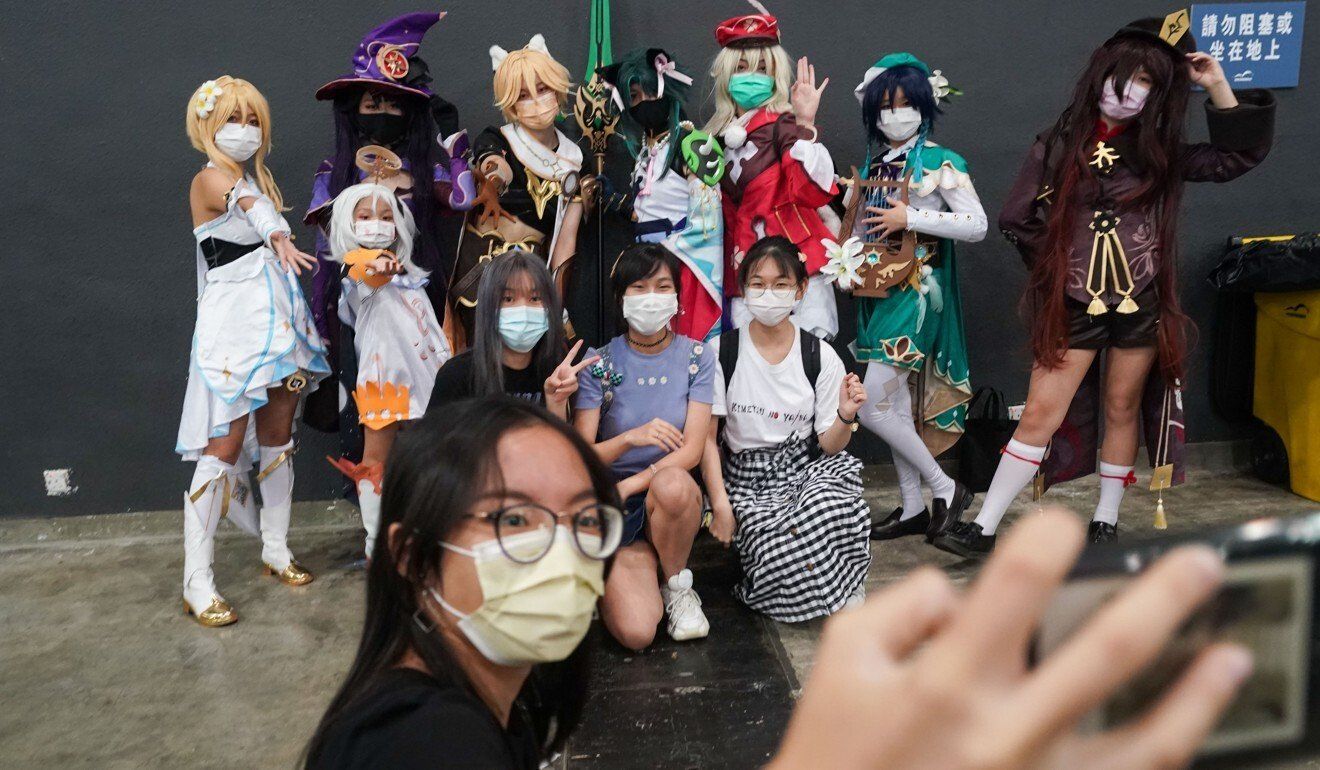 The long waits and high temperatures were not enough to dampen some attendees’ excitement.

Inside, meanwhile, the air-conditioned exhibition hall was bustling with shopping anime and comics fans.

Kwok Wai-yin, a 15-year-old student, said she had spent HK$300 (US$39) of her own savings on two figurines so far. She had queued for the event since 1pm, and only managed to enter four hours later.

“Money is tight [for me], so we are still walking around to see if some of these items are worth it,” she said.

Max Wong Hon-chung, 19, said he had already spent around HK$1,500 on toys and a small notebook inspired by the manga and anime series Death Note that cost him HK$182.

“I already went last Friday to see what’s available and then bought the items today,” he said.

“I won’t say it’s too expensive,” his friend Yuen Yuk-chun chimed in, “but the event is considered smaller compared to previous years.”

Infectious diseases expert Dr Leung Chi-chiu said even if the capacity of the venue had been lowered, the risk of the coronavirus spreading among the waiting crowds – even outdoors – remained.

The organisers, he said, “should enforce social distancing or implement further online booking” to better control the crowd.

“We will have to see in the coming week whether there are new cases spreading in the community,” he added. “If the Delta variant spreads in Hong Kong, it’s residents who will pay the price.”