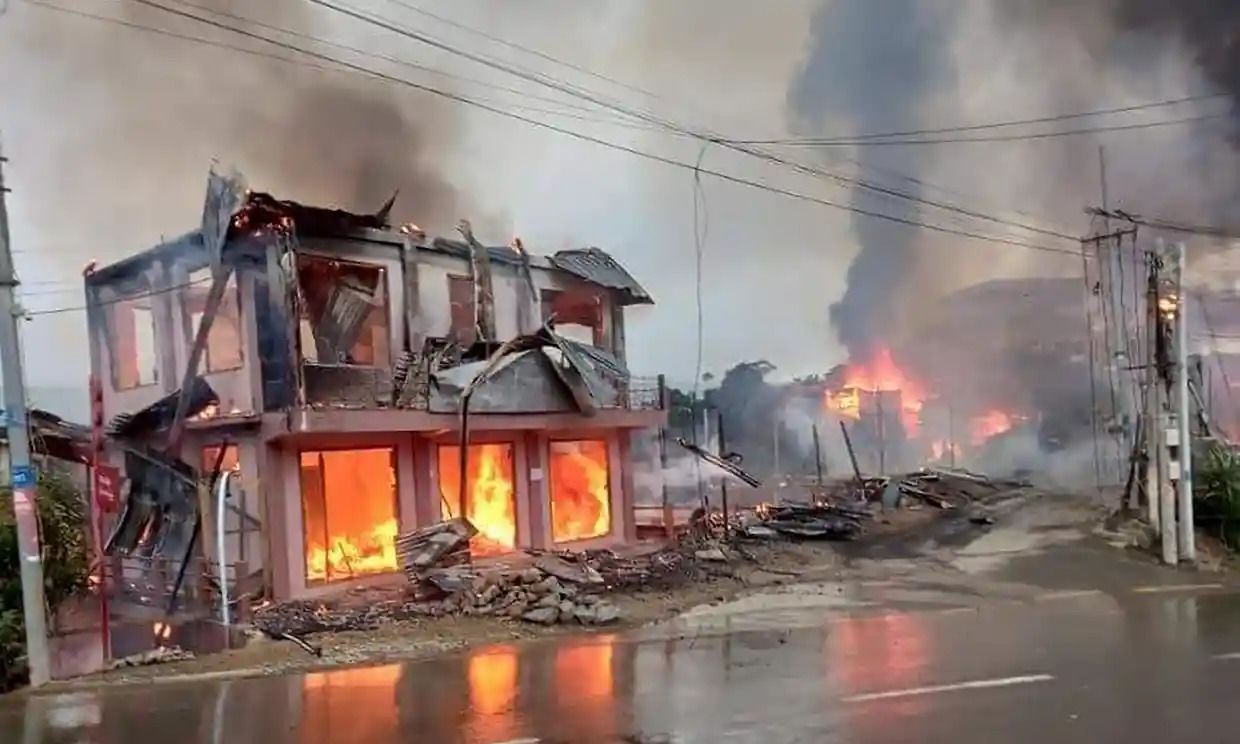 Thousands have fled a town in western Myanmar after days of fighting between anti-junta dissidents and the military, during which soldiers bombed civilian homes, according to residents and media. Residents and media say military bombed homes during days of fighting with anti-junta dissidents.
Myanmar has been in turmoil since Aung San Suu Kyi’s government was ousted by the military in February, sparking a nationwide uprising that the junta has tried to crush.

Attacks on junta troops have increased after lawmakers ousted by the generals called for a “people’s defensive war” earlier this month.

Soldiers fought battles with about 100 members of a local defence group after being “ambushed” in Thantlang in remote Chin state near the India border on 18 September, junta spokesperson Zaw Min Thun said on Tuesday. He did not give casualty figures.

Residents began to flee on Monday after soldiers “began to randomly shoot out the windows” of houses in the town, according to one local who did not want to be named.

“Almost everyone has left,” he said, adding he was sheltering in a nearby village with about 500 people, and that several hundred had already headed towards India. Thantlang has a population of about 7,500, according to the most recent census.

Another resident said she travelled for three days with her elderly parents to reach India after soldiers bombed her house and fighting escalated around the town.

“I never thought of running from my own house even after the military bombed it … but as things got worse … I finally had to flee,” she told AFP on condition of anonymity.

Residents across the border in India’s Mizoram state said about 2,000 extra refugees had arrived from Chin state since 10 September. Some said they had seen military planes dropping bombs on targets in Chin.

One inhabitant of Thingsai village told AFP through a translator that on 10 September villagers heard gunfire and bombings across the border. Another said villagers saw the military planes dropping bombs.

One refugee who had crossed over on 15 September said he rode a bike for three days to get to Mizoram. “We are very scared after the bombing. We had to flee. Two of my children stayed back to fight the military and protect our people,” the man said, declining to be named.

Videos and pictures published by media showed buildings in Thantlang they said had been destroyed by the military, and domestic animals roaming deserted streets.

Military spokesperson Zaw Min Thun said 20 homes and a government building had been destroyed in a fire after the 18 September clash, without specifying a cause.

In recent weeks, anti-junta fighters have attacked communications towers belonging to the military-owned Mytel across the country, including in Chin state.

The UN warned renewed fighting in the region was sending more people fleeing into India, where they urgently required food and shelter.

In May, government forces used artillery to flush out rebels from the town of Mindat in southern Chin state, and later cut off its water supply, according to a spokesperson for a local insurgent group.

More than 1,100 civilians have been killed and nearly 8,000 arrested since the coup, according to local observers.

The junta has defended its power grab by alleging massive fraud during elections in late 2020 which Suu Kyi’s National League for Democracy won by a landslide.
Add Comment