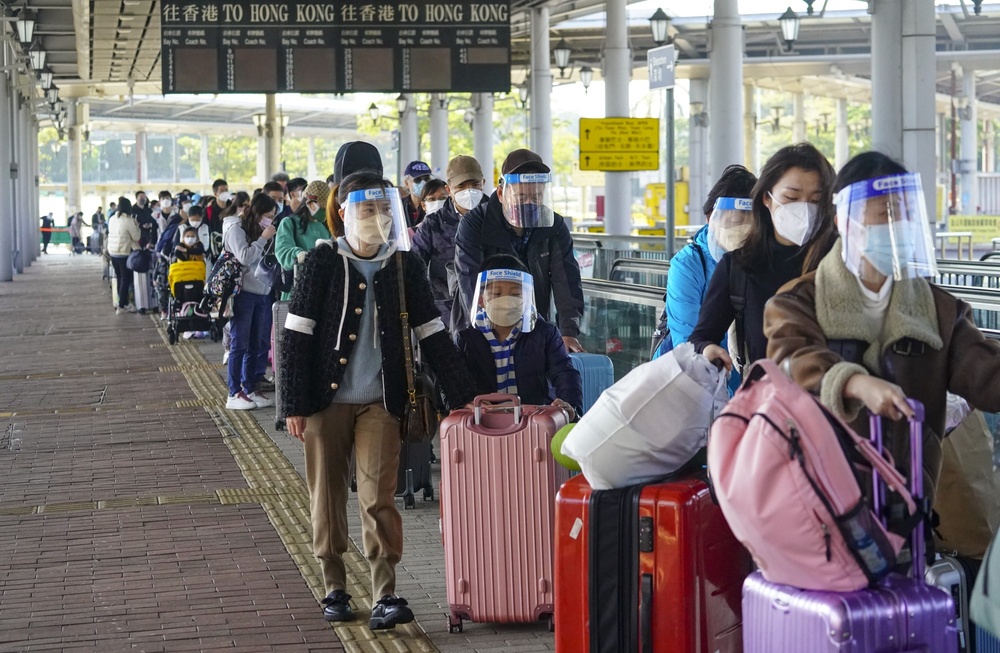 Chinese residents in Hong Kong are racing to get back to the mainland to get away from the financial hub’s worsening Covid outbreak, posing a challenge for officials fearful of contagion.
On Friday, hundreds of people queued at a border checkpoint between Hong Kong and Shenzhen, with many waiting hours to get through all checks and processes. Most have family ties with the mainland or are Chinese nationals studying or working in Hong Kong.

They join a stream of people racing to leave Hong Kong: departures via land routes -- all but one of which go directly to mainland China -- tripled to 24,697 in the first 17 days of February from a year earlier, according to Immigration Department data.

While Hong Kong’s four-digit case numbers pale in comparison to global peers, the outbreak is now the worst in China and bigger than even the crisis in Wuhan at the start of the pandemic. Health-care resources have become increasingly strained, but the recent deaths of two small children, both too young to be vaccinated, have given an additional push to the exodus to mainland China, where strict and swift anti-virus measures have always stamped out flareups quickly.

“Hong Kong only started to vaccinate children after things hit the fan, which is much slower than the rest of the world,” said Ben Chu, a 44-year-old entrepreneur who plans to leave for Shanghai, where his wife already traveled to during Lunar New Year, on Sunday. “How can we not be worried as parents?”

Chu said his 11-year-old daughter has been stuck at home for weeks after Hong Kong suspended in-person school and she’s become quieter and less sociable. He wants to take her to the mainland where she can travel domestically and visit theme parks, even though they face a 21-day quarantine.

He plans to get his daughter inoculated in the mainland, after becoming concerned that the crowds at vaccination centers in Hong Kong posed a risk to her health.

In China, it appears scant attention is being paid to Hong Kong’s explosive outbreak. President Xi Jinping this week called for Hong Kong officials to take all necessary measures in getting the outbreak under control. The unusually direct comments were entirely absent from state media on the mainland, a rare exclusion given the meticulous coverage of Xi by the Communist Party’s propaganda apparatus.

Chinese media outlets have also made little coverage of the ongoing outbreak in Hong Kong, except on the recent dispatch of medical staff and resources to the city. Hong Kong Chief Executive Carrie Lam was given some airtime on state broadcaster CCTV on Thursday evening. “We will definitely do whatever we can, with the strong support from the central government, Hong Kong people from all works of like will join efforts, we will surely succeed,” she was filmed as saying when greeting the mainland medical team at the border.

Chinese officials are also fearful of the influx of people fleeing Hong Kong bringing the virus to the mainland and have tightened measures around its southern border. All flights from Zhuhai -- which has a crossing with Hong Kong -- to Beijing have been suspended to prevent infections from spreading. Since January, Shenzhen makes arrivals from the city to 14 days of hotel quarantine plus seven days home isolation, up from a previous policy that saw a week in a hotel and a week at home.

The onerous rules are doing little to deter people. Quarantine hotel rooms in Shenzhen and Zhuhai are in such high demand that people have turned to scalpers to help make bookings, said a finance industry worker, who asked not to be identified due to privacy concerns. The person plans to return next week out of concerns that a lockdown will take away business opportunities in Hong Kong and for his child’s safety.

Others are looking to less legal means. Shanghai police are investigating a Chinese citizen who tested positive after allegedly illegally entering from Hong Kong. Authorities in cities including Zhuhai, Dongguan and Huizhou are offering cash rewards of as much as 500,000 yuan (US$79,000) to anyone who provides information about people illegally entering the mainland, which is occurring mainly by boat, state-run Yangcheng Evening News reported on Thursday, citing police circulars.
#Covid
Add Comment