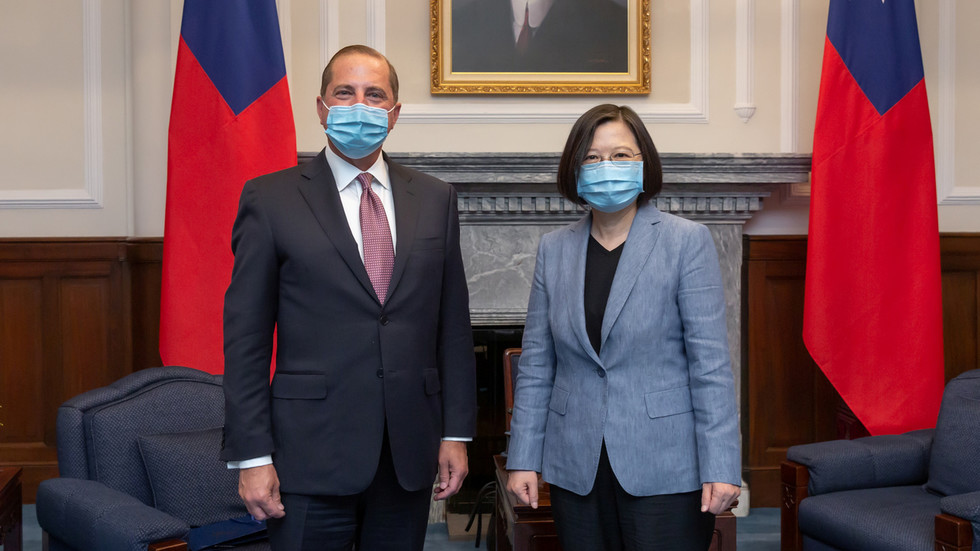 Attempts to meddle with Taiwan, which Beijing considers its territory, may cost the US dearly, the Chinese Foreign Ministry said. He advised its health chief to focus on the Covid-19 crisis at home instead of making foreign trips.

US Health Secretary Alex Azar landed in Taiwan on Sunday for a three-day trip, becoming the highest-ranking American official to visit the self-governed island, which has shown no desire in four decades to reunite with mainland China.

"On issues involving China’s core interests … the US must not harbor illusions. Those who play with fire will get burned."

The trip came amid increasing tensions between Washington and Beijing, and was used by Azar to launch another attack on China. He blamed Beijing for not warning the international community about the coronavirus, which originated in Wuhan at the end of last year, and refusing to cooperate with others in tackling the disease, thus allowing it to spread around the globe. Azar also suggested that if the initial Covid-19 outbreak had taken place in Taiwan or the US, it could’ve been “snuffed out easily.”

The Chinese spokesman denied US claims of poor handling of Covid-19 and expressed surprise that the US Health Secretary had decided to leave his country when the coronavirus is “out of control” there. The US has the worst situation with Covid-19 in the world, having already registered more than five million cases and over 164,000 deaths.

"He ignored millions of Americans suffering from the virus and went to Taiwan to put on a political show."

Azar’s “behavior proves once again that, in the eyes of US politicians, American lives mean nothing when compared with their selfish political gains,” Zhao added.

Despite severing official ties with Taiwan in favor of China back in 1979, the US actively backs the island’s push for independence and remains its biggest arms supplier.

Only last month, the State Department approved a $620 million package to upgrade Taiwan’s Patriot surface-to-air missiles system, to which Beijing reacted by saying that it will impose sanctions on one of the main contractors in the project, US weapons maker Lockheed Martin.

Beijing has demanded on numerous occasions that arms deliveries to Taiwan be stopped, pointing out that they violate the ‘One China’ principle and further deteriorate bilateral relations with Washington.