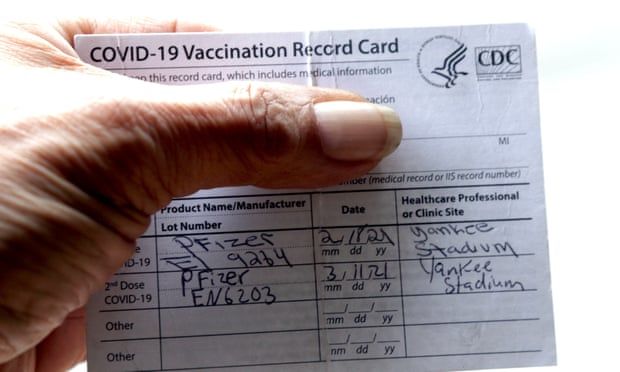 ‘They tell you what you want to hear’: people buying fake vaccine cards get scammed themselves

The Covid vaccine is free, but some people have tried to illegally obtain fake vaccine cards only to get scammed, by other criminals
For $350, a Telegram user called NoVac Team offered to sell a Guardian reporter a fake vaccine card. The price, they said, would include having the reporter’s vaccinated status registered in the Centers for Disease Control (CDC) database which is connected to their health records.

The CDC does not in fact maintain any vaccination records, nor does it provide a CDC-labeled vaccination record card for people. NoVac Team is a scammer, one of many on the messaging service Telegram who are offering fake vaccine cards to anti-vaxxers and then taking their money.

The hidden market for fake vaccine cards has been growing as more states start to enforce vaccine mandates for public gatherings, and employers require proof of vaccination.

Google searches for the term “fake vaccination cards” have also been rising as 4 January 2022, the date on which the national vaccine mandate affecting 83 million workers comes into effect, gets closer.

But many of the people offering fake cards are themselves scammers who will take the money for a forged card and then disappear. The Guardian has identified seven sellers that were repeatedly flagged by a Telegram scammer warning group that seeks to alert people who might be looking to buy a fake vaccine card.

Home Boy, who is based in Cameroon, sells cards for $170 and claims he delivers within 48 hours. He said he had worked with more than 250 people in the past three months. When asked about rumors about rampant scams on the platform, he shares “proof” of vaccine cards he has made. “If we have to work together we have to start by building trust,” he said.

For $149, a user called “Admin 24/24”, based in Australia, said they could provide a digital vaccine pass “for every country”.

Another scammer going by the name of “Stella Bright” promised to send QR codes provided by doctors who “work with the government but are ready to save the world”. When asked if this was a scam, she said: “We are part of those fighting fraudsters on Telegram and doing the right job. In a period of hardship like this one, we need heroes out there who can protect humans again since our government has failed us all.”

Getting the vaccine is free, straightforward and safe but some people have instead chosen to spend weeks trying to illegally obtain fake vaccine cards only to get scammed, by other criminals, for hundreds of dollars.

It took Maggie two tries and $450 before she realized she wasn’t going to get the fake vaccine cards she was looking to buy.

The first seller that Maggie identified turned out to be a fraud. “The second time I was less trusting but still wanted to believe there was a way,” she said. “I fell for it again. I was so mad.”

The second seller sent her a strange message after receiving her initial payment. “I’ll need a little more payment to complete your registration,” they said. “We need to pay for a certain situation.”

Maggie told the seller she had no more money. A single mother, she had borrowed $350 to make the initial payment. Thinking that she might be getting scammed again, she pulled the plug.

“I don’t trust any of them anymore. I haven’t come across even one other person [trying to buy a fake vaccine card] who has found someone legit,” Maggie told the Guardian. “The people who say they have – are usually in cahoots with the scammer or it’s a scammer’s alternate account.”

While Maggie herself is fully vaccinated, something she says was “bullied” into, she has been looking for the card for her teenage daughter, who is an actor. Her daughter, she said, has been “treated like she has leprosy” in Hollywood because she doesn’t have the vaccine, and is losing jobs and access to her acting classes and agents.

She found numerous groups on Telegram, with sellers offering fake cards for, as one puts it, “those who need results but not willing to take the vaccines”.

“They tell you whatever you want to hear to get your money,” she said.

Maggie believes almost everyone on the app are fraudsters. “That’s why I decided to make a group warning people,” she added. “I knew if I was in my situation and fell for it, people much more desperate and in worse situations than me were falling for it too.” Maggie’s group is now one of the first someone would see if they were looking for fake cards on the app.

One user in the Telegram scam alert group said she lost more than $350 to a person who posed as a seller on Facebook. The user said they were desperate to buy a card to be able to see their family. “It takes me three days to make that much money,” they wrote.

Sara, who is based in Australia, has been scammed by five people and lost more than $1,000. She had coronavirus in March and told the Guardian she believes she has enough immunity from the experience and so doesn’t need the vaccine.

In many states, the cards are low-tech paper slips that could, theoretically, be forged easily. Maggie said she couldn’t just photocopy one because she didn’t know anyone who had a blank card that she could copy.

She said the sellers often promise a deal that includes entering the buyer’s vaccine record on the Health and Human Services database in the event that doctors need access to that record, although, again, such a database doesn’t exist.

Some users claim they have reported the users on Telegram, but there appears to be minimal intervention from the app. Some of the accounts flagged as scams within Maggie’s group disappeared a few days later. But others, like those mentioned above, remain active.

Telegram’s community guidelines strictly prohibit scams, but it’s not clear what kind of action is taken against them. The Guardian contacted Telegram but did not receive a response.

In a statement to the Guardian, PayPal, which a lot of the scammers used to request money, said they don’t permit sales of Covid-19 vaccine cards and have a “zero-tolerance policy” about such activities.

“We thoroughly investigate fraudulent activity to ensure our services are used in line with our acceptable use policy and adherence to local applicable laws,” they said. They did not respond to queries about how they vet such transactions.

At least some people are receiving fake cards. In September, 15 people in New Jersey and New York were arrested, including two women selling hundreds of fake cards for $200 and thirteen buyers. The New Jersey woman, who was known as AntiVaxMomma on Instagram, offered both a physical copy as well as an entry into the fictional online database for an additional $250.

While some of the cards are coming from outside the US, produced by international counterfeiters, there are many other ways to fake a card. A police officer and a colleague in Lancaster, Pennsylvania, were fired for using blank cards they had acquired from a cousin in the military.

Maggie and Sara have both said they are resigned to the possibility that they might never get a card.

“I think there may have been ways to get them at some point (early on),” said Maggie, “but after the mandates and threats of jail … I think it’s probably only scammers at this point.”

Neither suggested their inability to cheat the system would push them towards getting themselves or their family members vaccinated.