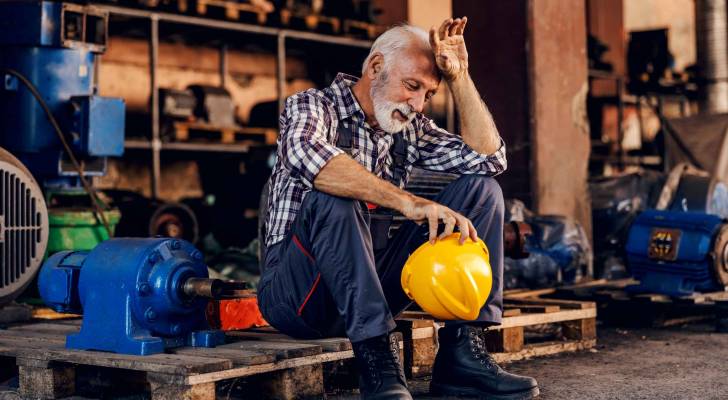 'There is no more retirement': Runaway prices are pushing seniors back to work as the future of Social Security remains 'under threat'

“Unretirement,” or the act of going back to work after retiring, isn’t just for young Buccs like Tom Brady.

Recent data shows about 3.2% of workers who were retired a year ago have rejoined the workforce — about 1.7 million people.

That means the number of retirees heading back into the labor force is returning to pre-pandemic levels, says a spring report from the Indeed Hiring Lab.

Yet John Tarnoff, a reinvention career coach based in L.A., says unretirement has been an underreported phenomenon for years.

“The costs of living were going up even before the current inflationary cycle that we're in now — costs were rising, fixed incomes were no longer good for people, Social Security as an institution is under threat,” says Tarnoff.

*  Want to invest your spare change but don't know where to start? There's an app for that

*  You could be the landlord of Walmart, Whole Foods and Kroger (and collect fat grocery store-anchored income every quarter)

Social Security's reserve funds expected to run out by 2034. After the fund’s reserves are exhausted, you’ll receive about 77% of your benefits instead which would be drawn from tax revenue.

So where does that leave retirees who rely on Social Security for a big portion of their income? For many, the answer might be back at work.

What is driving retired workers back to the labor force?

Spencer Betts — a certified financial planner and chief compliance officer with Bickling Financial Services in Lexington, Massachusetts — says some retirees could be heading back to work due to high job vacancies and wage increases.

Older workers may also feel safer now than they did during the peak of the pandemic, especially if they’re fully vaccinated.

St. Louis Federal Reserve economist Miguel Faria-e-Castro reported over 2.5 million excess retirements due to COVID-19 as of August 2021. Many of these individuals could be heading back to work now that opportunities are available and money is tight.

“Retirement is a misnomer — there is no more retirement,” says Tarnoff. “I think that older workers are going to be caught in a tight squeeze, because they don't have the income overall to keep up with inflation.”

Social Security benefits recently got the biggest cost-of-living adjustment (COLA) in decades after a year of scorching inflation. And experts warn that the increase combined with a continued ecnomic downturn could speed up the Social Security Trust Fund's insolvency date.

“We won’t know the bottom line until we learn what inflation will be in 2023,” Mary Johnson, Social Security and Medicare policy analyst at advocacy group The Senior Citizens League says.

He adds that plenty of older workers may have been pushed out of the workforce during pandemic-related layoffs but didn’t voluntarily choose to retire.

The mean income for households where at least one person is 65 years old or older was at just over $44,000 in 2017, according to the most recent data available from the U.S. Census Bureau. Social Security typically makes up the highest proportion of that income, at $16,560, and then earnings at $13,950.

Betts notes that plenty of older workers may still opt for part-time work once they hit retirement age.

A retiree heading back into the workforce isn’t necessarily going to obtain the same job and salary range that they had before they retired. If you’re looking to come out of retirement, you need to watch out for the potential tax implications that a higher income brings in.

Betts provides an example of a retiree with a consulting gig, which often means filing a 1099 form — a tax form for individuals earning money from a person or entity who is not their employer.

“You might get the same amount of salary. But you're now responsible for both sides of the Social Security tax. So that's naturally like a 9% reduction in your pay.”

Workers who have tapped into their Social Security benefits pay 6.2% on their earnings up to $147,000 — while those who are self-employed face a 12.4% cut that can be offset by income tax provisions.

Your age and at what point you start receiving your benefits can also affect how much Social Security you’re receiving. The full retirement age for those born in 1943 through 1954 is 66, and then gradually increases each year until you hit 67 for those born in 1960 or later.

If you’re below full retirement age, you can make up to $19,560 and receive all your benefits. “If you make more than that, then for every $2 over that number, you gotta give $1 of your Social Security back,” says Betts.

In the year you reach your retirement age, you can make up to $51,960 to receive your full benefits. For every $3 over the limit, $1 will be withheld.

Depending on where you live and how high your state income tax rate is, almost half of your earnings can go to the tax man, adds Betts. “So make sure you don't price yourself too low.”

What else should you know when applying to jobs?

Betts says that if you have the ability to bring in more income, it’s usually going to be a net positive in the long-term.

“They're probably taking less out of their investments, they're able to save more,” he explains. “Maybe they can put a lot of that towards future retirements, towards an IRA or investment account, or paying down debt more quickly.”

When applying for a job, Tarnoff says the most important thing is to focus on your value as an employee — and consider adding new skills to your repertoire as well.

“It's vital that older workers dive in and roll up their sleeves along with everybody else. There is no reason why an older worker can't learn the same remote work skills and technology skills as a younger worker.”

Cleaning up your LinkedIn page and networking is crucial. Tarnoff also recommends zeroing in on the opportunities that best suit your skills and experience, instead of applying haphazardly to hundreds of job postings.

Brad 99 days ago
Social security articles from the government always trying to mislead the people on how social security really works.
When you retire at a specific age 62 65 66 67 or 70 the government could straight up tell you exactly what happens at each age group but they leave out details that benefit senior citizens.

What people really need to do as I did go research social security laws and rules you will save yourselves a lot of grief because the government is designed to lie to seniors what they really can get.