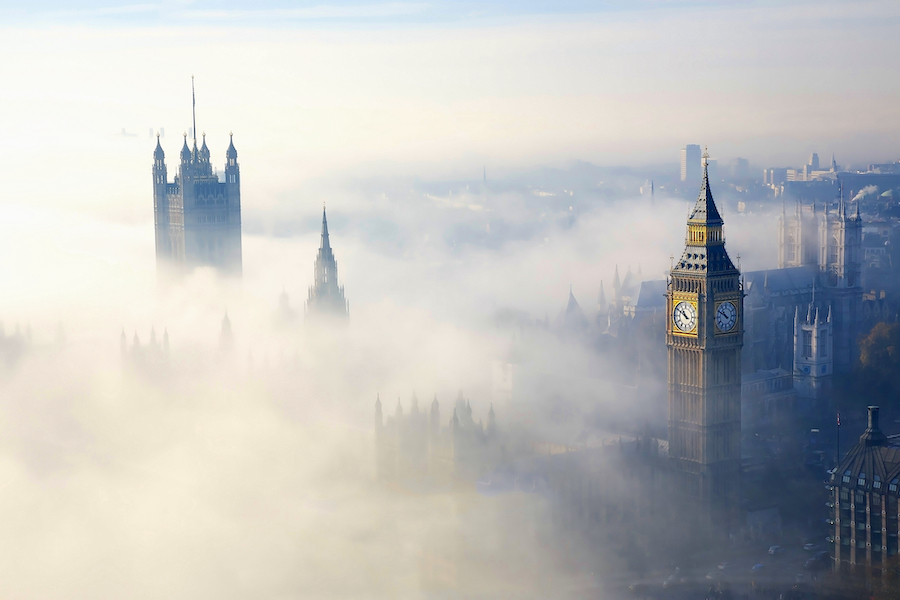 The UK is losing the fight on money laundering, but we can still win - if we want

At the end of 2018, a softly spoken British executive matter-of-factly told the European Parliament how to clean tens of billions of dirty dollars. Howard Wilkinson’s voice shook slightly as he described to MEPs how money from the former Soviet Union was flushed through Danske Bank, where he once worked, into the international financial system.

It had been Wilkinson who first blew the whistle on what was happening at the Danish institution, particularly its Estonian subsidiary. Investigators now believe some $200bn was funnelled through the accounts of Danske Bank’s customers. It may have been the biggest money-laundering machine ever uncovered.

These schemes work by banks transferring funds on behalf of shell companies with anonymous or opaque ownership. At the European Parliament, Wilkinson used a PowerPoint demonstration to stress that dirty money went through banks in Russia, Denmark, Lithuania, Estonia and the United States, as well as the Russian subsidiary of a European bank and the European subsidiary of a US bank.

But money laundering, Wilkinson suggested, is not only about banks. “In my view, just as important and just as culpable are the countries where there are shell companies implicated in the schemes,” he said, before citing the role played by a kind of Danish entity called the kommanditselskab (or k/s) in facilitating suspicious transactions through Danske Bank.

Then he raised his voice. “Clearly, the worst of all is the United Kingdom,” he told MEPs.

“One does not have to be polite about one’s own country. The role of the United Kingdom is an absolute disgrace. Limited liability partnerships and Scottish limited partnerships have been abused for absolutely years.

Wilkinson, described by his lawyer Stephen Kohn as “an international hero”, was speaking on 21 November 2018.

To a muted and cautious welcome from anti-corruption campaigners, the UK government promised reforms. Two and a half years later, the administration of Boris Johnson has still to deliver these, though it says it will do so.

In brief, under-mooted rules, limited partnerships would have to show some connection to the UK, even if this is just to have an agent subject to a British anti-money laundering supervisory body, and also provide more info about their partners to their registrars.

So far, say campaigners, so good.

Yet questions remain about whether the UK government’s proposals – alongside further reforms to Companies House, the UK corporate registry, announced more recently – would do much to stop the kinds of abuse that Wilkinson discovered. Are tougher legislative measures required? Or are there wider problems with the UK’s soft-touch, laissez-faire system of corporate regulation? Or even with the country’s business and professional ethics?

Elspeth Berry, an associate professor of law at Nottingham Trent University, has been thinking about these issues for a long time. Now she has published a landmark paper, in the European Business Law Review, on how to change the story of British partnerships of one kind or another.

For anyone worried about dark or dirty money in the UK, Berry’s work merits further attention. Because she does not just address technical issues of legislation and regulation, she looks at the very values that underpin them and their enforcement.

For Berry, the UK government’s proposals are “welcome as a starting point”, but “inadequate in substance”. First, she argues, these proposals ignore LLPs and focus too much on SLPs, the Scottish shell firms once dubbed Britain’s “home-grown secrecy vehicle” by the anti-corruption NGO Transparency International.

That means, she warns, that dirty business carried out using SLPs may well just move to other UK entities.

As openDemocracy has reported, there have been substantial problems with limited partnerships. A Welsh ‘zombie’ LP, which could not legally own property, has been revealed as the owner of a tanker that ran aground off the Ukrainian Black Sea port of Odesa, causing an environmental disaster.

An anonymously owned Northern Ireland LP, another ‘zombie’ entity, lobbied on behalf of former Ukrainian premier Yulia Tymoshenko. And a SLP was banned from bidding for World Bank aid work after a “fraud” scandal in Uzbekistan. But LLPs have also been used as anonymity vehicles in the former Soviet Union, such as in the giant Tashkent City development in Uzbekistan’s capital.

Bluntly, shell firms are not just used to squirrel money out of former Soviet states. They are used to hide wealth and power inside the region too.

Berry is not impressed by the UK’s lack of action on LLPs. “Although the consultation by the Department for Business, Energy and Industrial Strategy on LPs arose from concerns about LPs, particularly SLPs, LLPs have been implicated in many of the same activities and it is unfortunate that the consultation and subsequent government proposals largely ignore them,” she says.

“The focus on SLPs has sometimes reduced scrutiny of other LPs and of LLPs. As a result, those using SLPs for illegal purposes may simply migrate to other parts of the UK and those using LPs might simply convert to LLPs.”

Berry picks out one example of bypassing concerns about LPs other than Scottish ones: beneficial ownership declarations.

In the UK, companies, LLPs and, since 2017, SLPs have to name “persons of significant control” or PSCs. Within a year, this rule helped The Herald newspaper in Scotland reveal that two out of five SLPs that made such a declaration revealed they were owned in the ex-USSR.

However, these requirements, says Berry, are “ineffective”.

“Although the extension of the PSC requirements to such partnerships resulted in a reduction of 80% in the number of SLPs being registered, this was associated with an increase in the number of English, Welsh and Northern Irish LPs, suggesting that the problem of opacity has not diminished, but merely migrated to other vehicles,” she says.

The whole PSC regime has other practical problems, writes Berry, including the fact that the PSC register is not verified, or that Companies House struggles to distinguish between people of the same name: there are a lot of business owners called John Smith or Ivan Kuznetsov in the world.

The UK government, as part of its proposed reform of Companies House, says it wants certain types of person, such as company directors, to have a single verified account with the UK corporate registry. But this does not apply, Berry stresses, to limited partners.

British authorities have been criticised in the past for playing a sort of slow-motion whack-a-mole with problems generated by shell firm abuse. A good example: making SLPs file PSCs after a series of scandals exposed their abuse in criminal and unethical schemes.

Berry suggests a more comprehensive overhaul, including close regulation of how such off-the-shelf businesses are created in the first place. There are businesses whose business it is to register other businesses. These are called Trust and Company Service Providers (TCSPs).

Partnerships implicated in many of the big money-laundering or crime cases of recent years usually started life as such an enterprise. Trust and Company Service Providers, for example, created three-quarters of all SLPs in the UK. Many shell firms still have connections to their TCSP, which will handle things such as forwarding mail from a virtual office or PO Box used as a registered address.

In theory, the UK’s tax service, the HMRC, regulates Trust and Company Service Providers. In practice, Berry suggests, the watchdog does not bite.

Berry adds: “The UK government’s national risk assessment of money laundering in 2017 noted ‘negligent or complicit’ Trust and Company Service Providers facilitating money laundering, abuse of structures set up by them, and inconsistencies in TCSP supervision.

“HMRC, which is [the government’s] default supervisory authority, has insufficient resources to properly enforce the legislation and offers none of the additional assistance offered by other regulators.”

Berry wants a proper watchdog for the UK’s Trust and Company Service Providers – or at the very least proper funding for HMRC to do the job. And she wants Companies House to be resourced to police its register.

“However, this alone is not enough,” she says. “The national risk assessment suggested that professionals, including lawyers and accountants, pose equal – and in the case of accountants, greater – risks of money laundering than other Trust and Company Service Providers, while the Solicitors Regulation Authority has acknowledged that AML training ‘does not achieve its goal of helping lawyers to identify and prevent money laundering’.”

Britain’s white-collar professionals would wince at the thought that they are enablers of global corruption. But some of them clearly are. Berry asks if regulation and legislation alone can stop abuse of shell firms – or does the UK need a cultural change, an ethical overhaul?

“Ultimately, failings in anti-money laundering oversight are symptomatic of a wider problem with financial regulation in the UK. Emphasis on the language of ‘compliance’ rather than ‘crime’ undermines the moral role of the criminal law in relation to both AML and tax evasion, and legal professional privilege has been asserted to protect against investigations into wrongdoing.”

Berry cited members of the House of Lords who said that pursuing “‘market-friendly’ and internationally competitive financial service regulation inevitably results in ‘the least-regulated structure’ and ‘a race to the bottom’”.

This “race to the bottom”, she argues, is also related to Britain’s “unwillingness” to act against tax and secrecy havens still under UK control, including overseas territories or crown dependencies, such as the British Virgin Islands, Cayman Islands or Jersey.

Has the financial services sector weakened Britain’s response to shell firm abuse? Partnerships, for example, are widely used as tax-efficient structures for private equity funds and other legal financial products.

“It is not clear to what extent this inadequacy reflects a government deregulation agenda based on extensive lobbying by the financial services industry,” Berry said, writing of what she sees as a weak UK response to shell firm abuse.