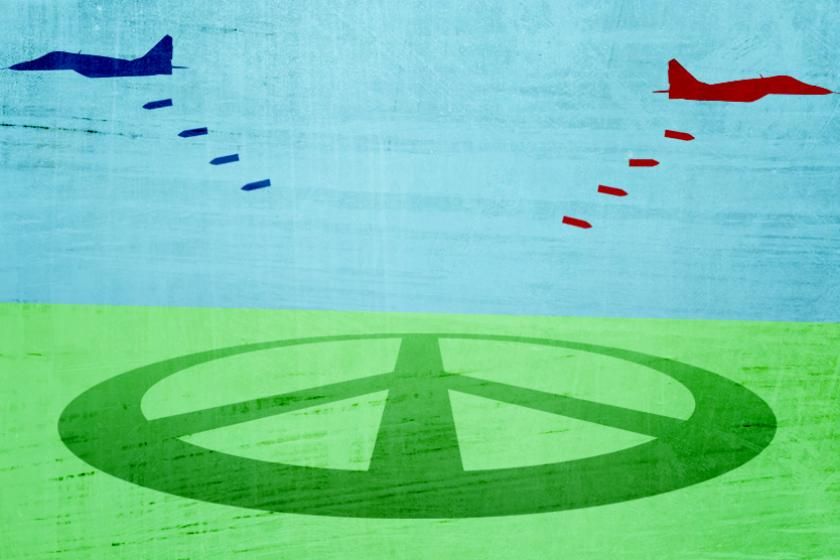 The U.S. anti-war wing of both parties is dead

These alignments highlight an increasingly undeniable fact of American politics in 2020: The anti-war wing of both major parties is dead. Your presidential choice is between war and war. There's no faction of Republicans or Democrats which combines real power with a durable, principled interest in turning American foreign policy away from global empire.

That's not to say no one in major-party politics diverges from Washington's standard-issue military interventionism. There's Sen. Rand Paul (R-Ky.) challenging Trump administration officials in Senate hearings and seeking to counter Trump's more hawkish influences on the links. Sen. Mike Lee (R-Utah) has pushed for the U.S. to exit Yemen's civil war and has slammed the administration's January dalliance with executive warfare against Iran. Sen. Tim Kaine (D-Va.) tries every year to rein in abuses of the 2002 Authorization for Use of Military Force in Iraq, and Rep. Barbara Lee (D-Calif.) has spent decades in lonely opposition to military adventurism. As a Democratic presidential candidate this past year, Sen. Bernie Sanders (I-Vt.) was more interested in peace than the party establishment which has now twice rejected him as their standard-bearer.

I don't mean to discount the good work of these and other comparatively anti-war legislators. It is not without effect. There's some evidence, for example, that Paul steered Trump toward decreasing the U.S. military footprint in Syria. But neither should their ability to retain office confuse us into thinking they have more control over American foreign policy than they do.

The reality is these officials and anyone who agrees with them have little meaningful power on this issue — occasional influence, perhaps, but certainly not power than can be reliably wielded. Paul's golf course chats with Trump may eke a win from time to time, but this is a lucky backchannel that can be dammed at any moment. It has no formal, institutional authority. This week's handwringing at Foreign Policy about the supposed ascendancy of "isolationism" on left and right alike is absurd, the foreign policy version of Tucker Carlson's bizarre claim of libertarian dominance of Washington. The main voices advocating greater restraint in American foreign affairs are not isolationist, and though they kick up quite a ruckus, they have little to no say over actual policy direction. How can anyone look at half a dozen wars and think we have an isolationism problem?

The Trump vs. Biden race only underlines this state of affairs. Neither will give us a foreign policy that can even plausibly be caricatured as isolationism, Trump's inane protectionism notwithstanding.

The president pays occasional lip service to ending "endless wars" and prioritizing diplomacy ("the greatest deals," in his parlance), but his better impulses are constantly overcome by his selfishness, short attention span, stupid militarism, and choice of counsel like Secretary of State Mike Pompeo. Trump has brought us closer to open conflict with China, squandered his chance for productive negotiations with North Korea, exacerbated tensions with Iran, and repeatedly recommitted to enabling Saudi war crimes. What few good foreign policy ideas he hits upon are almost always happenstance byproducts of service to his own political fortunes. He has yet to end a single war.

Biden and his running mate, Kamala Harris, are more conventional liberal interventionists than Trump, but the crucial assumption of intervention is same. There are a few points for war critics to like here, including Biden's vehement opposition to the Obama-era surge in Afghanistan, Harris's objection to U.S. involvement in Yemen, and their plan to rejoin the Iran nuclear deal. Biden pledges he'll "end the forever wars in Afghanistan and the Middle East," but, like Trump, lacks a specific plan to do so. Biden has no apparent interest in Pentagon cuts, has hired some markedly hawkish advisers (are all those neocons going to stick around, too?), and is trying to out-hawk Trump on China. Certainly with Biden we can expect more multilateral diplomacy and fewer reckless tweets, but there's little reason to think he'll break the broader foreign policy patterns of the past 20 years.

From a purely political perspective, what's curious about all this is the mutual foregoing of potential electoral gain. Restraint rhetoric is consistently popular — our last three presidents all campaigned on it to some degree — and public opinion is on a years-long trend toward wanting a smaller U.S. military role abroad, one more tailored to defending U.S. interests, narrowly conceived. You'd think one party or the other would espy an opportunity here.

Or perhaps both already have. Each candidate has duly recited his lines about ending endless wars and can truthfully point to his opponent's failure to do likewise. And whoever takes office in January can continue exactly that failure, probably without much political consequence. He can deplore his bombs and drop them too. Americans will remain preoccupied with more immediate domestic concerns; Washington will stay stuck in its interventionist consensus; and those endless wars will live up to their name.
#Joe Biden
Add Comment