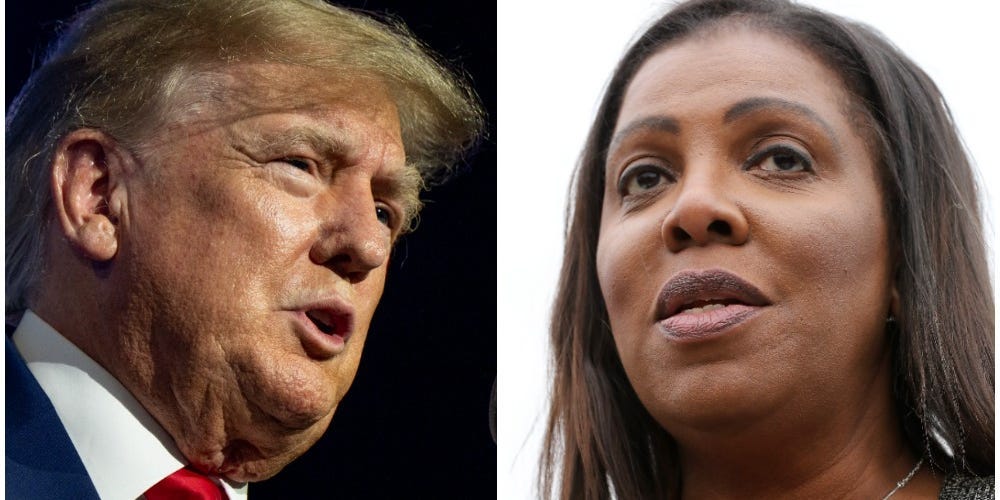 The Trump Organization got an unwanted sidekick courtesy of a Manhattan judge: a court-ordered watchdog

A Manhattan judge blamed Trump's "demonstrated propensity to engage in persistent fraud" for the ruling.

In a major legal blow to former President Donald Trump and his real-estate empire, a Manhattan judge has ordered the Trump Organization to submit to a court-appointed, independent monitor.

Attorney General Letitia James had requested the intervention as part of her $250 million fraud lawsuit against the former president, his family, and his business.

Trump quickly derided the decision, calling Engoron, "a puppet judge of the New York Attorney General and other sworn enemies of President Trump."

He added, "It is Communism come to our shores."

The fiscal leash on Trump that James asked for, and that Engoron approved Thursday, is a tight one.

As another part of the ruling, Trump cannot now sell, transfer or otherwise move or dispose of any of his properties "without first providing 14 days written notice" to the judge and the attorney general's office.

The attorney general must recommend three potential monitors to the judge by November 12. Trump's side would be allowed three days to challenge the choice, but the final decision on who the monitor would be will rest with the judge.

The monitor will ensure that no property transactions or company restructuring occurs without the attorney general's office getting notice. The watchdog also must be given access to any company data he or she needs "to assess the accuracy of any representation" Trump makes in future financial filings, the ruling said.

The oversight would likely stay in place for the year or so it takes for James' lawsuit to be decided by Engoron in a non-jury trial. The attorney general has asked for an October 2023 trial date.

Trump's lawyers had fought hard in court papers and in oral arguments Thursday against any monitoring, which James demanded due to what she described as the company's ongoing fraud.

In arguments before the judge hours before the ruling, Trump attorney Christopher Kise called the idea of monitoring "drastic" and likened it to "nationalizing" the company.

The ruling was made by the same judge who held Trump in contempt over the summer — and fined him $110,000 — for failing to fully comply with James' subpoenas for his personal business documents during the investigation that led to September's lawsuit.

The ruling is a victory for James, who had requested Trump's business — which is headquarted in the state — be monitored due to what her office has described as an ongoing pattern of fraud.

"Today's decision will ensure that Donald Trump and his companies cannot continue the extensive fraud that we uncovered and will require the appointment of an independent monitor to oversee compliance at the Trump Organization," James responded to the ruling in a press statement.

"No number of lawsuits, delay tactics, or threats will stop our pursuit of justice."

It's the first substantial legal battle in the $250 million fraud lawsuit James filed in September to essentially drive Trump and his company out of New York.

James alleges in the suit that for more than a decade, Trump repeatedly and fraudulently inflated or deflated the assessed values of his properties as it suited him, in order to secure tax refunds and favorable terms from lenders.

Trump has insisted personally and through his lawyers that James is pursuing him and his company as part of a "witch hunt" and political vendetta. James, a Democrat, campaigned for attorney general in 2018 on a promise to hold Trump accountable.

In Thursday's 11-page ruling, Engoron credited the attorney general's lawsuit with having made a "compelling" case for fraud.

Some examples from the lawsuit were "particularly compelling" in demonstrating financial wrongdoing, he wrote.

"Mr. Trump further used this extreme exaggeration to inflate wildly the value of the Triplex" on financial documents he used to secure favorable terms for bank loans, the judge wrote.

Trump claimed on 2011 financial documents that the triplex was worth $80 million, the judge noted, referring to the attorney general's evidence.

By 2012, Trump's stated value of the apartment had inexplicably shot up to $180 million even though, as of that year, "the highest price ever paid for an apartment in New York City was $88 million, nearly $100 million less than Mr. Trump's valuation of his Triplex."

Trump, Engoron suggested in his ruling, is far too smart a businessman to have accidentally tripled the square footage of his own apartment in his own building, and then repeated the error for years.

As one of the lead prosecutors, Kevin Wallace, told Engoron before the decision, "Our case is pretty clear. If you claim an apartment is 30,000 square feet and it's not 30,000 square feet, that's lying and that's fraud."

Or, as the judge put it in a footnote on page six of his ruling: "It belies all common sense to assert that Mr. Trump, who resided in the Triplex for over 35 years and who purports to be 'one of the top business people' was not aware that he that he was over-representing the size of his home by nearly 200%."

In arguing against the imposition of a monitor, Trump's side had said that James' entire lawsuit is flawed, in part because its only alleged victims are big banks and insurers who'd willingly accepted his math in return for his business without public complaint.

Kise responded to the ruling in a press statement.

"This unprecedented order effectively seizes control of the financial affairs of a highly successful private corporate empire based on nothing more than gross exaggeration of standard valuation differences common in complex real estate financing transactions," the statement said.

The statement did not explain how such "valuation differences" as the tripled triplex square footage could be "common" in real estate industry.

"This is just more political persecution by Letitia James," said Erica Knight, a spokesperson for the Trump Organization, calling it a "snap opinion" issued "just hours before AG James is scheduled to attend a rally alongside Hillary Clinton and Kamala Harris.

"Today's decision sets a dangerous precedent for government interference in private enterprise and is an obvious attempt to influence the outcome of the upcoming election," Knight wrote in a press statement.