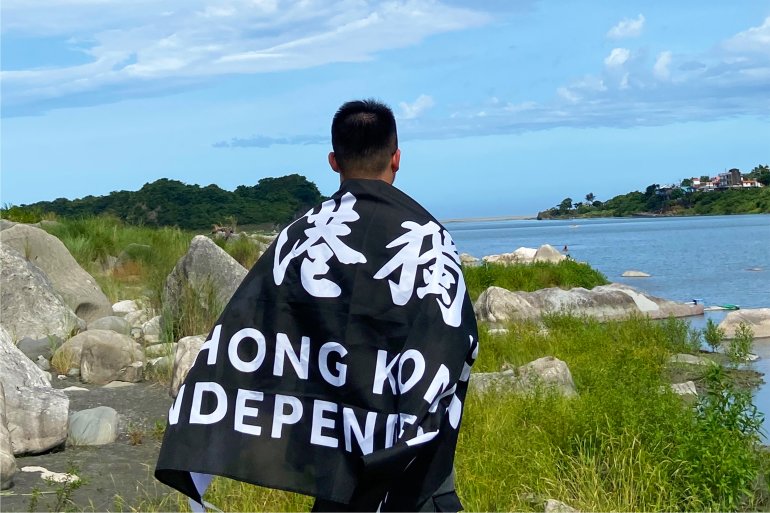 For Hong Kong activists now in exile, a year of dissent and despair has left emotional wounds they will carry for years.

The night was once Ted’s* greatest enemy.

For months, after fleeing to Taiwan from the front lines of the Hong Kong protests, Ted was haunted by a recurring nightmare. He dreamed that he was trapped inside a glowing ring. Beside him, his fellow protesters were being beaten, tortured and raped by the police, but he was unable to move. Unable to help, he could only watch.

Ted would wake up yelling from his little bunk bed in Taipei, and find himself covered in a cold sweat; alone and safe.

The 22 year old is among roughly 200 people the Taiwan Association for Human Rights estimates have fled Hong Kong for the island after participating in the pro-democracy protests, which began in June last year amid mass opposition to a bill that would have allowed suspects to be sent to mainland China for trial.

Fearing lawsuits and political prosecution, many of the exiles – mostly in their teens or early 20s – left in a hurry. But while they are supported by a network of lawyers, civil society organisations and donors who want to help them build a new life, the psychological wounds from months of protests – some of which turned violent – are still fresh.

“The guilt of leaving the movement and their loved ones behind also lingers in many protesters’ minds,” said Wu Cheng, Executive Director and Spokesperson of Taiwanese Civil Aid to HKers (TAHK), an NGO providing assistance to people from Hong Kong who have left the city because of the political crisis.

Ted fled the territory in July last year, after he and a group of protesters armed with sticks and metal railings stormed and defaced the city’s legislature. 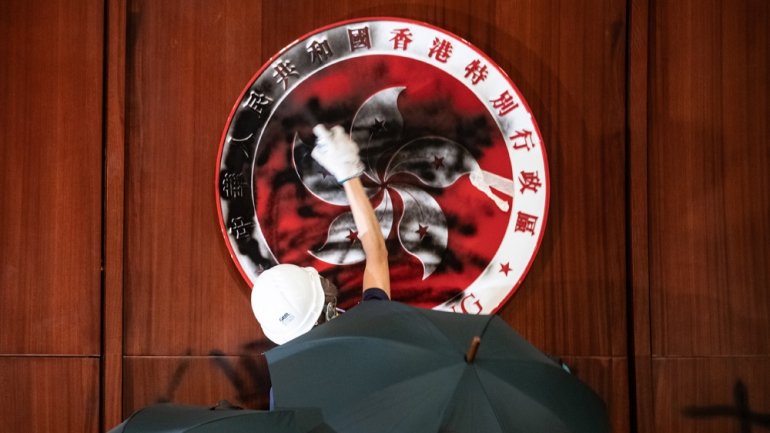 It was shortly after millions had marched against the now-withdrawn extradition bill but with peaceful demonstrations failing to prompt concessions from the government, Ted and his fellow protesters felt they had no choice but to take more radical action.

That night, as the small group escaped the building, Ted was hit by two bean bag rounds. He went back home bleeding from his foot and was concerned to discover his photo was all over the media.

A week later he boarded a flight to Taiwan. Soon after, the police raided his apartment.

For months, while Ted has lived, physically, in Taipei, his spirit has roamed Hong Kong’s parallel time and space. He often stares with concern at hours-long live broadcasts from the territory on his phone, with the scenes replaying again and again in his head.

He also has flashbacks of the days he spent on the front line – the sound of metal railings scratching on the ground, the long summer nights that stretched into early mornings and sleeping on the streets. The burning pain on his skin when he runs through the streets; the air thick and white with tear gas.

Sleep eludes him. When he does fall asleep, he sees his friends disappearing one by one in his dreams. “My roommate says I shiver a lot in my sleep,” he said. “Sometimes I jump up from my bed, screaming.”

In November 2019, after seven straight days without sleep, Ted fainted. He had been following the intense confrontations during the siege of the Hong Kong Polytechnic University. Thousands were trapped on campus after the police sealed off all escape routes. Hundreds were injured and arrested.

“The reason I went to the front line in the first place was because I wanted to protect the people behind,” he said. “But when you see people younger than you suffering, those who you are supposed to protect, but you are away and safe, this for me, was the greatest pain.”

In January this year, a study by researchers at the University of Hong Kong found that nearly one-third of adults in the city experienced symptoms of PTSD, and about one in 10 showed symptoms of depression.

Gabriel Leung, the dean of HKU’s faculty of medicine and an expert in public health, who co-led the research, says the figures are comparable to those seen in areas of large-scale disasters, armed conflict or terrorist attacks. “Hong Kong is under-resourced to deal with this excess mental health burden,” he warned.

For the exiles, their daily lives were uprooted and turned on their heads. Faced with financial insecurities, uncertainties of visa status, and the possibility of never returning home, many are struggling.

“PTSD is very common among young protesters who fled to Taiwan,” Wu added. “Some find themselves always anxious. Some assume it must be the police coming when they hear footsteps at night. And many refuse to seek professional help because they fear that medical records would leak to pro-China parties.” 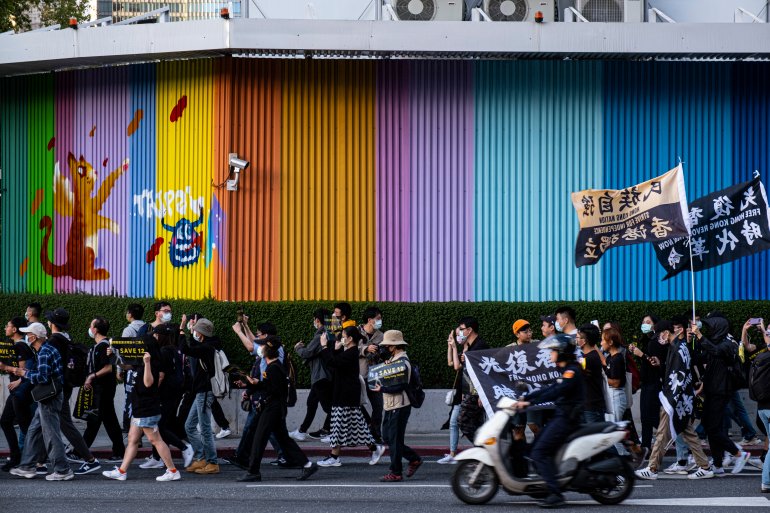 A march in Taipei on October 25, 2020 calls for the release of 12 Hongkongers arrested while attempting to flee to Taiwan. Ted volunteered to help during the march. He hopes to continue his fight in exile

A sweeping security law that Beijing imposed on Hong Kong this summer has led to a new wave of departures. Some have been caught fleeing, including 12 who were intercepted by the Chinese coast guard on a speedboat heading towards Taiwan, and have been imprisoned in a mainland jail for more than 100 days.

Ted finds it all painful to watch but feels like he has to.

“There is no reason for me to avoid bearing witness,” he said. “I have already run away. This is an inevitable pain, a pain that I must endure.”

This July, after living from one extension of his three-month tourist visa to the next for more than a year, Ted finally received residency rights in Taiwan by enrolling in a local university. He was a science major back in Hong Kong, but now he has chosen to study politics.

“It sounds so naive really,” he chuckled. “But I wanted to gear up myself. So that when Hong Kong needs me, I can step forward and help.”

Lessons from the past

Ted now spends his free time learning about Taiwan’s history. He travels to different parts of the island on a scooter he recently bought, and visits museums, former residences of dissidents and sites that were once used to detain political prisoners. 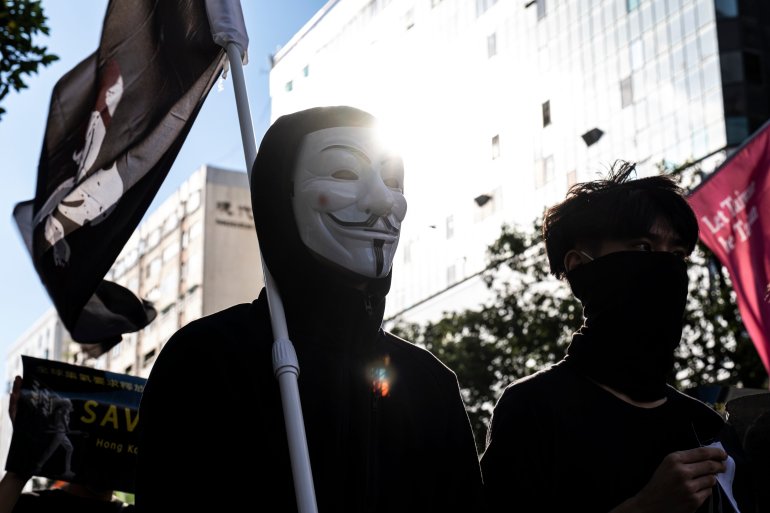 Hong Kong protesters holding a ‘Liberate Hong Kong, revolution of our times’ flag during a demonstration in Taipei on October 25, 2020

He has met many people who had family members imprisoned, killed or silenced under the Kuomintang’s one-party rule. During that time, now known as Taiwan’s White Terror period, people, especially dissidents, were often disappeared and never heard from again.

Martial law was not lifted on the island until 1987, and it took another 30 years before Taiwan started looking for the truth of its dark past. Ted feels it will be the same for Hong Kong. “Hong Kong is still suffering from pain,” he said. “But one day, maybe 30 or 40 years from now, we will also need experiences in transitional justice. I need to learn it now.”

In October, he helped organise a demonstration in Taiwan calling for support for Hong Kong. He also started to participate in local social movements on gender equality and fighting forced eviction.

The nightmares and flashbacks that have haunted Ted are now easing, He stopped going to the doctors several months ago because he does not want to rely too much on medication.

“Being busy distracts myself. After finding a new goal, I have also found my anchor.”

For Ted, healing is a lifelong process.

Living with trauma, he says, is like living with a thorn in his heart. Days and years might pass, but it does not mean that he has stopped caring about Hong Kong.

“It’s like there is this indelible wound, but you can only learn to accept it and live with it,” he said. “I think all Hong Kong people now live with this trauma.”