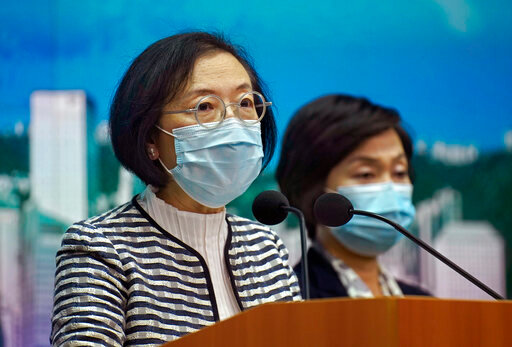 Classes for primary 1 to 3 students will be suspended for two weeks from Monday. The suspension comes just over a week after kindergartens were ordered to close following an outbreak of upper respiratory tract infections.

Hong Kong confirmed 26 new coronavirus infections on Friday, 21 of which are local cases.

“I would appeal to people to stop all unnecessary gathering activities because the situation is severe now in Hong Kong,” Hong Kong health minister Sophia Chan said.

Hong Kong is due to launch an air travel bubble with Singapore on Sunday. Currently, the air travel bubble remains on track, although it could be suspended according to the agreement between Singapore and Hong Kong if the seven-day moving average for untraceable coronavirus infections exceed five in either city.

HERE’S WHAT YOU NEED TO KNOW ABOUT THE VIRUS OUTBREAK:

— Health experts use of certain drugs for COVID-19

HERE’S WHAT ELSE IS HAPPENING:

BEIJING — Authorities in China’s northern city of Tianjin have sealed off a hospital, a residential compound and a kindergarten after the city found four new local cases of the coronavirus Friday.

Health authorities said they are sealing off the entire residential compound and classifying the area as high-risk. They’ve also sealed off the hospital where one of the patients went for his diagnosis and the kindergarten that the granddaughter of one patient attends. Parents and teachers of the kindergarten are being quarantined at home.

HONOLULU — Anyone flying to Hawaii will be required to have a negative COVID-19 test result prior to their departure for the state, with the new rule going into effect two days before Thanksgiving, Gov. David Ige announced Thursday.

Until now, passengers flying to the islands using a pre-travel testing program were permitted to arrive and then upload their negative test results to a state database, allowing them to skip two weeks of quarantine.

However, some travelers who arrived in Hawaii without their test results wound up later testing positive. That, in part, prompted the rule change, Ige said at a news conference,

The new program goes into effect Tuesday, just ahead of the holiday.

To bypass the 14-day quarantine, travelers must have the correct type of COVID-19 negative test results from one of the state’s trusted testing partners, Ige said.

“If test results are not available before boarding the final leg of their trip, the traveler must quarantine for 14 days or the length of the stay, whichever runs shorter,” he said.

Passenger have always had the option to not get tested at all and quarantine in their hotel rooms or homes upon arrival. Travelers will continue to have that option.

SEOUL, South Korea — South Korea’s prime minister has urged the public to avoid social gatherings and stay at home as much as possible as the country registered more than 300 new virus cases for a third consecutive day.

The Korea Disease Control and Prevention Agency said Friday the 363 cases reported in the past 24 hours took the country’s total to 30,017 with 501 deaths since the pandemic began.

South Korea’s caseload has been on a steady rise after it relaxed its physical distancing rules last month.

Prime Minister Chung Sye-kyun on Friday asked people to minimize year-end parties and gatherings and called on businesses to let their employees work from home.

Local authorities on Thursday toughened distancing guidelines in the greater Seoul area, the southern city of Gwangju and some parts in the eastern Gangwon province.

Large crowds attended events at the United House of Prayer for All People in October in west Charlotte.

In that time, public health contact tracers and Mecklenburg County officials have connected 213 COVID-19 cases to the events, which includes attendees and people who came in close contact with participants, The Charlotte Observer reported.

Of the deaths, 10 were from Mecklenburg County and two were from Gaston County, officials said in a statement.

SANTA FE, N.M. — New Mexico’s governor is calling a special legislative session next week in the hope of providing new economic relief to the unemployed and small businesses that are reeling from the coronavirus pandemic and aggressive emergency health restrictions.

She said the plan includes a weekly $300 supplement to the unemployed. Democratic state House speaker Brian Egolf commented: “You can support your people while we have to take difficult but critical steps in public health.”

The latest figures increased the state’s totals to 127,875 cases and 1,953 known deaths since the pandemic began. The number of infections is thought to be far higher because many people have not been tested, and studies suggest people can be infected with the virus without feeling sick.

The Nevada Hospital Association reported 1,288 confirmed or suspected COVID-19 patients are currently hospitalized. Both the number of reported daily cases and total hospitalizations are the highest since the start of the pandemic in Nevada.

SACRAMENTO — California is imposing an overnight curfew on most residents as the most populous state tries to head off a surge in coronavirus cases it fears could tax the state’s health care system, Gov. Gavin Newsom announced Thursday.

What officials are calling a limited stay-at-home order requires nonessential residents to stay home from 10 p.m. to 5 a.m. starting Saturday.

It affects counties with the most severe restrictions, 41 of the state’s 58 counties that are in the “purple” tier under California’s color-coded system for reopening the economy. That covers 94% of the state’s nearly 40 million residents.

The move comes only days after the state imposed restrictions limiting business operations in those 41 counties, which have the most significant increases in virus cases.

“The virus is spreading at a pace we haven’t seen since the start of this pandemic and the next several days and weeks will be critical to stop the surge. We are sounding the alarm,” Newsom said in a statement.

The order will last one month, until Dec. 21, but could be extended if infection rates and disease trends don’t improve.

EL PASO, Texas — Health care workers in the border city of El Paso, Texas, where the coronavirus pandemic has overwhelmed hospitals, are joining the nation’s top public health officials in urging people not to gather for Thanksgiving.

Surgical technologist Michelle Harvey said Thursday that personal protective equipment is in high demand at the hospital where she works. She and colleagues are frustrated that they often receive only one N95 respirator for 10- to 12-hour shifts and often have to reuse shoe covers.

There is a time-consuming process to request new equipment from locked storage units, Harvey said, and sometimes “the patient just doesn’t have enough time to wait for you to get new stuff.”

Harvey said she usually has 10 to 15 people in her home for the Thanksgiving holiday, but that this year she won’t.

“If you don’t take these precautions, this might be the last time,” said Harvey, 49. “This might be your last holiday with them.”

There were 1,225 new confirmed COVID-19 cases increasing the state total to 60,873. There were 20 new deaths reported, surpassing the 800 death toll since the start of the pandemic.

The number of people hospitalized with COVID-19 in Oregon is 414, the highest number since the pandemic began and a 142% increase since the beginning of November, according to state health data released Thursday.