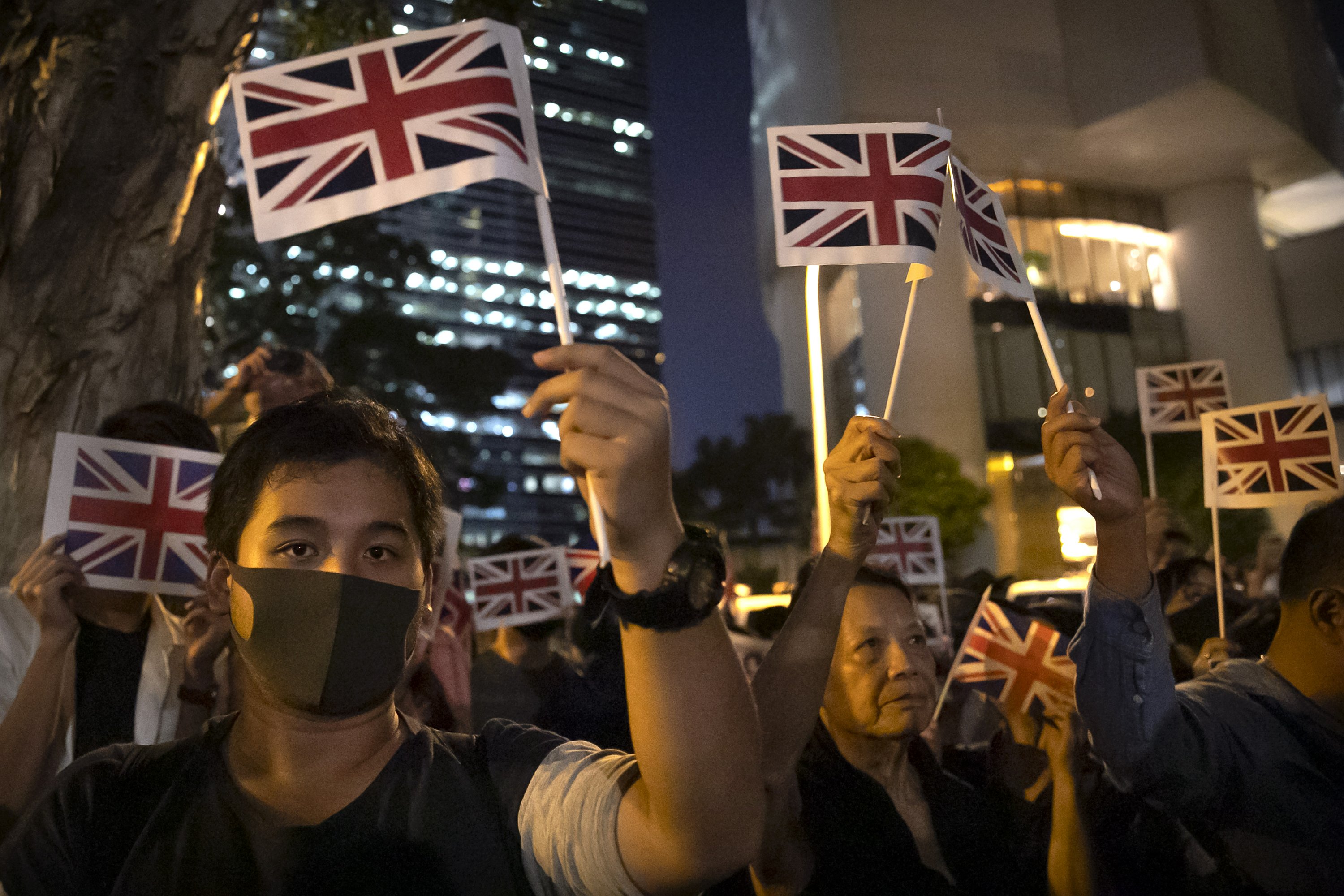 Hundreds of pro-democracy protesters have formed a human chain at the British Consulate in Hong Kong to rally support for their cause from the city’s former colonial ruler.

They sang “God Save the Queen,” then formed a line in front of the consulate and along nearby streets, waving Union Jack flags and chanting “Fight for freedom, save Hong Kong” and “We are British.”

The event was organized in support of a debate on Thursday in Britain’s Parliament on whether to offer British citizenship to Hong Kongers in light of the unrest that has gripped the city since early June.

People born in Hong Kong before July 1997, when China took back control of the city, were eligible for British National Overseas passports, which don’t provide British citizenship.

Protesters at the event said they’re neither separatists nor want to abandon Hong Kong. But they said they’re unhappy with how the city has changed since Britain ceded power to Beijing.

Hong Kong’s government has formally withdrawn an unpopular extradition bill that sparked unruly protests, which morphed into a broader campaign for democratic change in the semi-autonomous Chinese city.

The security chief announced in the legislature on Wednesday that the bill was being withdrawn.

Hong Kong’s leader had proposed amendments to extradition legislation as a way to resolve a case involving a man wanted for murder in self-ruled Taiwan, who could not be sent to face charges because there was no extradition agreement.

But the proposals sparked widespread fears that residents would be at risk of being sent to mainland China’s Communist Party-controlled courts.

Lam was forced to back down and said last month she would drop the bill.

Hong Kong authorities are set to formally withdraw an unpopular extradition bill that sparked months of chaotic protests in the semi-autonomous Chinese city.

The security chief is due on Wednesday to announce the bill’s withdrawal in the city’s legislature.

Hong Kong leader Carrie Lam had proposed the amendments to resolve a case involving a man wanted for murder in Taiwan who could not be sent to the self-ruled island because there was no extradition agreement in place.

But the proposal stoked widespread fears residents would be put at risk of being sent into mainland China’s Communist Party-controlled judicial system, and Lam was forced to drop the bill in the face of fierce opposition.

The crisis has snowballed into demands for universal suffrage and an investigation into police tactics.
Add Comment