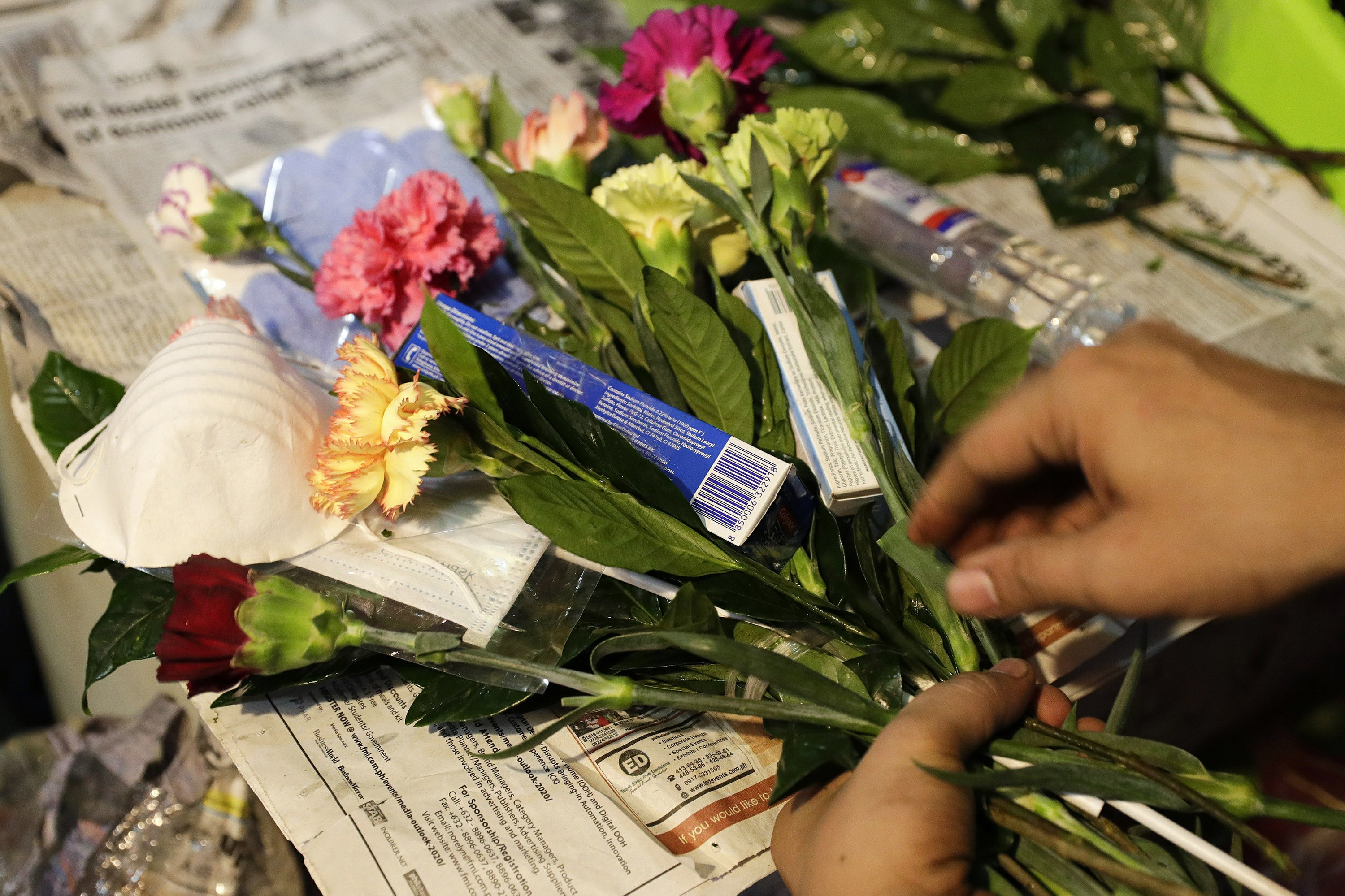 The Catholic diocese in Hong Kong has announced that Masses will be suspended for two weeks amid the spread of the new virus.

In a brief video announcement, Cardinal John Hon Tong wore a surgical mask as he urged the city’s 400,000-member Catholic community not to panic.

He said Masses will be halted from Feb. 15 to Feb. 28 to avoid large gatherings because the next two weeks will be crucial for suppressing the epidemic. He urged members to participate in online Mass, share anti-epidemic materials and pray for each other.

Hong Kong has reported 51 cases, including one death.

China’s Hainan Airlines has canceled the last direct flight connection between Beijing and Berlin because of the new virus. The German news agency dpa reported that Hainan would no longer operate any flights between the two cities starting Thursday. The flights will be halted until March 28.

The Lufthansa Group of airlines announced early last week that it would cancel flights to China, including those by its subsidiaries Swiss and Austrian Airlines.

The group said there would be no flights to Beijing or Shanghai until Feb. 29 and that other destinations -- Nanjing, Shenyang and Qingdao - would be struck until the end of the winter schedule on March 28.

The 19 flights weekly to Hong Kong are to continue as scheduled as the company keeps a close eye on the situation, Lufthansa said.

Hundreds of flights to and from mainland China have been canceled, including those run by Air Canada, British Airways Turkish Airlines, United, American Airlines, KLM, Air France, Qantas and Delta.

A Philippine businesswoman is selling bouquets of Valentine’s Day flowers packed with hand sanitizers in a unique offer to help romantics fight the deadly viral outbreak.

Flower shop owner Mary Jane Villegas said Thursday that her bouquets can better express one’s love than traditional flowers with chocolates because they address widespread alarm over the virus.

Villegas says that aside from sanitizers, the bouquets also contain a protective face mask, soap, toothpaste and a bottle of alcohol neatly arranged with red roses, tulips and other popular flowers.

“I am scared of the virus, of course, we don’t know if the people we mingle with are sick,” she said. “We want to live longer, that is why I made this.”

Vietnamese news media say a community northwest of the capital Hanoi has been locked down due to a cluster of cases of COVID-19 confirmed there.

The village of Son Lai in Vinh Phuc province was quarantined after Vietnam’s 16th case was confirmed in a 50-year-old man. According to the Health Ministry, the quarantine will last 20 days.

The online newspaper VN Express says the latest case has a daughter who was infected. She was part of a group of eight Vietnamese workers for a Japanese company who had been training in Wuhan, the epicentre of the outbreak.

The workers returned to Vietnam on Jan. 17, and six have so far tested positive for the virus.

Vinh Phuc province has 11 of the country’s 16 cases, with the man bringing Son Lai’s total to eight.

Provincial authorities have established mobile shops and provided food and free masks to over 10,600 people.

Authorities have also set up a field hospital with 300 beds and a 200-bed facility at a military school.

Hong Kong has extended the closure of schools because of a viral outbreak to March 16.

The city’s Education Secretary Kelvin Yeung says the decision to delay the reopening of schools after the Lunar New Year holiday took into account the advice of health experts, readiness of schools and the supply of epidemic preventive materials.

Students were supposed to return to classes on Feb. 17, then were told it’s been delayed to March 2.

Yeung says “social distancing and avoiding the mass movement of people” are key to preventing and controlling the outbreak.

Hong Kong has confirmed 50 cases and one death.

China’s U.N. ambassador says the government “is confident that it is capable of winning the fight” against the new virus, saying its efforts “are achieving positive results.”

Zhang Jun told a U.N. meeting Wednesday evening in New York that China’s confidence has been further boosted by the decline of new confirmed cases in regions beyond the epicenter in Hubei province for eight consecutive days, and the significant rise in cured cases to more than 5,000.

He called on the international community to maintain solidarity, increase sharing of information, experience and technology, “and work with the Chinese government and people to jointly meet the challenges.”

Zhang also called on the international community “to remain rational,” base actions on evidence, respect the World Health Organization’s guidance, “evaluate the epidemic objectively and impartially, and take proper measures to avoid overreaction that would cause greater negative effects.”

The Chinese ambassador stressed the need for mutual trust, saying people everywhere must “oppose politicization of health issues and leave no breeding ground or space for any racist comments, discrimination or stigma.”

He says: “Led by President Xi Jinping, China has mobilized itself and adopted the most comprehensive and rigorous preventive and control measures, which have fully demonstrated the power and advantages of our system whereby all resources are pooled together to cope with major challenges.”

Tokyo Olympic organizers have reiterated their message at the start of two days of meetings with the International Olympic Committee: the Summer Games will not be waylaid by the virus spreading from neighboring China.

Yoshiro Mori, the president of the organizing committee, says “we are not considering a cancellation or postponement of the games. Let me make that clear.”

The Olympics open in just over five months, and the torch relay begins next month in Japan — a clear signal the games are almost here.

Although there have been no deaths in Japan attributed to the virus, Tokyo and IOC officials are clearly jittery. Sitting among the officials in Tokyo was Dr. Richard Budgett, the IOC’s medical and scientific director.

Last week Toshiro Muto, the CEO of the Tokyo organizing committee, said he was “seriously worried that the spread of the infectious disease could throw cold water on the momentum toward the games.” He backed down a day later and said he was confident the games would go forward.

The virus on Wednesday forced the cancellation of a popular Formula One race set for April in Shanghai, which draws more than 100,000 over a race weekend.

A Singapore official says the number of infections in the city-state is likely to rise after 50 people have been confirmed ill.

Lawrence Wong, a co-chairman of Singapore’s task force fighting the outbreak, says the virus is clearly circulating within the population and it’s too early to tell how things will unfold.

He says “we don’t know how successful we will be in all of these containment measures that we have put in place.”

Wong says additional measures may involve “social distancing in order to try and reduce the chance of the virus spreading further.”

Among the 50 cases confirmed so far, 15 had fully recovered while eight are in critical condition. A bank employee, a 62-year-old man, was the most recent case. The city has found several clusters of cases, including a church, a traditional Chinese medicine store, a business meeting held last month and a construction site.

North Korea has announced it will impose a monthlong quarantine for all foreign visitors and others suspected to have a new virus.

The official Korean Central News Agency says the decision to extend the quarantine period to 30 days was based on researches suggesting that the incubation period of the virus could be as long as 24 days.

The report didn’t confirm the country’s previous quarantine period, but the Russian Embassy in Pyongyang said in a Facebook post earlier this month that North Korea was putting foreign visitors under a 15-day quarantine.

All the institutions and fields of the state and foreigners staying in the DPRK should obey it unconditionally.”

North Korea has yet to report a case of the virus, but state media reports have hinted that an uncertain number of people have been quarantined after showing symptoms. Experts say an epidemic in North Korea could be dire because of its chronic lack of medical supplies and poor health care infrastructure.
#COVID  #COVID-19
Add Comment