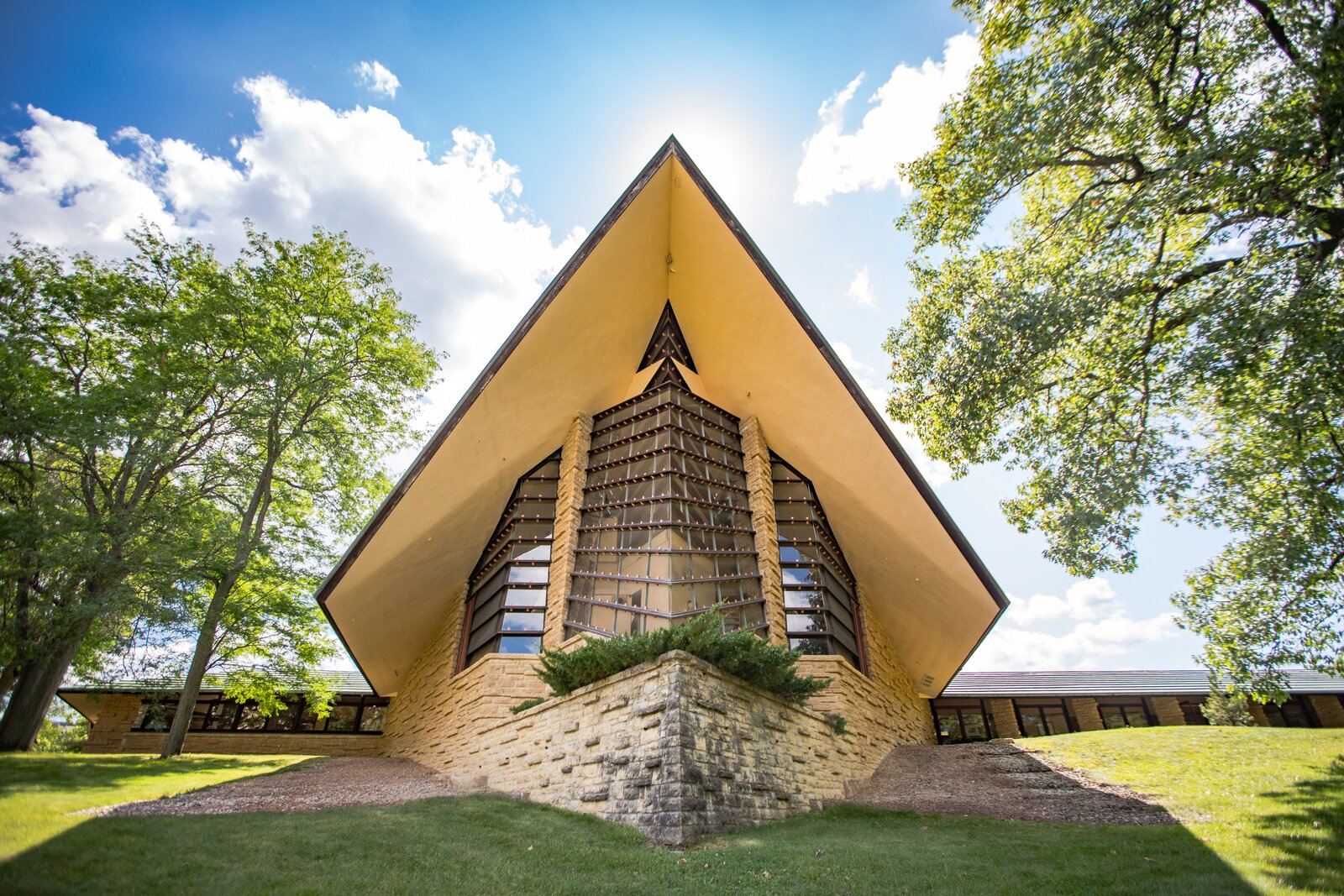 The official Frank Lloyd Wright Trail guides travelers to nine of the renowned architect’s most significant buildings in his home state of Wisconsin.

Frank Lloyd Wright once famously said, "Study nature, love nature, stay close to nature. It will never fail you." Now, a self-guided motor trail honoring the visionary architect incorporates this sentiment by piecing together his architectural masterpieces with lovely landscapes in his birthplace and home state: Wisconsin. The Frank Lloyd Wright Trail winds and weaves through southern Wisconsin, featuring stops at nine of the architect’s most impressive buildings along the way. Take this architectural road trip to learn more about Wright’s philosophy on nature and design-and to admire some of the most beautiful midcentury-modern structures in the world. 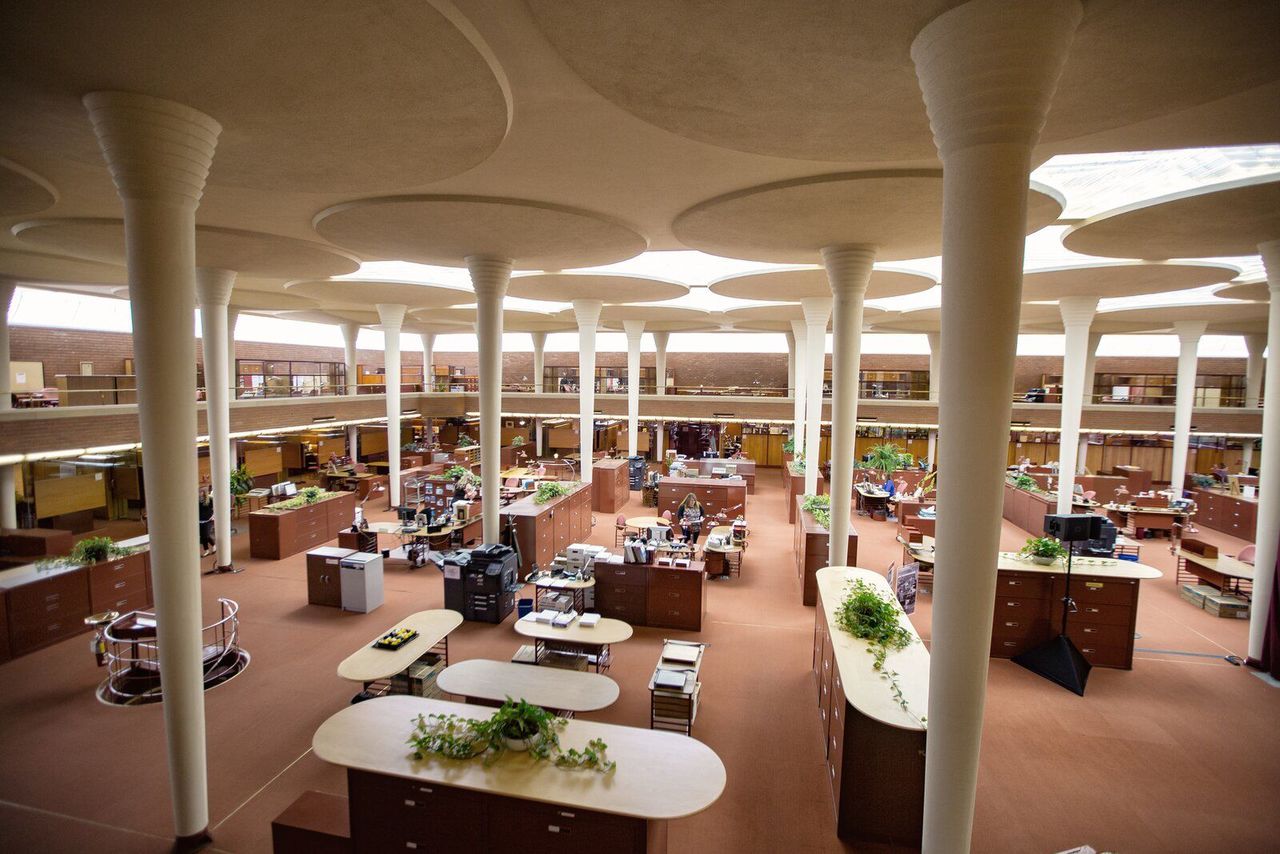 The Administration Building’s one-half acre Great Workroom is known for its tree-shaped columns, which Wright referred to as "dendriform." The Wisconsin Industrial Commission refused to approve the columns until Wright conducted an experiment that showed they could withstand sixty tons of weight-or ten times the required amount. In 1937, the construction was approved.

Start your journey in Racine, Wisconsin, with a free tour of the SC Johnson Administration Building-the only corporate headquarters designed by Wright that remains in operation. In 1936, household cleaning product manufacturer Herbert Fisk Johnson Jr. reached out to Wright to build the "best office building in the world" for his company’s global headquarters. In addition to designing "bird cage" circular elevators and more than 40 pieces of furniture for the open-plan office space-including rolling file carts that could be easily moved around-Wright crafted nearly 200 special shapes of brick for the building’s curved walls on the exterior and interior. Still, the crowning design achievement of the Administration Building is the tree-shaped (or "dendriform") columns in the Great Workroom, which are nine inches wide at the base and expand to 18.5 feet in diameter at the ceiling. 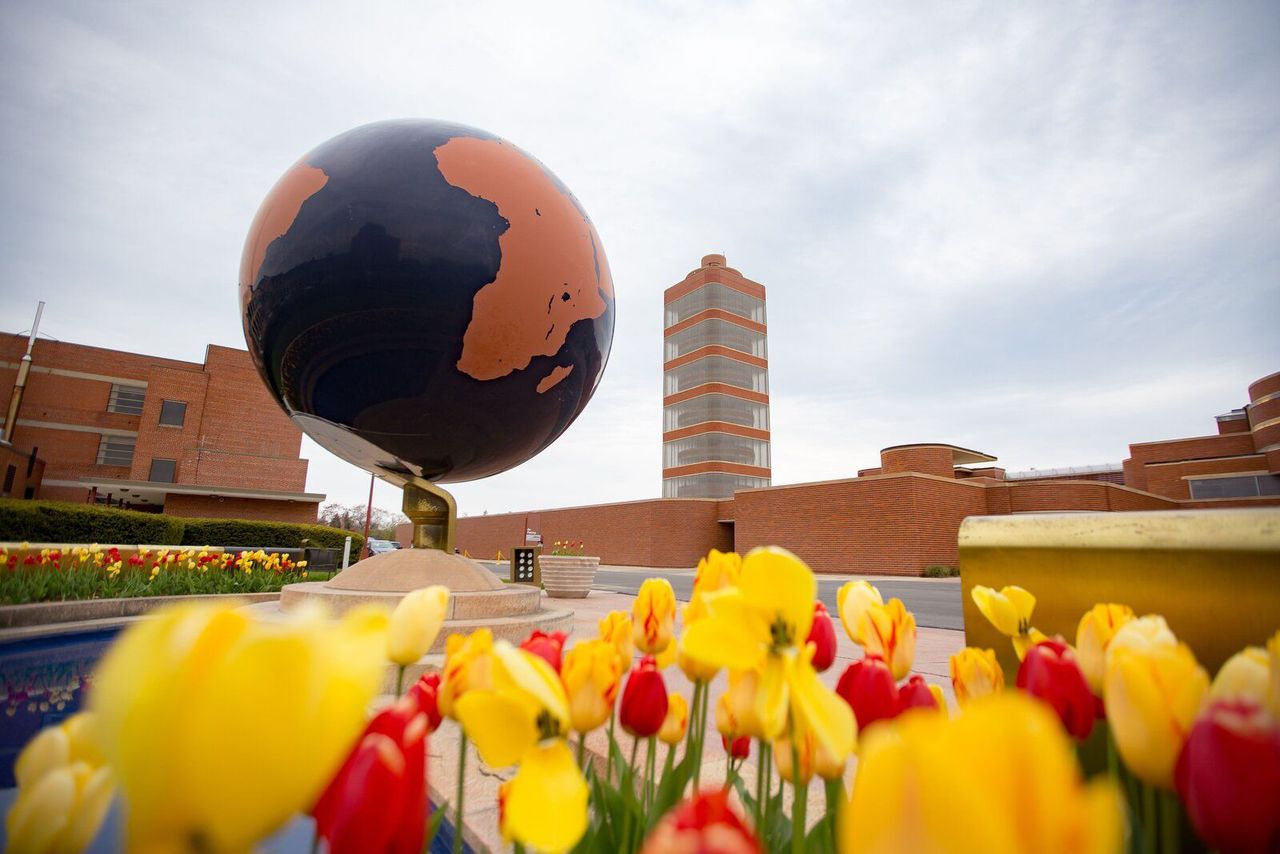 The Research Tower’s windows are comprised of 7,000 Pyrex tubes, and at certain times of the day, you can see the silhouette of the floor plan.

Don’t leave the SC Johnson campus without visiting the Research Tower, which opened in 1950 and is still one of world’s the tallest cantilevered buildings. Like the dendriform columns in the Administration Building, the Research Tower is smaller along the base than it is at the top of the structure. In fact, the more than 150-foot-tall building stands on a base that measures only 13 feet wide at its narrowest point, which creates the illusion that the Research Tower is suspended in the air. To support the building’s 15 floors, Wright created a "taproot" core that extends 54 feet underground and offers stability for the structure, much like the roots of a tree. Guests can marvel over this architectural feat, as well as the alternating square and round mezzanine levels throughout the interior. 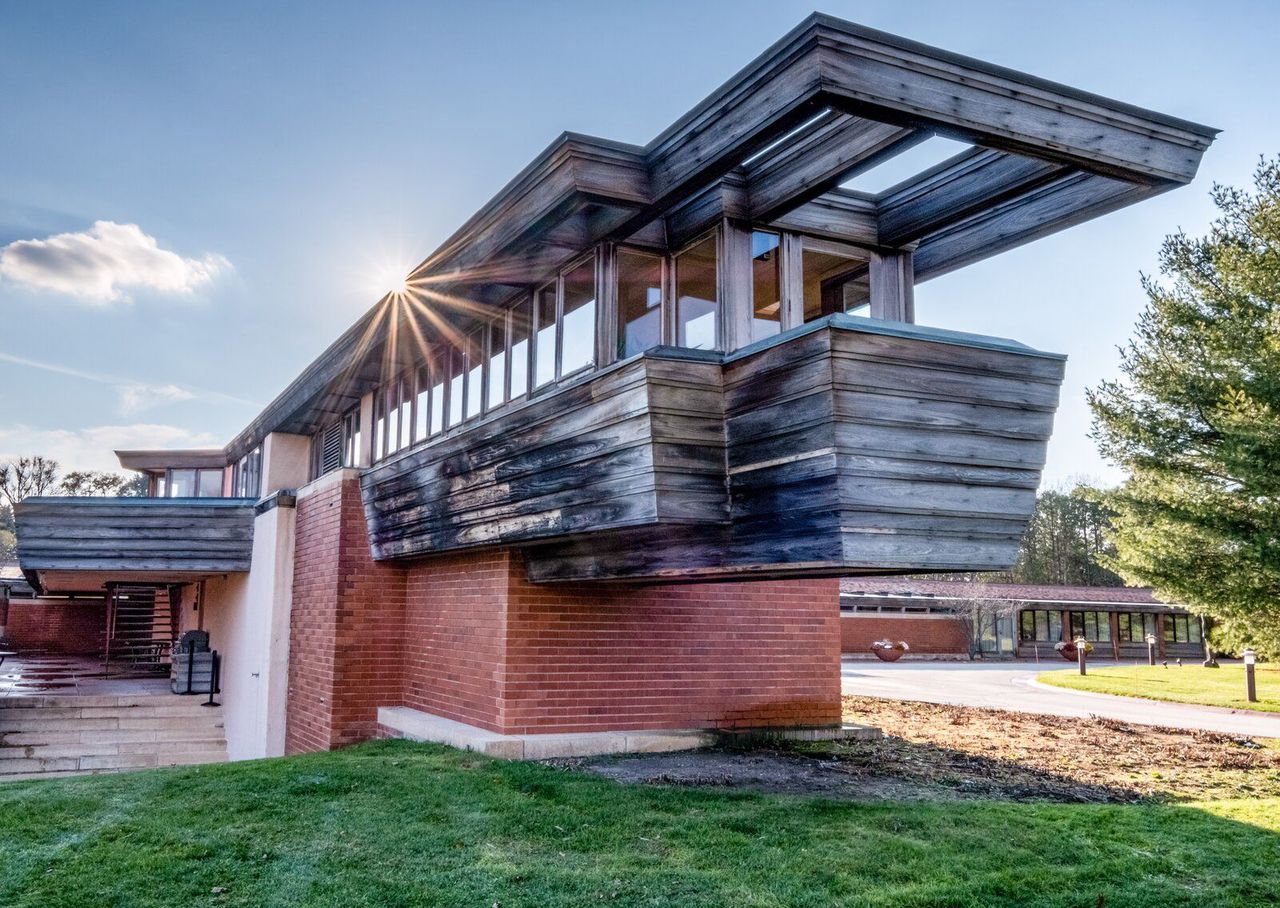 In 1939, Wright built the Wingspread estate on a wooded 30-acre lot with ponds and lagoons. The 14,000-square-foot Wisconsin home was designated as a National Historic Landmark in 1989.

Just five miles north of the SC Johnson Administration Building and Research Tower is Wingspread, a 14,000-square-foot Prairie style home that Wright built for the Herbert Fisk Johnson Jr. family in 1939. The house is shaped like a pinwheel with four wings that extend from the central Great Hall, which is anchored by a 30-foot-tall brick chimney with five fireplaces on three levels. Earthy materials like limestone, brick, stucco, and wood are pervasive throughout the residence, as are an abundance of skylights and windows that take advantage natural light and views of the surrounding 30-acre lot. Like the other SC Johnson buildings that Wright designed for Herbert Fisk Johnson Jr., Wingspread is free to tour. 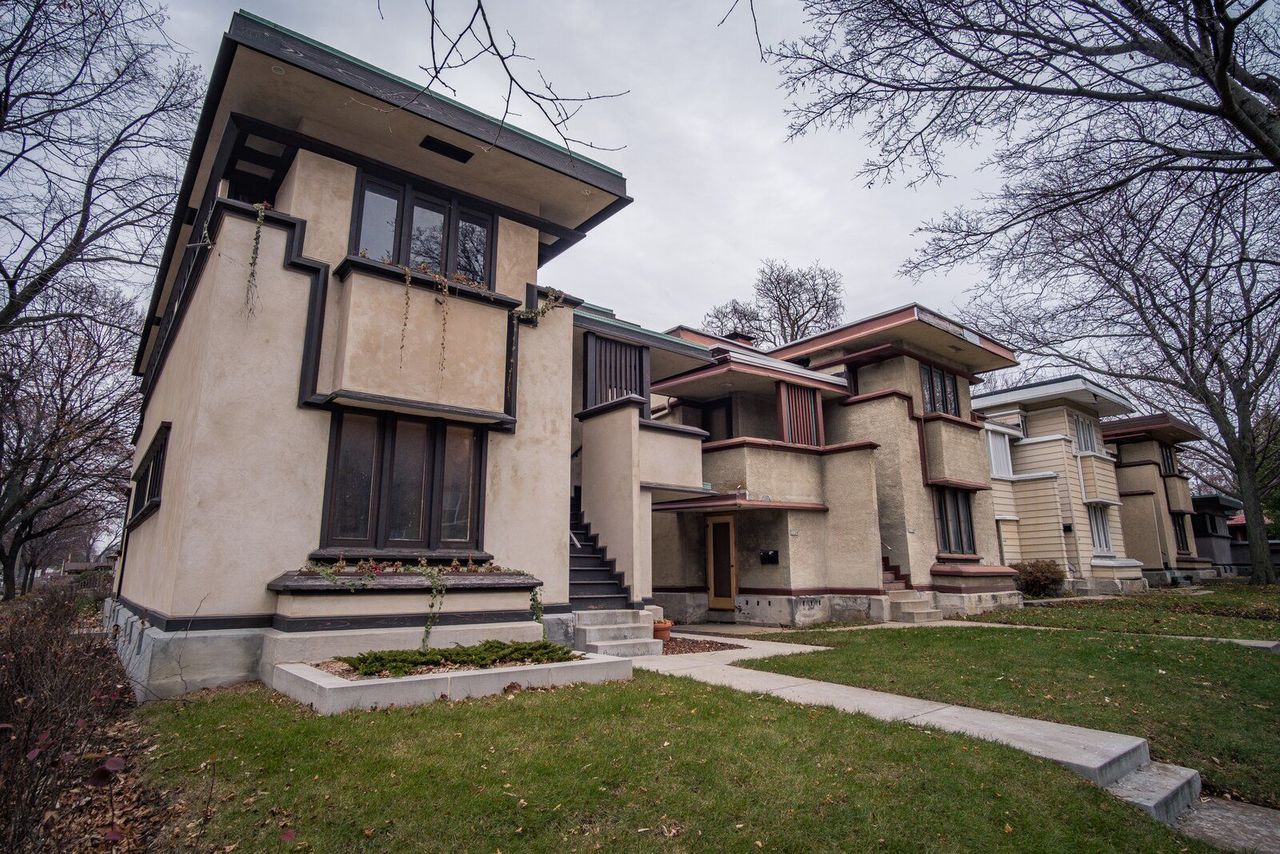 Wright's American-System Built Homes featured prefabricated models that could be customized based on the needs of the buyer.

Wright developed the American System-Built Homes in the early 20th century to provide affordable prefabricated housing to the public. Today, you can see six of the still-standing American System-Built Homes as part of the Burnham Block collection in southwest Milwaukee. Some of the homes, which were built between 1915 and 1916, are in the process of being restored to their original glory for tours and future vacation rentals. The two-bedroom home at 2714 West Burnham Street is the best preserved of the bunch. Inside, visitors will discover an abundance of Wright-made furniture, plus an atrium and central fireplace in the living room, as well as original woodwork in the kitchen. Although the home is only 800 square feet, Wright’s thoughtful design makes the layout feel much larger. 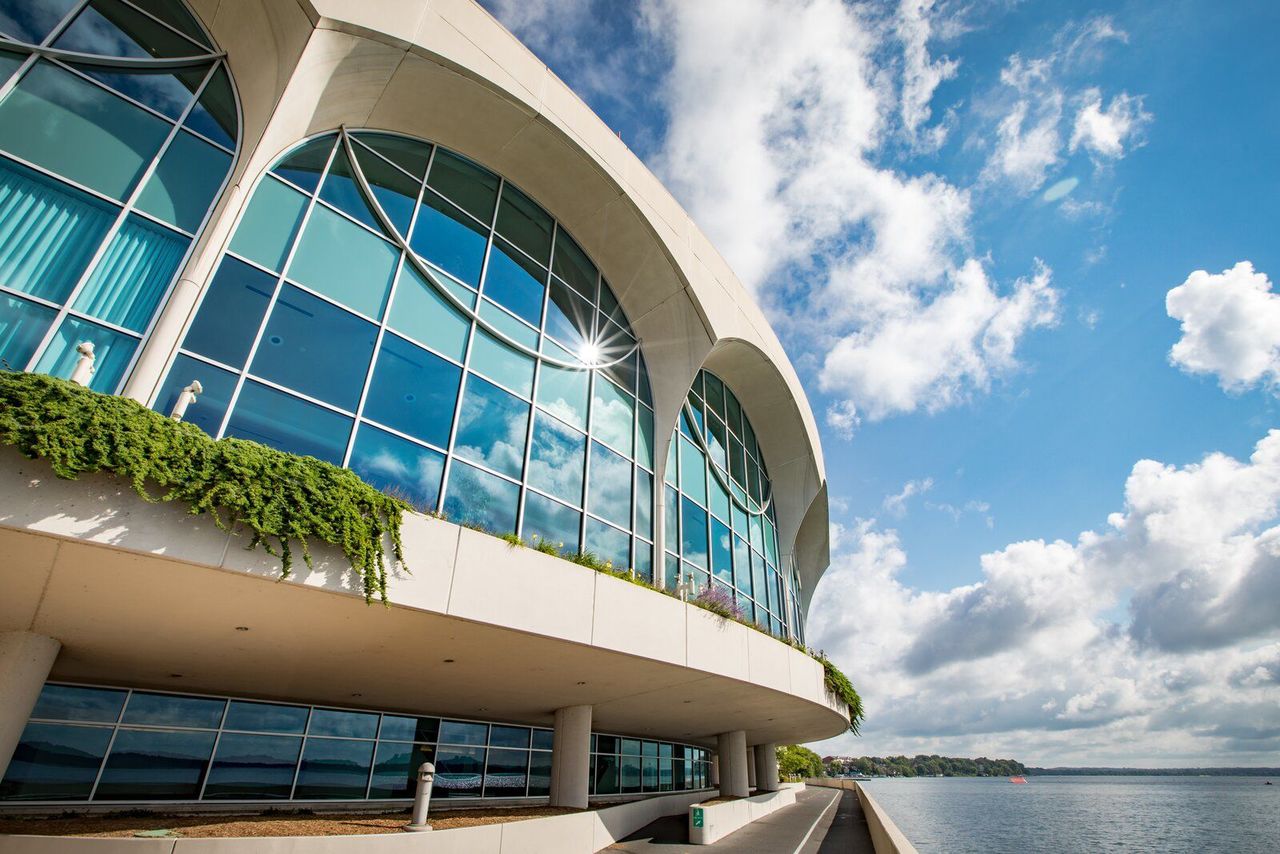 Although Wright proposed his design for the Monona Terrace Community and Convention Center in 1938, the building-which features large, curved windows-wasn’t fully realized until 1997.

Monona Terrace Community and Convention Center differs from many of the other buildings on this list because it was constructed long after Frank Lloyd Wright died. The architect proposed his design for the convention center in 1938, but it wasn’t until 1997-38 years after Wright’s death-that the building was completed by architect Anthony Puttnam of Taliesin Architects, who was one of Wright’s apprentices. Puttnam stayed true to Wright’s vision for the curvilinear exterior of the building and ensured that the interior featured an aesthetic that Wright was partial to, such as circular patterns, desert tones, and midcentury-modern furniture. While the rooftop is open daily, you’ll need to book a tour to see the building’s interior. Rent a kayak on Lake Monona to get a full view of the convention center’s unique facade overlooking the waterfront. 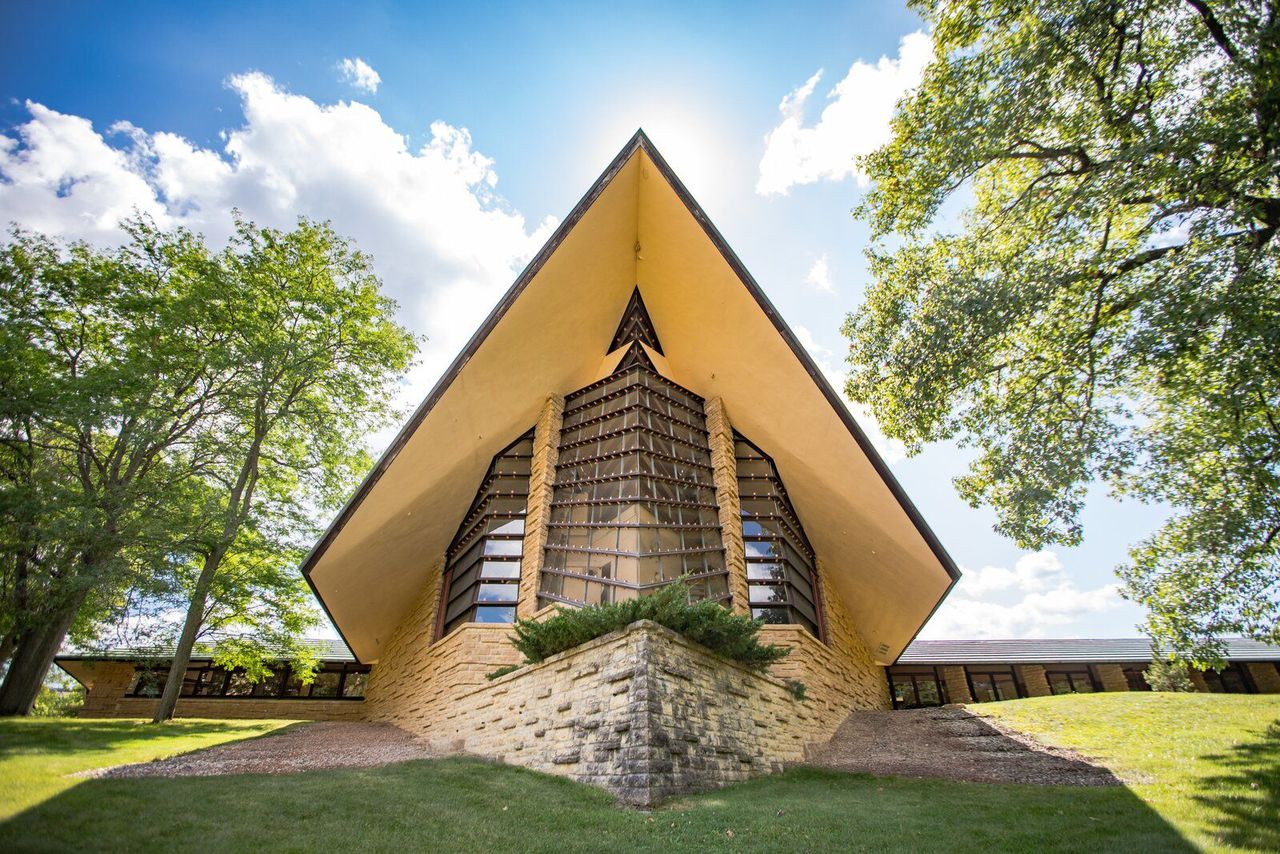 Exterior, Mid-Century Building Type, Metal Roof Material, A-Frame RoofLine, and Stone Siding Material Wright designed the First Unitarian Society Meeting House so that it lies on the brow of the hill that it is set on, rather than the top.

Wright-a member of the First Unitarian Society and the son of one of its founders-was commissioned to design the Landmark Auditorium at the congregation’s First Unitarian Society Meeting House in Madison. The building has many Usonian features including concrete floors, wide eaves, and a copper roof, but it’s the southern side of the building that showcases Wright’s ingenuity. The glass- and wood-clad structure converges to form a shape that’s similar to the bow of a boat. This was Wright’s way of combining the steeple and church in one design feature, and the innovative technique has been utilized for many churches since it was created by Wright in 1951. Take a tour of the First Unitarian Society Meeting House to learn about the construction phase of this U.S. National Historic Landmark-including how members quarried for the exterior stones themselves. 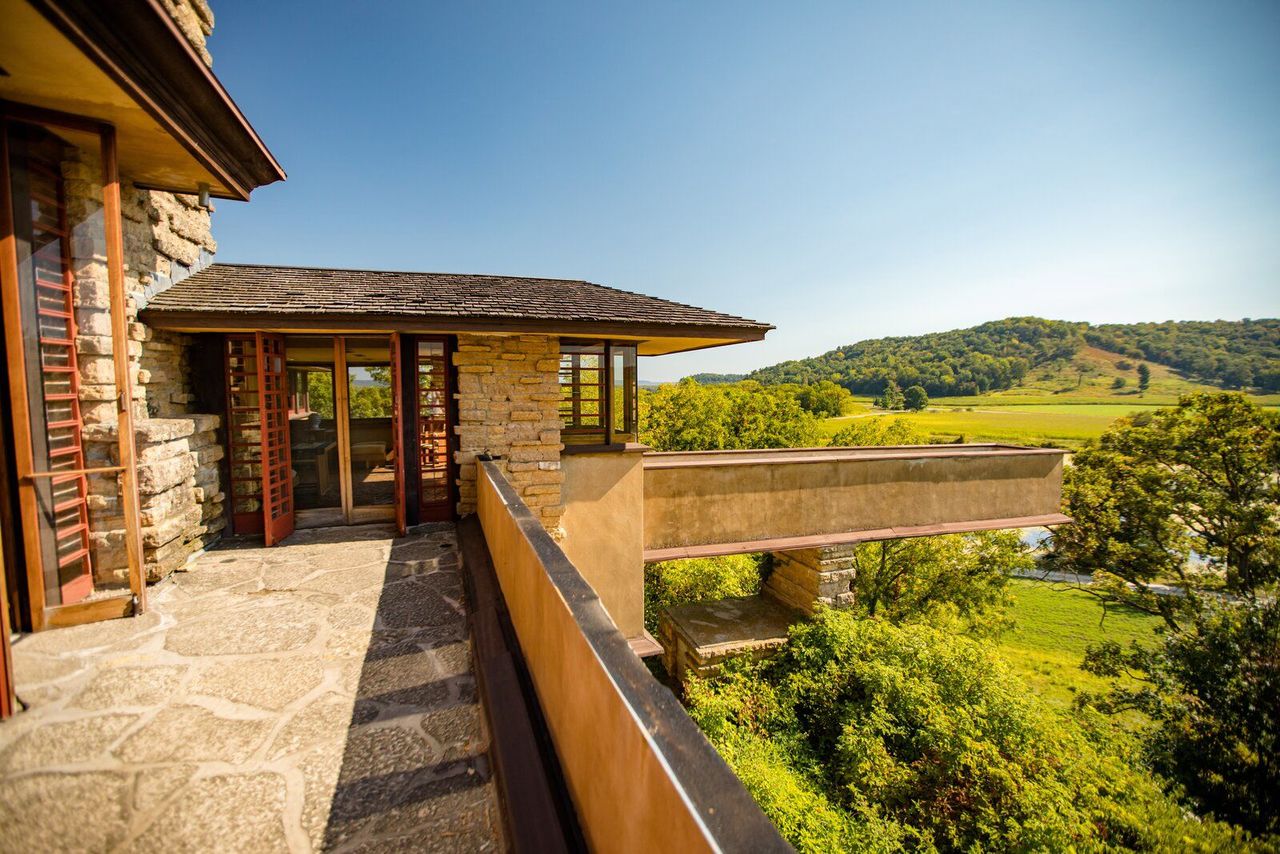 A visit to Wright’s former home, studio, and country estate starts at the Frank Lloyd Wright Visitor Center, where you can peruse the gift shop and purchase snacks in the café on-site. From there, you’ll take one of six tours of the 800-acre Taliesin, which overlooks the Wisconsin River and includes buildings that Wright designed over the course of his decades-long career. Depending on your tour, you’ll explore such structures as the Romeo and Juliet Windmill, Tan-Y-Deri, Midway Barn, and Unity Chapel, or the Hillside Studio and Theater Building, which once housed the architect’s apprentices from the School of Architecture. Of course, Wright’s 37,000-square-foot former home is the star of the show. The outdoor spaces-gardens, courtyards, and the protruding Bird Walk balcony-are just as impressive as the living rooms and bedrooms, which showcase a variety of midcentury-modern furniture, as well as various ceiling heights, ample windows, and natural materials like wood and stone. 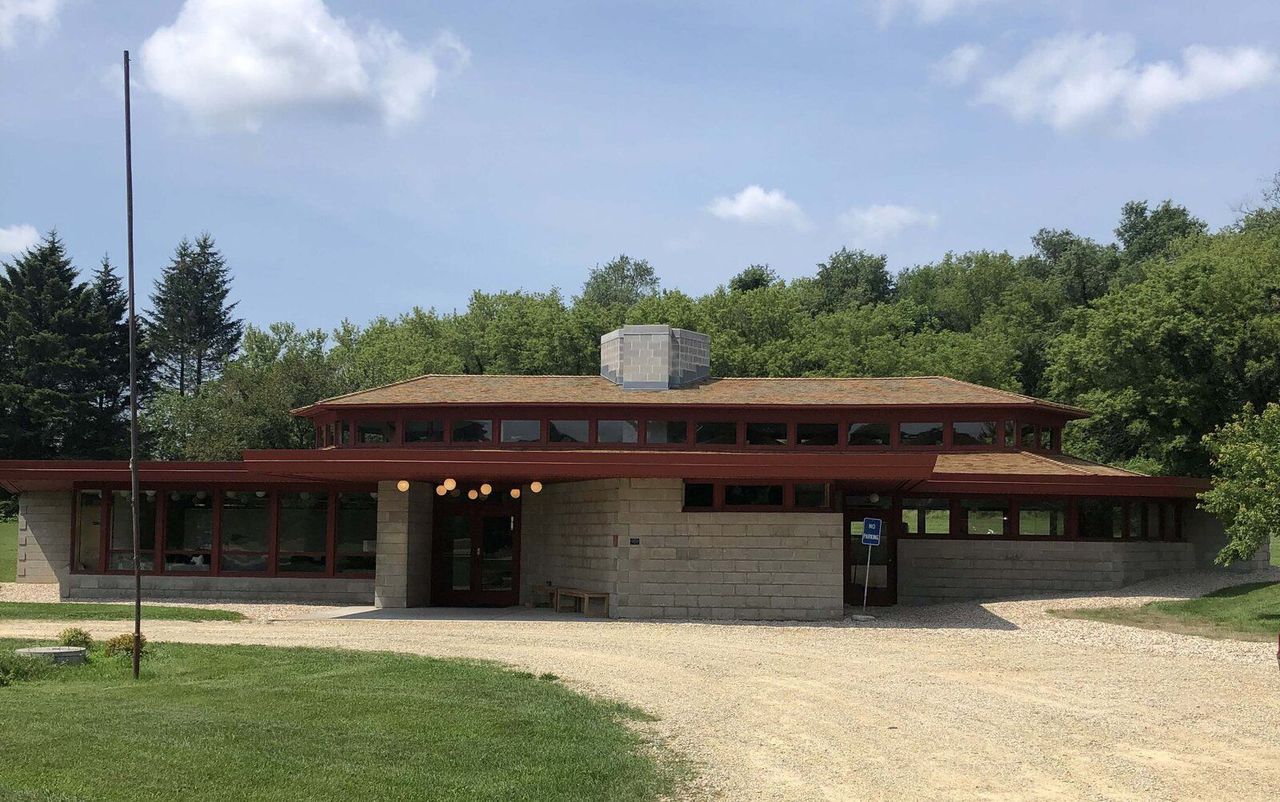 Just three miles from Taliesin is the Wyoming Valley School, which was built in 1957 after Wright donated the design and two acres of his land in honor of his mother, who was a kindergarten teacher. The simple, concrete-block structure has a stone exterior and a flat-raised roof with red-painted overhangs and matching window accents. Inside, there is a split-level atrium with clerestory windows and a large, angular fireplace that mimics the arrow-like shapes of the wooden ceiling beams. Today, the Wyoming Valley School is a nonprofit cultural arts center that offers event spaces, workshops, lectures, and exhibits. Half-hour tours are free, but unfortunately, they’re only offered during a short period in the summer. 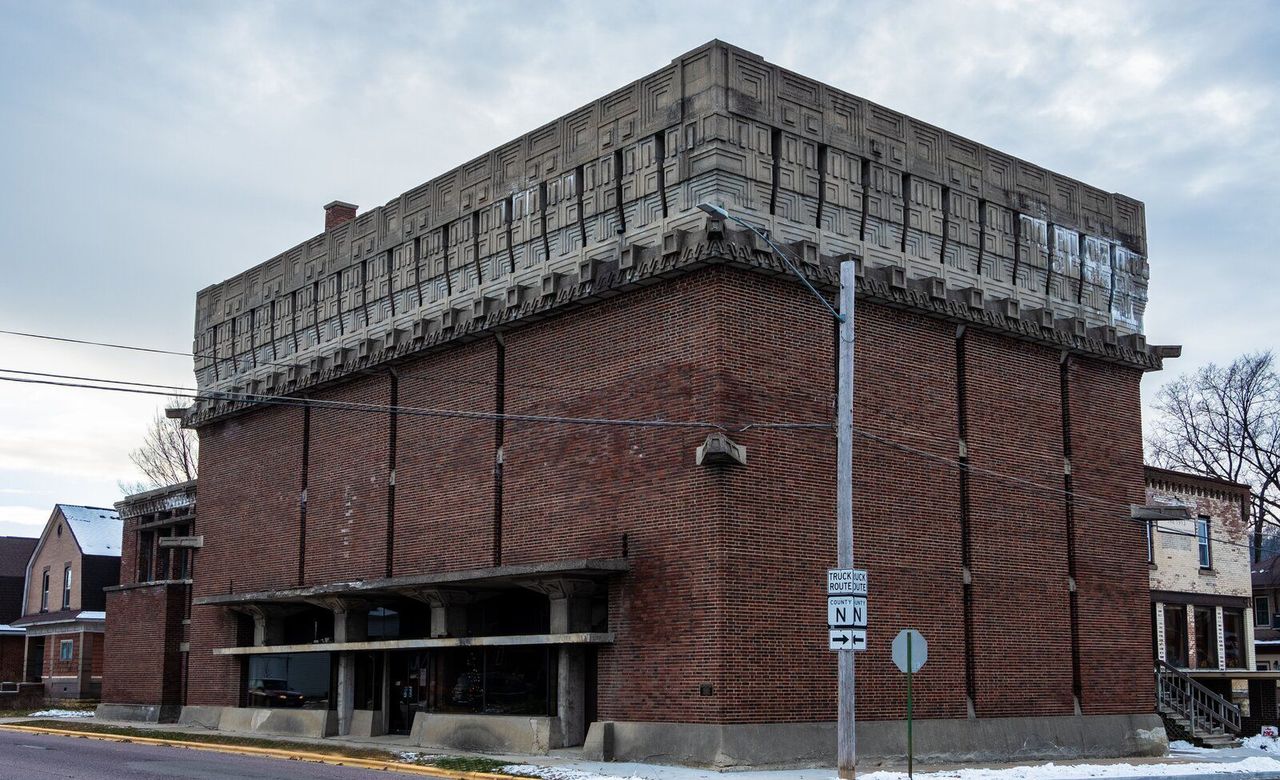 The last stop on the Frank Lloyd Wright Trail is the AD German Warehouse, which is located in the architect’s birthplace: Richland Center, Wisconsin. The warehouse, which was completed in 1921, originally housed Albert Dell German’s grocery business. But even for a structure that was only used to store staples like coffee, tobacco, sugar, and flour, Wright couldn’t help but put his mark on it. The brick building is said to resemble a Mayan temple, with its eye-catching frieze of repeating concrete motifs that encircles the top of the structure. Wright designed the four-story warehouse to rest on a pad of cork for stability and shock absorption, while its concrete floor slabs are supported by columns that shrink in size with each ascending level. Today, the building has a gift shop, a small theater, and an exhibit of Wright’s architectural work, but there are plans to make the site a gathering place for arts, business, and dining in Richland Center.