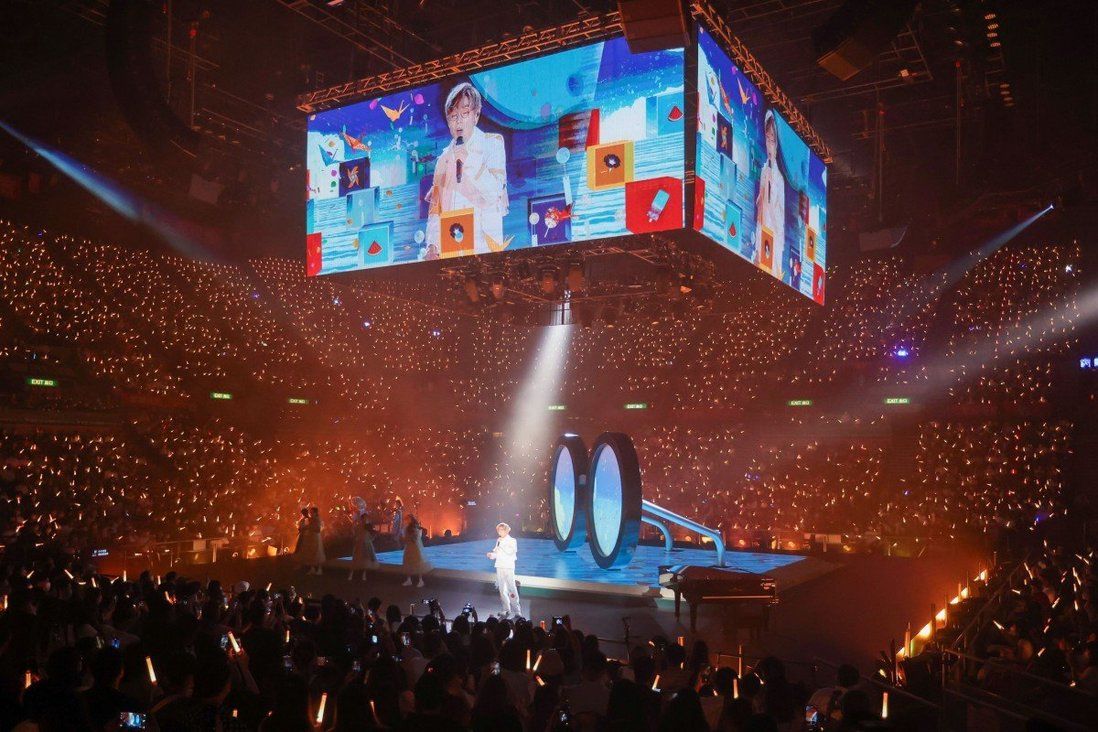 Singer-songwriter Terence Lam kicks off six-night run at the venue, after it was handed over to concert organiser as scheduled.

Singer-songwriter Terence Lam Ka-him started a six-night concert run under tightened rules with a stripped down set at the Hong Kong Coliseum on Friday, the first show at the venue since an accident during a performance by boy band Mirror last month.

Unlike usual entrances on an elevated platform, Lam walked up the stage to the piano, where he performed with minimal stage effects for the crowd.

Dancers joined Lam on stage for songs later in the show, but he remained mostly stationary, only walking towards different corners of the stage between verses.

The singer later said during the show that most stage effects were removed under the new regulations. 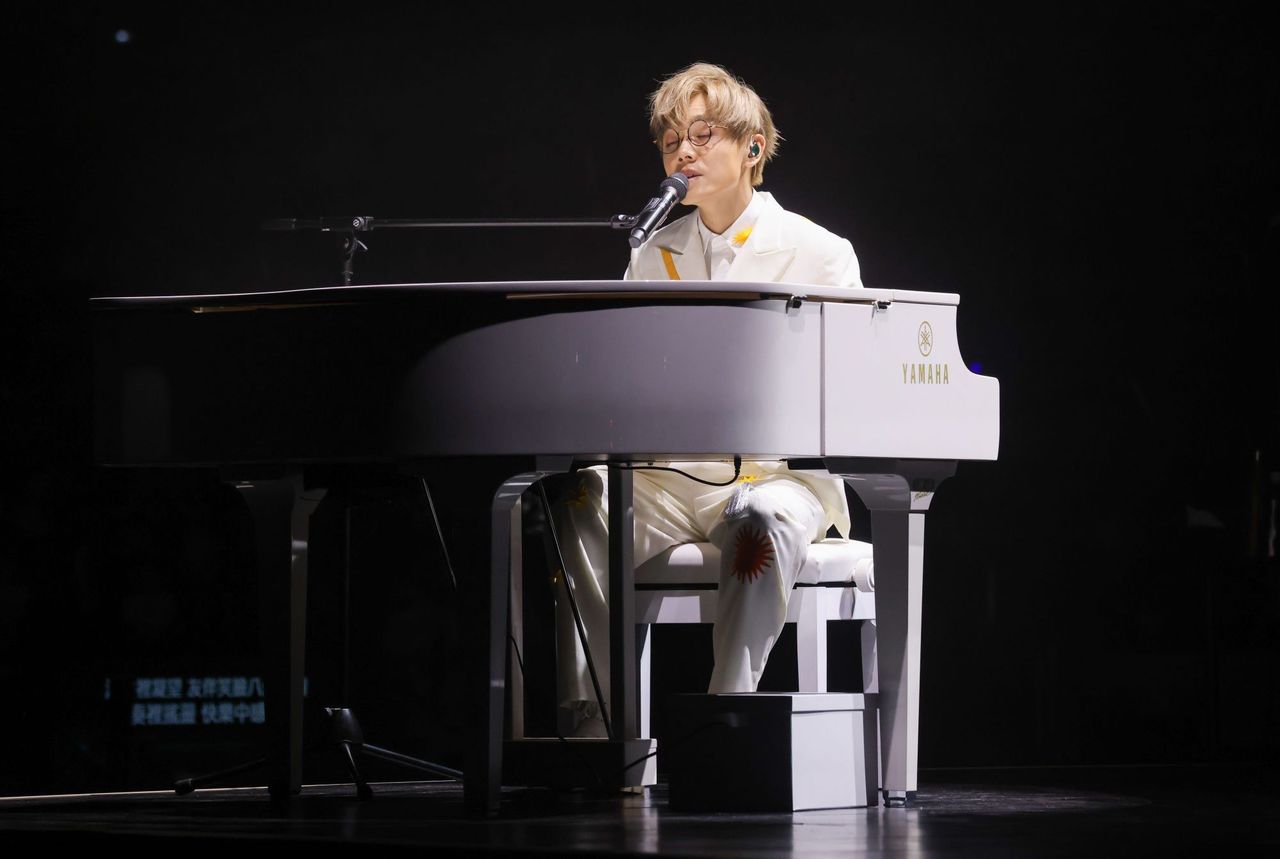 Terence Lam performs at the coliseum on Friday.

As suspended mechanical devices designed to swing, rotate or carry people have been temporarily banned at government performance venues, the organiser revealed that some props would have to be placed onstage for extended periods, blocking some audience members from a full view of the stage.

The production relied on staff members to manually move props between performances, as well as scenes projected onto the stage to supplement Lam’s songs. There were four stationary screens hoisted at the centre of the stage, showing pre-made videos and close-ups of the singer as he performed.

The concert’s organiser told the press that it had removed suspended mechanical devices and some unique stage designs could not be presented, as they had to follow the tightened rules.

According to the organiser, the last-minute stage changes doubled the crew’s original workload, but did not end up seriously delaying their preparation process. The organiser also confirmed that staff from the Hong Kong Coliseum were present every day to assist with their preparation.

A four-by-four-metre (13-by-13-foot) LED screen crashed down onto the stage during the fourth show of Mirror’s 12-night concert series on July 28 at the Coliseum, injuring two dancers.

Dancer Mo Li Kai-yin’s spinal cord was injured in the accident and he faces the possibility of being paralysed below the neck. Fellow dancer Chang Tsz-fung suffered injuries to his head, pelvis and thighs, and had been discharged from hospital.

A third dancer, Zisac Law Tak-chi, was revealed to have been injured during rehearsals.

Mirror’s concert organisers announced the cancellation of the remaining eight shows while the government tightened the supervision of stage design at public performance venues.

Apart from the temporary ban on all mid-air mechanical devices, show organisers are required to appoint an authorised individual approved by the government to review the safety of installations each day.

Police are looking into whether the accident involved criminal elements and an interdepartmental task force has also been set up to investigate its cause and recommend improvements.

The task force said its initial examinations had found a wire used to suspend the giant screen involved in the accident had shown signs of metal fatigue.

The venue was handed over to Lam’s concert organiser on August 13, after police had finished gathering evidence inside.

A spokesman for the Leisure and Cultural Services Department, which runs the Coliseum and other public performance sites, said the government had been in close contact with the organiser of Lam’s concerts and the venue had been handed over as scheduled.

He said the department had not dispatched extra staff to supervise rehearsals or performances, but Coliseum staff would oversee operations throughout the booked period.

Lam’s fans said they had faith in the newly tightened regulations.

Angela Chan Hiu-yee, a 21-year-old student, said she was not very worried about safety for Friday’s show.

“After the accident at Mirror’s concert, I believe the government and the Leisure and Cultural Services Department will have stringent checks for Lam’s show,” she said.

Chan said she would not mind if the show did not have fancy stage sets. “The first priority should be the safety of the artist,” she said.

Another concertgoer, Yolanda Yau Nok-lam, 22, said her major concern was the audience.

“Since the accident happened quite recently, I think the audience’s emotions will more or less be affected,” she said.

“I did not sleep well that night after watching the video clip of the accident at Mirror’s concert, so I am quite worried if I will feel panicked when I visit the Hong Kong Coliseum.”

But Yau said she believed the government would monitor safety at Lam’s concert carefully.

Concertgoer Ken Kwong, 18, said that while he did not worry about Lam’s safety at all, the show was admittedly slightly less enjoyable due to the restrictions.

“Since all mid-air mechanical devices are banned, the stage effects might be fewer, but that doesn’t affect much,” the student said.

Anna Choi, a fan in her 30s, said Lam’s style of performance differed very much from Mirror’s, so she believed the show would still be enjoyable despite fewer stage effects.

“We actually do not expect his show to have much stage effects, even if he just sits there and sings, we will be very happy already,”’ the clerk said.

Toby Law, 40, a part-time administrator, said going to the venue would still remind her of the accident, but believed more checks would be done to ensure safety.

“We have to move on and enjoy tonight’s show,” she said, adding that people should not dwell on an accident that happened in the past.