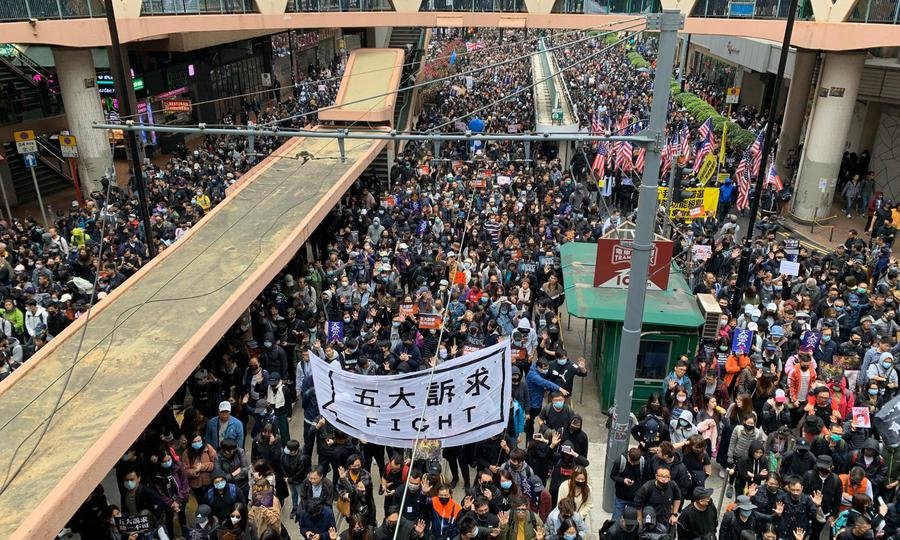 On New Year’s Eve, peaceful protests had descended into tear gas-choked clashes between hardcore and police

Tens of thousands of pro-democracy protesters thronged the streets of Hong Kong for a massive rally on New Year’s Day as demonstrators look to carry the momentum of their months-old movement into 2020.

Hong Kong has been battered by nearly seven months of unrest, which was sparked by a proposal to allow extraditions to mainland China but morphed into a larger revolt against what many fear is Beijing’s tightening control.

Demonstrators gathered in Victoria Park to march across Hong Kong’s main island, through the Causeway Bay district – usually packed with tourists and shoppers – to Central, the commercial heart of the international financial hub.

“It is sad that our demands from 2019 need to be carried forward to 2020,” said Jimmy Sham of the Civil Human Rights Front, the umbrella group that organized the rally to put pressure on the city’s government to respond to protesters’ demands.

“We are expecting more repression to come. We have to actively prepare for the fight,” he told the gathered crowds before the march started.

Many carried banners listing their main demands, including fully free elections in the city, an independent inquiry into the police handling of the protests, and amnesty for the nearly 6,500 people arrested during the movement, nearly a third of them under the age of 20.

Along with huge peaceful rallies, the semi-autonomous city has also witnessed violent clashes, in which the police have fired tear gas and rubber bullets, while protesters have lobbed petrol bombs.

Activists have accused the police of brutality and rights violations, while city authorities – and the central government in Beijing – have accused pro-democracy protesters of rioting.

China has also alleged that the unrest has been fanned by foreign powers, and has bristled at criticism from rights groups and governments of the way the protests have been handled so far.

Organizers had received permission from Hong Kong authorities for the New Year’s Day march, but groups of police in riot gear were present near some parts of the planned route and an AFP reporter saw them stop and search a dozen people.

Hong Kong saw in the new year with an evening of peaceful protests that descended into tear gas-choked clashes between hardcore demonstrators and the police overnight.

Thousands of people linked arms to form human chains that stretched for miles along busy shopping streets and neighborhoods on New Year’s Eve. Later, protesters set fire to barricades in some parts of the city as the police launched 2020’s first volleys of tear gas and used water cannon to disperse the crowds.

The protest movement has become quieter since the city’s pro-democracy camp scored a landslide victory in a municipal-level vote in November – seen as a referendum on the Beijing-backed government – and violent clashes at some of the city’s university campuses.

But protesters have vowed to continue their fight for greater freedoms.

“Hong Kong’s rule of law, human rights, freedom have been eroded gradually,” a masked protester said in a speech at the rally on Wednesday.

“Hong Kong people have been pushed to a hopeless situation. That’s why today we have to come out.”

The unrest that began in June last year is the biggest crisis the former British colony has faced since its return to Chinese rule in 1997.

Under the terms of that handover, Hong Kong enjoys unique freedoms unseen on the mainland, but fears have increased in recent years that they are being chipped away as Beijing exerts more control over the territory.